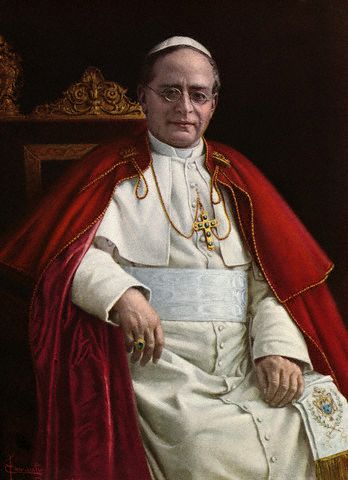 On the correct understanding of Christian and religious unity, and the growth of the “ecumenical” and “interfaith” movement that was starting in his time, Pope Pius XI warned…

“When the question of promoting unity among Christians is under consideration many are easily deceived by the semblance of good. … Yet beneath the coaxing words there is concealed an error so great that it would destroy utterly the foundations of the Catholic Faith.”

“They, therefore, who profess themselves Christians cannot, We think, but believe in Christ’s establishment of one Church and only one. Yet when one asks what that Church by the will of its Founder ought to be, then not all agree. Indeed a great many deny, for example, that Christ’s Church ought to be visible – at least in the sense that it should stand forth as one body of faithful united in one identical doctrine and under one authority and rule. On the contrary, by a visible Church they understand nothing but a society formed by various Christian communities, even though these adhere to different and even mutually contradictory doctrines.”

“And here there is presented the opportunity to set forth and remove a falsity upon which, it seems, this whole question hinges, and from which is drawn the multiple effort of the non-Christians who strive, as We have said, for the confederation of the Christian churches.

The authors of this plan are in the habit of quoting the words of Christ: That ye all may be one. . . . There shall be one fold and one shepherd, (John 17, 21; 10, 16), yet in the sense that these words express a desire and a prayer of Jesus Christ which thus far has lacked all effect. They contend that the unity of faith and governance which is the sign of the true and one Church of Christ, has almost never existed up to this time, and does not exist today; that it can be wished for and perhaps sometime be obtained through common submission of the will, but meanwhile it must be considered a fiction.

They say, moreover, that the Church by its very nature is divided into parts; that it consists of many churches or particular communities which are separated among themselves and, although they have certain points of doctrine in common, differ in others; and that at most the Church was the one Church and only Church between the Apostolic Era and the first Ecumenical Councils.

Therefore, they say, the controversies and old differences of opinion, which to this day divide the Christian name, should be put aside, and with the remaining doctrines there should be formulated and proposed a common rule of faith, in the profession of which all can know and feel themselves brothers. United by some sort of universal covenant, the multitude of churches or communities will then be in a position to oppose fruitfully and effectively the progress of unbelief. This, Venerable Brethren, is the more general opinion.

There are, however, some among them who assume and grant that Protestantism, as they call it, has rejected very inadvisedly certain articles of faith and certain rites of external worship that are fully acceptable and useful, which the Roman Church still preserves. But they add immediately that the Church has corrupted the early religion by adding to it and proposing for belief certain doctrines that are not only foreign to, but are opposed to, the Gospel – among which they bring forth chiefly that of the primacy of jurisdiction assigned to Peter and his successors of the Roman See.”

“Admonished, therefore, by the consciousness of Our Apostolic office that We should not permit the flock of the Lord to be cheated by dangerous fallacies, We invoke, Venerable Brethren, your zeal in avoiding this evil;”

From Pope Leo XIII on the true meaning of “unity” in the Church
SATIS COGNITUM, JUNE 29, 1896

The Church, founded on these principles and mindful of her office, has done nothing with greater zeal and endeavour than she has displayed in guarding the integrity of the faith. Hence she regarded as rebels and expelled from the ranks of her children all who held beliefs on any point of doctrine different from her own. The Arians, the Montanists, the Novatians, the Quartodecimans, the Eutychians, did not certainly reject all Catholic doctrine: they abandoned only a tertian portion of it. Still who does not know that they were declared heretics and banished from the bosom of the Church? In like manner were condemned all authors of heretical tenets who followed them in subsequent ages.

“There can be nothing more dangerous than those heretics who admit nearly the whole cycle of doctrine, and yet by one word, as with a drop of poison, infect the real and simple faith taught by our Lord and handed down by Apostolic tradition” (Auctor Tract. de Fide Orthodoxa contra Arianos).

The practice of the Church has always been the same, as is shown by the unanimous teaching of the Fathers, who were wont to hold as outside Catholic communion, and alien to the Church, whoever would recede in the least degree from any point of doctrine proposed by her authoritative Magisterium…

Is Ecumenism Biblical? Should a Christian be Involved in the Ecumenical Movement?

Jesus prayed for unity (the unity in TRUTH)  at the Last Supper, “That they all  [his disciples] may be one, as thou, Father, in me, and I in thee; that they also may be one in us; that the world may believe that thou hast sent me” [Jn 17:21).  The Decree on Ecumenism (on November 21, 1964) set the stage for the last fifty years of Catholic dialogue and conversation with our Orthodox, Protestant and Anglican brothers and sisters.

Nevertheless, for the last fifty years, Ecumenism has developed into a New Age “Novus Ordo” religion where anyone is allowed to believe anything except Biblical Christianity.  Today, Ecumenical Movement has become the driving force behind the formation of a one world religion joining all into one. In this Ecumenical Movement, every religion is considered legitimate. Ecumenism refuses to identify any minister as being unrighteous. No one is allowed to criticize anyone else’s religion.

“Ecumenism is the poison which has destroyed the Catholic Faith in our Catholic institutions. The Catholic Church, and it alone, was founded by Christ. Therefore anything outside of its boundaries is a false religion. This doctrine is absolutely essential to Catholicism. Ecumenism, however, destroys this doctrine, and consequently destroys the faith’s adherence with firmness and supernatural certitude to Catholic teaching.” ~ Bishop Donald Sanborn.

“Bear not the yoke with unbelievers. For what participation hath justice with injustice? Or what fellowship hath light with darkness?” ~ Corinthians 6:14, Douay-Rheims.

“I wonder that you are so soon removed from him that called you into the grace of Christ, unto another gospel. Which is not another, only there are some that trouble you, and would pervert the gospel of Christ. But though we, or an angel from heaven, preach a gospel to you besides that which we have preached to you, let him be anathema.” ~ Galatians 1:6-8, Douay-Rheims.

Prayer to Mary, Help of Christians

Immaculate Virgin, Mother of God and our Mother, Mary, thou seest the attacks that are everywhere made by the devil and the world upon the Catholic Faith, in which, by God’s grace, we intend to live and die, in order that we may attain to eternal glory. Do thou, the Help of Christians, renew thine ancient victories and save thy children. They entrust to thee their firm purpose never to enroll themselves in societies hostile to our holy Religion; do thou, who art all holy, present to thy Divine Son our good resolutions, and obtain for us the grace we need to be unshaken in their observance, even to the end of life. Console the visible Head of the Church, sustain the Catholic Episcopate, protect the clergy and people who proclaim thee Queen; by the power of thine intercession hasten the day when all nations shall be gathered at the feet of the chief Shepherd. Amen.