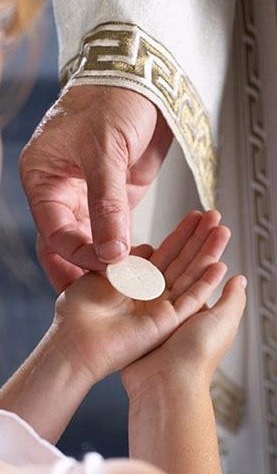 I wish to acknowledge my debt to Mr. Byron Harries for allowing me to make use of his researches into the Fathers on the question of Communion in the hand; for his kindness in travelling from Wales to Oxford to verify the quotations from the original sources, and for making the translations from the Greek. I am also indebted to Fr. W. Lawson, S.J., for translating the passage from Bucer’s Censura. M.D.

An Artificial Consensus and Mind Manipulators

A most depressing aspect of contemporary life is the manner in which those who control the media are able to fabricate an artificial consensus. The people of South Vietnam were handed over to a Communist dictatorship principally as a result of the consensus against the war fabricated throughout the West by the Liberal-controlled media. The fundamental axiom of that Liberalism condemned by the Popes for centuries is that each individual has the right to construct his own code of morality. Society at large has already come to accept this concept. Women who murder their unborn babies are exercising their “right to choose”. Literature that was once termed pornographic has been re-classified as “adult”. Perverts who were once looked upon as sick individuals, and from whom society needed to be protected, are now regarded as minority groups with an “alternate” [but legitimate] lifestyle. Even Catholic bishops treat them with far more sympathy than they do Catholic traditionalists.

I have described and documented in my book, Pope John’s Council, the manner in which the Fathers of Vatican II were caught up in an artificially created consensus, which resulted in most of them abandoning the attitudes of a lifetime almost overnight. There can have been few more dramatic examples of mass conditioning since Hitler hypnotized the German people. It still seems hard to believe that almost all the three-thousand [almost totally orthodox] Catholic bishops who entered St. Peter’s Basilica on Oct. 11, 1962, would emerge from it on December 8, 1965, as little more than programmed puppets, men who were happy to abandon the accumulated wisdom and spirituality of 2,000 years in favor of the clichés fabricated by the Liberal “experts’, and repeated ad nauseam in the media they controlled as `new insights’ in tune with the contemporary mentality. If any proof is needed that the bishops have made themselves the creatures of their own “experts”, it can be found in the imposition of Communion in the hand upon the faithful at the command of these “experts”.

Once a consensus has been established within any social group, it is very hard for individuals to resist conforming. When an individual does refuse to conform, he is more likely to be rejected by the group than to affect the attitude of an appreciable number of its members. Sometimes this is all to the good, often the opposite is true. Those who cheered Jesus on Palm Sunday and called for His death on Good Friday were just going along with the majority. Two collegial decisions of the episcopal college which took place at the same time are recorded by St. Matthew: “Peter saith to Him: `Yea, though I should die with Thee I will not deny Thee. And in like manner said all the disciples [Matt. XXVI, 35]”. But in verse 56 we read: “Then the disciples, all leaving Him, fled.” However, one Apostle did take his place at the foot of the Cross–but it was NOT St. Peter. The principle that “where Peter is, there is the Church” applies usually, but not invariably.

This is not the place to discuss in detail the technique of group dynamics employed to brainwash whole groups into submerging their individual intellects and wills into the collective mind of the group. Where any individual puts up significant resistance, the manipulators [correctly] assess that it would be counter-productive to devote excessive effort to winning him over. They realize that it is control of the group which matters; the recalcitrant individual, therefore, is simply isolated.

Fr. Paul Crane, S.J., has remarked to me that since Vatican II the Church throughout the West has been subjected to a conditioning process on a global scale. He considers that traditionalists have been very effectively isolated from the main group of Catholics and that as long as our ability to influence the conditioned group is minimal, the manipulators are not too worried about us. As I shall show in detail later in this study, the ordinary faithful are being induced to abandon the traditional manner of receiving Holy Communion by propaganda violating the basic norms of natural [let alone Christian] ethics; propaganda which offends acceptable standards of scholarship, semantics, and straightforward honesty. Ethical or not, such techniques can be effective. The Nazis proved that the constant propagation of false or slanted information would eventually convince the ordinary German, who was not able or, more likely, would not trouble, to consult alternative sources 1 of information. Stalin observed that most people do not have critical minds. Most are content to accept that official information is correct information. Thus, in an editorial on May 21, 1976, The Universe [Britain’s largest Catholic weekly] informed its readers that:

The ordinary Catholic would not read this and ask himself: “Is it true?” He would accept that it was true simply because he had read it in The Universe. It would be unrealistic to expect him to react in any other way. He will therefore remain unaware of the fact that the Pope has made it quite clear that he wishes the faithful to adhere to the traditional manner of receiving Holy Communion; that a minority of English bishops fought the innovation tooth and nail; or that the traditional manner of reception did not detract from the dignity of a Baptized Christian as a Temple of the Holy Ghost but was intended to emphasize the nature of the Blessed Sacrament as the Body of Christ. The Protestant Reformers abolished the traditional practice to emphasize their belief that the Eucharist is NOT the Body of Christ, and yet The Universe claims, without a word of explanation, that this innovation emphasizes the Real Presence, secure in the knowledge that this gratuitous and nonsensical assertion will remain unchallenged, or that, if a challenge does come, it can be suppressed and kept from the knowledge of its readers.

The example par excellence of the manner in which Catholics can be conditioned is found in the case of Archbishop Marcel Lefebvre. A detailed analysis of his writings and sermons reveals that all

1 The Great Terror (Pelican edition), p. 740. he is doing is to uphold what was the norm before the Council, and for doing this he has been threatened with excommunication and even described as a renegade.

Yesterday’s orthodoxy has become today’s heresy. Catholics who would never have set foot inside a Protestant church, because their parish priest told them not to, will now trudge along dutifully to tedious `unity’ services because he tells them that they must. He tells them this because it is what his bishop has ordered; and the bishop in turn is simply passing on directives received from the Vatican. At no level of the pyramid is there any general realization of inconsistent or illogical behavior– anyone who questions the wisdom of contradicting an attitude to heresy dating back to the Apostolic Church is written off as a crank. Much would be explained if only one could learn with certainty who in [or outside] the Vatican initiates the directives and reforms which are destroying the Faith.

Communion in the Hand and Similar Frauds by Michael Davies

On Communion in the Hand and Similar Frauds


Michael Davies (1936 – 2004) is most known for his work on the liturgical revolution in the Catholic Church following the Second Vatican Council. In 1995 Michael Davies was elected President of the International Federation Una Voce, a position that gave him greater international status and a much higher ‘official’ profile which allowed him access to the major Vatican departments. He became a respected visitor to the Congregations for the Doctrine of the Faith, of Divine Worship, and the Ecclesia Dei Commission.

‘I have been profoundly touched by the news of the death of Michael Davies. I had the good fortune to meet him several times and I found him as a man of deep faith and ready to embrace suffering. Ever since the Council he put all his energy into the service of the Faith and left us important publications especially about the Sacred Liturgy. Even though he suffered from the Church in many ways in his time, he always truly remained a man of the Church. He knew that the Lord founded His Church on the rock of St Peter and that the Faith can find its fullness and maturity only in union with the successor of St Peter. Therefore we can be confident that the Lord opened wide for him the gates of heaven. We commend his soul to the Lord’s mercy.’