Virgo Sacrata’s votive candles are made from 100% pure, highest quality Canadian beeswax with a burn time of over 15 hours! Each set comes with 2 votive cups with “Mary Help of Christians” glass holders. Glass containers can be reused with our refill candles. By purchasing beeswax candles from us, you are agreeing that you have read “My Candle Care & Safety Tips” and agree to Virgo Sacrata’s “terms and conditions“.

Light a candle in honour of Our Lady Mary Help of Christians.  Virgo Sacrata’s votive candles are made of 100% pure beeswax, intended to be burnt as a votive offering in an act of Christian prayer and as a Marian devotion under the title of “Sancta Maria Auxilium Christianorum”. The flame of a candle symbolizes both the presence of God who illuminates the world and our prayer which continues without us and which rises towards him.

Mary Help of Christians – some facts to know:

The first Christians in Greece, Egypt, Antioch, Ephesus, Alexandria and Athens called the Blessed Virgin Mary with the name of “Help of Christians”.

Saint John Chrysostom was the first person to use this Marian title in year 345 as a devotion to the Virgin Mary.

“Beneath Thy Protection” (Greek: Ὑπὸ τὴν σὴν εὐσπλαγχνίαν; Latin: Sub Tuum Praesidium) is a Christian hymn. It is the oldest preserved extant hymn to the Blessed Virgin Mary as Theotokos. In the Roman Rite of the Catholic Church it is used as the antiphon for the Nunc Dimittis at Compline in the Little Office of the Blessed Virgin Mary.

In 1572, during the expansion of the Islamic Ottoman Empire intended to invade Christian Europe, Pope Pius V invoked Christian armies and its victory achieved was consequently attributed to the intercession of Mary under this title.

In 1814 Napoleon signed his abdication and in 1815, when the Church recovered its position and its spiritual power, Pope Pius VII established on May 24 the feast of Mary Help of Christians to perpetuate the memory of his return to Rome following his imprisonment.

Later in 19th century, the spread of devotion to Mary Help of Christians is attributed to St. John Bosco, who chose her as the main patroness of the Salesian Family and its works.

Today, despite St. Paul’s teaching, many Catholics do not take seriously their obligation to wage war against the demonic forces. It is for this reason the Association of the Auxilium Christianorum was founded. 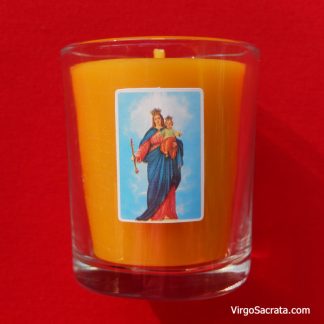