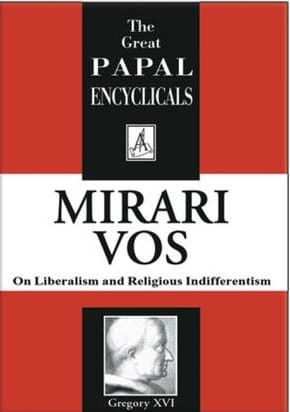 “Now We consider another abundant source of the evils with which the Church is afflicted at present: indifferentism. This perverse opinion is spread on all sides by the fraud of the wicked who claim that it is possible to obtain the eternal salvation of the soul by the profession of any kind of religion, as long as morality is maintained. Surely, in so clear a matter, you will drive this deadly error far from the people committed to your care. With the admonition of the apostle that “there is one God, one faith, one baptism” may those fear who contrive the notion that the safe harbor of salvation is open to persons of any religion whatever. They should consider the testimony of Christ Himself that “those who are not with Christ are against Him,” and that they disperse unhappily who do not gather with Him. Therefore “without a doubt, they will perish forever, unless they hold the Catholic faith whole and inviolate.””

The Mirari Vos is an effective antidote for any corruption of doctrinal truth, which exposes the modern-day heresy and blasphemy concerning the “Document on Human Fraternity for World Peace and Living Together” signed by Pope Francis On February 4th, 2019. Evil is gaining power under the disguise of good, disguised as the Great Humanitarian he will talk peace, – but it can only flourish if the good stay silent.

In the early 1800s, the Church in France, infected by the Revolution of 1789, turned to its charismatic philosopher and apologist, Abbe Felicite-Robert de Lamennais, promoter of a movement to “catholicize liberalism.” He expounded an alien philosophy based on a new theory of certitude claiming truth does not belong to individual reason, but to the universal consent of mankind. According to him, certainty of truth was not determined by evidence, but by the authority of mankind. The true religion, he concluded, is that which can put forth on its behalf the greatest number of witnesses.

His opinions on liberty of press, conscience, revolt, and democratization of the Church, were receiving popularity. This caught the attention of Pope Gregory XVI, who condemned them in Mirari Vos (15 August 1832).

De Lammenais refused to submit and renounced his priesthood and Catholicism. He died unrepentant and unreconciled with the Church.

Pope Gregory XVI condemned freedom of conscience: “This shameful font of [religious] indifferentism gives rise to that absurd and erroneous proposition which claims that liberty of conscience must be maintained for everyone.” Pope Pius IX reiterated this condemnation in 1864, in the encyclical Quanta Cura.

“From this poisoned source of indifferentism flows that false and absurd, or rather extravagant, maxim that liberty of conscience should be established and guaranteed to each man – a most contagious error, …” ~ Pope Gregory XVI in Mirari Vos.

To All Patriarchs, Primates, Archbishops, and Bishops of the Catholic World.

Given in Rome at St. Mary Major, on August 15, the feast of the Assumption of the Virgin, in the year of Our Lord 1832, the second year of Our Pontificate.