The Faith of Our Fathers

The Faith of Our Fathers: a Plain Exposition and Vindication of the Church Founded by Our Lord Jesus Christ is a book by archbishop James Gibbons published in Baltimore in 1876, which became a best-selling conversion manual in the United States.  Paperbound, 352 Pages,  5.5″ x 8.5″

Send Inquiry for The Faith of Our Fathers

The Faith of Our Fathers is and always has been an incredibly popular and successful book explaining the basic tenets of the Catholic Faith and why we hold them. It delves into the historical background of virtually everything people find hard to understand about our religion, such as priestly celibacy, sacred images, the Church and the Bible, the primacy of Peter, Communion under one kind, invocation of the Saints, etc. First published in 1876, when there was much anti-Catholic sentiment in the United States, the book sold 1.4 million copies in forty years and has been reprinted many times since. It is being reprinted once again by popular request. This book will confirm one’s faith in the truth of the Catholic Church like none other and will arm the reader to answer the questions so often posed by skeptics and unbelievers.

Is it Lawful to Honor the Blessed Virgin Mary as a Saint, to Invoke her as an Intercessor, and to Imitate her as a Model?

Sacred Images
Purgatory, and Prayers for the Dead
Civil and Religious Liberty
Charges of Religious Persecution 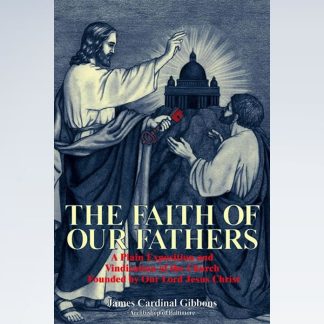