“They Have Uncrowned Him” by Archbishop Lefebvre

One of the main battles of Archbishop Lefebvre was the social Kingship of Christ and he exposed this in his book, They have Uncrowned Him. Includes Card. Ottaviani’s “On the Relations Between Church and State” and “On Religious Tolerance”. Softcover, 264 pages. Ships within 1 week.

Send Inquiry for “They Have Uncrowned Him” by Archbishop Lefebvre

The Summa of Archbishop Lefebvre

They Have Uncrowned Him – From Liberalism to Apostasy: The Conciliar Tragedy. One of the main battles of Archbishop Lefebvre was the social Kingship of Christ and he exposed this in his book. Based on the teaching of the Popes, he shows that one of the main errors of the enemies of the Church that has sadly been accepted at Vatican II, was the separation of Church and State. It is the worst social effect of what is called “liberalism”.

This book covers the origins of liberalism, the subversion of orthodoxy by Vatican II, the decline of the missionary spirit by dialogue, the bad fruits of post-Conciliar reforms, and his vision of restoration. Most importantly, Archbishop Lefebvre explains how the revolutionaries in the Church managed to dethrone Christ the King, both ecclesiastically and temporally.

Includes Card. Ottaviani’s “On the Relations Between Church and State” and “On Religious Tolerance”, replaced at Vatican II by Dignitatis Humanae.

‘It is of immense importance that English-speaking readers should read, mark, learn and inwardly digest this book of Archbishop Lefebvre, They Have Uncrowned Him.

The Archbishop here denounces in depth the great plague of modern times, which has virtually destroyed Christian civilisation and is now wrecking the Catholic Church. That plague is Liberalism, or man’s freeing himself with all his heart, with all his soul, with all his strength and with all his mind, from God.

Where did Liberalism come from? How is it so strong? How has it penetrated even into the Catholic Church? Alas, there is in English very little literature available on the subject. This is because England is steeped in Liberalism and has spread her liberal influences throughout the world, especially the English-speaking world, ever since that terrible 16th century, when King Henry VIII began to split the Church of England from the Church in England, and the mass of Englishmen followed in his footsteps, putting earthly king in front of Heavenly King, patriotism (so-called) in front of religion, country in front of God.

The problem extends far wider now than just poor England. The Church of Rome is being split from the true Church in Rome, as Our Lady of La Salette said it would. Despite her warning, Liberalism and Catholicism is confused in millions of Catholic minds.

In this book, Archbishop Lefebvre puts the crown firmly back on the head of our Heavenly King, Jesus Christ. Thank God, English-speaking readers have made this third edition necessary. All is not lost. May they make fourth, fifth and sixth editions necessary’. 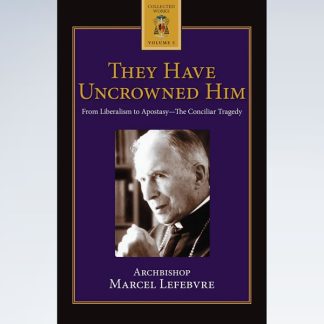 You're viewing: “They Have Uncrowned Him” by Archbishop Lefebvre US$ 19.00
Add to cart