An Open Letter To Confused Catholics by Archbishop Marcel Lefebvre is a popular study of the crisis in the Church written for all to understand.

“Open Letter To Confused Catholics” by Archbishop Marcel Lefebvre is a popular study of the crisis in the Church written for all to understand. Covers the Mass, Sacraments, Priesthood, the New Catechisms, Ecumenism, etc., and demonstrates the new spirit in the Church which has caused doubt and confusion among the faithful. Has served as a beacon for thousands; certain to become a classic. Please read chapter 18 about the True and False Obedience a sample text from the book.

1. Why are Catholics Confused?

2. “They Are Changing Our Religion!”

3. What They are Doing to the Mass?

4. The Mass of All Times versus the Mass of Our Time.

6. The New Forms of Baptism, Marriage, Penance and Extreme Unction.

14. “Vatican II is the French Revolution in the Church.”

15. The Marriage of the Church and the Revolution

16. Neo-modernism or the Undermining of the Faith

19. The Ecône Seminary and Rome

21. Neither a Heretic nor a Schismatic

22. What Families Can Do

23. Building Up Verses Pulling Down

While presenting in English Archbishop Lefebvre’s recently published book (his only one apart from some collections of addresses), I feel there is a need also of some words of introduction to the author himself – so well known by the name, but so little known as he truly is.

Beginning life in an exemplary Catholic family of the north of France, Marcel Lefebvre knew his vocation from an early age. He joined the Holy Ghost Fathers, and, after the usual training, his life was that of a missionary and seminary professor. It became recognized that he had, to an exceptional degree, the qualities of a bishop, and he was promoted to Archbishop of Dakar and eventually became Apostolic Delegate, the Pope’s representative, to all of French speaking Africa. For six years he was also Superior General of his Order, the largest of the missionary congregations.

So Archbishop Lefebvre is, first and foremost, a missionary bishop, and typical of what a bishop should be. His qualities are not showy, they are those of a Christian ruler, which is what a bishop is: reliability, straightforwardness, calmness, approachability, with the capacity for making decisions and sticking to them. Such a man would never, in ordinary times, have been controversial, he would have continued administering and inspiring day‑to‑day work of the missions until his eventual retirement to the position of “elder statesman.” What brought him into the limelight, and made him an object of opprobrium – or admiration – all over the Catholic world, is the revolutionary situation in the Church – it is nothing less – that has been developing since the Second Vatican Council.

There is no need for me to enlarge on that situation now: it is the subject matter of this book, the first part of which is a factual study of what is going on in the Catholic Church, while in the second part, the causes of it are examined. Here readers will also find the answers to their questions about the author’s personal involvement.

The Archbishop’s wide experience makes his analysis an authoritative one. His writing has also a quality that may be unexpected, for all who have only heard about him – it is so eminently reasonable. If he is a “rebel;” (as we never cease being told!), he is an uncommonly calm and courteous one. If this comes as a surprise, it is because he has been given little opportunity to make himself known. He has been conveniently buried in silence, except when quoted as an example of obstinate backwardness, by all who are embarrassed by the accusations he makes, or simply the positions he adopts. In view of this, the publishing of this book is a belated act of justice.

He causes embarrassment in the manner of the little boy in Hans Christian Andersen’s parable, who alone spoke the obvious truth: “The Emperor has no clothes!” Among the chorus of satisfaction at the renewal of the Church by Vatican II, the Archbishop asks what, precisely, this renewal consists in. And he points out the facts that can be shown by statistics: the dramatic decline in baptisms, confirmations and ordinations, in the number of monks and nuns, and of schools; not to mention the confusion among the faithful, especially the rising generation, about what Catholic belief is. In this situation, he asks first and foremost for truthfulness (which in revolutions is always one of the first casualties)-truthfulness as to the facts of the present situation, and also with regard to the established teaching of the Church. He knows that the blurring with a view to some immediate advantage is disastrous for the faith of Catholics, and unjust to the others for whose supposed benefit it is usually done. His frank acceptance of established doctrine gives the Archbishop’s writing another characteristic that one is grateful for: its perfect clarity. He knows his mind because he knows what his faith is.

It is likely that some who read these pages will be alerted for the first time to the extent of the disintegration of the Catholic Church. If they are shocked into a realization that a revolution is in progress which, if it continues, will eventually engulf their parish also, they may nevertheless find some of the Archbishop’s language a little exaggerated: he may seem too absolute. How, for example, can he calmly dismiss as unfit for Christian ideas like Liberalism, Religious Liberty and Socialism?

Here, a word of explanation is called for. We must remember that His grace is writing against the background of France, where ideas are generally more clear‑cut than they are in Great Britain, or at any rate, in England. Take the word “socialism,” for example; that means to some of us, first and foremost, a social ideal of brotherhood and justice. We have had our Christian socialists. On the Continent, however, Socialism is uncompromisingly anti‑religious, or almost a substitute for religion, and Communism is seen as the natural development from it. This is the Socialism the Archbishop is writing about. And when he rejects Liberalism, he is not thinking of the Liberal Party, or of the virtue of liberality, but of that religious liberalism that exalts human liberty above the claims of God or of His Church, and which Newman said that it had been his life’s work to combat. It is because Vatican II’s Declaration on Religious Liberty contains phrases that encourage this liberalism that the Archbishop asks for its revision.

Modernism, too, has a special meaning: not a simple urge to be up‑to‑date, but the particular system of ideas which was condemned by Pope St. Pius X on the grounds that, on the pretext of making Revelation acceptable to the modern mentality, it destroyed the very foundations of belief in revealed Truth. And while making these clarifications, we may mention the word “Revolution,” as used by the author. Sometimes he is referring to the French Revolution of 1789, with its slogan of “Liberty, Equality, Fraternity”; but he also, especially in Chapter XV, uses the word to indicate the general revolt against the Church which made its appearance in some aspects of the Renaissance, was nurtured by the Freemasons, burst out violently in 1789, and proceeded to produce Marxist Communism. The same rejection of God and His Revelation inspires all these.

A Catholic facing the evidence of disintegration presented here might well be tempted to despair. Archbishop Lefebvre does not despair because he knows that the Church, despite all appearances, is guaranteed by Our Lord Jesus Christ as being His chosen representative on earth, by which He conveys to all men the benefits of the Redemption. It is this unwavering faith that gives him what is perhaps his outstanding quality – the courage that was needed to stand firm, isolated, against the urgent pressures of those who were ready to welcome him with open arms in return for some simple compromise. So exposed a position is perilous and, and he has a right to expect the support of the prayers of those of us who recognize his special service to the Church: that of training priests and nuns who preserve the tried traditions that are the foundation on which an eventual, true renewal can be based.

Though responsibility for the translation is mine, it has been a team enterprise, which will have its sufficient reward in the appearance of the book. Credit for it is due first to Mr. John Noon, who broke the back of the work, and also, for different sections, to Mr. Malcolm Potter and to Father Philip M. Stark; and not least to Mrs. Ann Nott for typing the scripts for printing. 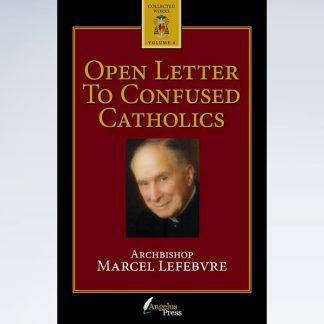 You're viewing: Open Letter to Confused Catholics €22.23
Add to cart