Catechism of The Council of Trent

If you don’t have it, buy it; if you’ve bought it, read it; if you’ve read it, read it again! 714 pp HB Impr. Compiled under the direction of St. Charles Borromeo and recognized as the most authoritative Catholic catechism.

Send Inquiry for Catechism of The Council of Trent

Catechism of The Council of Trent is an important resource in our time of doctrinal confusion offering precise, simply – worded answers to questions about the Faith in a style different from more recent catechisms. This 1923 translation by the Dominicans John A. McHugh and Charles J. Callan is unsurpassed for accuracy and readability, and features many useful extras.

For more than four centuries it was known simply as The Roman Catechism – the source, guide and standard for all other catechisms. Commissioned by the Council of Trent, written under the supervision of Saint Charles Borromeo, and promulgated by Saint Pius V in 1566, it was the most comprehensive and authoritative statement of Catholic doctrine ever published.

Leo XIII recommended two books — the Summa and this Catechism — for all seminarians! Pope Benedict 16th, as a Cardinal, called it the most important Catholic Catechism. Originally designed to supply parish priest with an official book of instruction, it has been used extensively by the laity as a steadying guide in our confused age. New typesetting and beautiful hardbound cover.

All the doctrines of the Faith are expounded under four headings: The Apostles’ Creed, The Sacraments, The Ten Commandments, and the Lord’s Prayer. Includes a complete “Sermon Program” for Sundays and Feasts linking doctrinal material in the Catechism to the Epistles and Gospels. Contains complete texts of definitions and dogmatic statements since Trent, subheadings for ease of reading & quick reference, useful citations to passages of Saint Thomas Aquinas and others. Translator’s introduction gives historical background, extremely detailed Table of Contents and Subject Index.

The Council of Trent, held in the sixteenth century, was one of the Church’s most important Ecumenical Councils. It was presided over by Popes Paul III, Julius III, and Pius IV. The Council played a major role in the Counter-Reformation against Martin Luther’s principles and was itself a significant reform conference. Its main objectives were to condemn the doctrines of Protestantism, effect a reformation in the Church’s discipline, make known the fact that the Church’s interpretation of Scripture is final, and define the relationship of faith and works in relation to salvation. Also, an important point of discussion was the Real Presence and sacrificial nature of the Eucharist. The Council of Trent convened in 1545 and ended in 1563.

Catechism of The Council of Trent 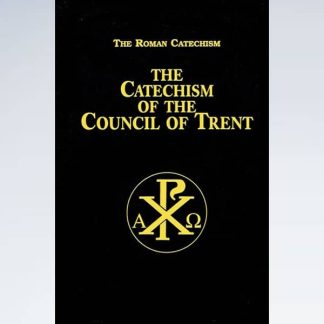 You're viewing: Catechism of The Council of Trent US$ 49.00
Add to cart