The Canons and Decrees of the Council of Trent

Complete translation of the documents of the Council of Trent (1545-1563) including the bulls of convocation, the opening and closing addresses to the Council Fathers, the documents of deliberation and the canons of the council. Paperbound, 320 Pages. Dimensions: 5.5  x 8.5 inch.

The Council of Trent, held in the sixteenth century, was one of the Church’s most important Ecumenical Councils. It was presided over by Popes Paul III, Julius III, and Pius IV. The Council played a major role in the Counter-Reformation against Martin Luther’s principles and was itself a significant reform conference. Its main objectives were to condemn the doctrines of Protestantism, effect a reformation in the Church’s discipline, make known the fact that the Church’s interpretation of Scripture is final, and define the relationship of faith and works in relation to salvation. Also an important point of discussion was the Real Presence and sacrificial nature of the Eucharist. The Council of Trent convened in 1545 and ended in 1563.

This reprint of Fr. Schroeder’s translation of The Canons and Decrees of the Council of Trent elucidates for contemporary Catholics the momentous accomplishments of this council. Simultaneously, it demonstrates the authority and clarity with which the Church makes her official pronouncements.

The Canons and Decrees of the Council of Trent Covers such Topics as:

The Council also called for a revised Breviary, a formal catechism (the Catechism of the Council of Trent) and the standardization of the Roman Missal. It is universally regarded as the greatest of the twenty-one Ecumenical Councils of the Catholic Church. 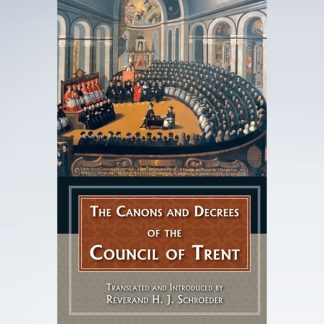 You're viewing: The Canons and Decrees of the Council of Trent €19.44
Add to cart