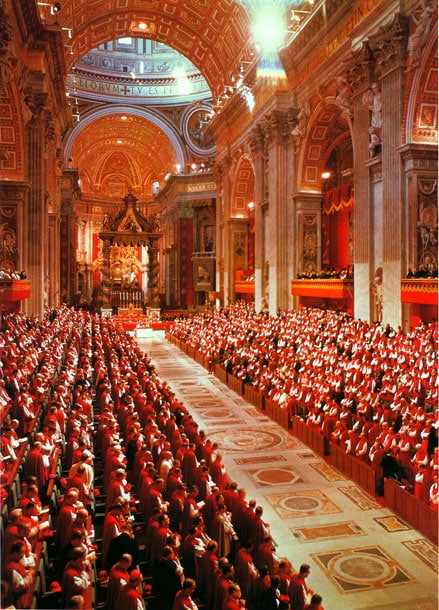 The liturgical heritage of the Roman Rite may well be the most precious treasure of our entire Western civilization, something to be cherished and preserved for future generations.

The Liturgy Constitution of the Second Vatican Council stated that:

“In faithful obedience to tradition, the sacred Council declares that Holy Mother Church holds all lawfully recognise rites to be of equal right and dignity, that she wishes to preserve them in future and foster them in every way.”

If that were true, …indeed.

“We must strip from our Catholic prayers and from the Catholic liturgy everything which can be the shadow of a stumbling block for our separated brethren that is for the Prostestants.” (Archbishop Annibale Bugnini, main author of the New Mass, L’Osservatore Romano, March 19, 1965.)

“The introduction of the vernacular will certainly be a great sacrifice for those who know the beauty, the power and the expressive sacrality of Latin. We are parting with the speech of the Christian centuries, we are becoming like profane intruders in the literary preserve of sacred utterance. We will lose a great part of that stupendous and incomparable artistic and spiritual thing, Gregorian chant.” ( Paul VI)

“For pity sake, end the Council quickly.”
“In this time of darkness, let us pray. Let us do penance for the elect”;
(Padre Pio)

Father Joseph Gelineau SJ, a Council peritus, and an enthusiastic proponent of the postconciliar revolution. In his book Demain la liturgie, he stated with commendable honesty, concerning the Mass as most Catholics know it today: “To tell the truth it is a different liturgy of the Mass. This needs to be said without ambiguity: the Roman Rite as we knew it no longer exists. It has been destroyed.“

The Novus Ordo Missae, even when said with piety and respect for the liturgical rules …is impregnated with the spirit of Protestantism. It bears within it a poison harmful to the faith.”  ( Archbishop Lefebvre. An Open Letter to Confused Catholics, p. 29)

“One of the weaknesses of the postconciliar liturgical reform can doubtless be traced to the armchair strategy of academics, drawing up things on paper which, in fact, would presuppose years of organic growth. The most blatant example of this is the reform of the Calendar: those responsible simply did not realize how much the various annual feasts had influenced Christian people’s relation to time […] they ignored a fundamental law of religious life.” Joseph Cardinal Ratzinger, The Feast of Faith, 81-82 (published by Ignatius Press).”

“The liturgical reform, in its concrete realization, has distanced itself even more from its origin. The result has not been a reanimation, but devastation. In place of the liturgy, fruit of a continual development, they have placed a fabricated liturgy. They have deserted a vital process of growth and becoming in order to substitute a fabrication. They did not want to continue the development, the organic maturing of something living through the centuries, and they replaced it, in the manner of technical production, by a fabrication, a banal product of the moment.” (Ratzinger in Revue Theologisches, Vol. 20, Feb. 1990, pgs. 103-104)

A banal fabrication = A common lie

“[W]e have a liturgy which has degenerated so that it has become a show which, with momentary success for the group of liturgical fabricators, strives to render religion interesting in the wake of the frivolities of fashion and seductive moral maxims. Consequently, the trend is the increasingly marked retreat of those who do not look to the liturgy for a spiritual show-master but for the encounter with the living God in whose presence all the ‘doing’ becomes insignificant since only this encounter is able to guarantee us access to the true richness of being.” (Cardinal Ratzinger’s preface to the French translation of Reform of the Roman Liturgy by Monsignor Klaus Gamber, 1992).

“…the Novus Ordo represents, both as a whole and in its details, a striking departure from the Catholic theology of the Mass as it was formulated in Session XXIII of the Council of Trent.” (A Brief Critical Study of the Novus Ordo Missae, September 25, 1969)

“It is evident that the Novus Ordo has no intention of presenting the faith as taught by the Council of Trent, to which, nonetheless, the Catholic conscience is bound forever. With the promulgation of the Novus Ordo, the loyal Catholic is thus faced with a most tragic alternative.” ~ Cardinal Ottaviani to Pope Paul VI, “Ottaviani Intervention”.

“If the Church were not divine, this Council [the Second Vatican Council] would have buried Her.” -Cardinal Giuseppe Siri. He was an Italian Cardinal of the Catholic Church  who served as Archbishop of Genoa from 1946 to 1987, and was elevated to the cardinalate in 1953 by Pope Pius XII.

“They no longer transmit Our Lord Jesus Christ, but a sentimental, superficial and charismatic religiosity. [ … ] This new religion is not the Catholic religion. It is sterile and incapable of sanctifying society and the family.” ~ Archbishop Marcel Lefebvre, Founder of the SSPX.

“How could a successor of Peter have caused in so short a time more damage to the Church than the Revolution of 1789?… the deepest and most excessive in Her history… what no heresiarch has ever succeeded in doing?… Do we really have a pope or an intruder sitting on the Chair of Peter?” (Marcel Lefebvre, commenting on Paul VI’s reign in 1976)

For an in-depth analysis of substantial alterations of the Catholic Faith, readers may be interested in the “Summary of Fr. Hesse’s talk on the documents of Vatican II”. A major player at Vatican II, Archbishop Lefebvre also has made 12 official statements at the Council exposing the danger of its documents. He warned that the faithful would become confused, doubting the necessity of the Church, the sacraments, the conversion of non-Catholics, and the necessity of authority. An Open Letter To Confused Catholics is a popular study of the crisis in the Church written for all to understand.

The Changes Made by the Second Vatican Council are Condemned
by the Infallible, Perennial Magisterium of the Church

“Let everything that conflicts with ecclesiastical tradition and teaching, and that has been innovated and done contrary to the examples outlined by the saints and the venerable Fathers, or that shall hereafter at any time be done in such a fashion, be anathema.” Second Council of Nicea, (787 AD).

“Therefore, to safeguard Church order, we anathematize … next everyone who henceforth acts deceitfully and fraudulently and falsifies the word of truth and goes through the motions of having false vicars …” Pope Hadrian II, Fourth Council of Constantinople, February 28, 870.

“If anyone says that the received and approved rites of the Catholic Church customarily used in the solemn administration of the sacraments may be despised, or may be freely omitted by the ministers without sin, or may be changed into other new rites by any church pastor whomsoever, let him be anathema.”   Council of Trent, Sess. VII, Can. XIII. Pope Paul III, 3 March 1547 (D.S. 1613)

“If anyone says that the rite of the Roman Church, according to which a part of the canon and the words of consecration are pronounced in a low tone, is to be condemned; or that the mass ought to be celebrated in the vernacular tongue only; or that water ought not to be mixed with the wine that is to be offered in the chalice because it is contrary to the institution of Christ, let him be anathema.” Council of Trent, Canon 9 (September 17, 1562)

“Now, therefore, in order that all everywhere may adopt and observe what has been delivered to them by the Holy Roman Church, Mother and Mistress of the other churches, it shall be unlawful henceforth and forever throughout the Christian world to sing or to read Masses according to any formula other than this Missal published by Us… Accordingly, no one whosoever is permitted to infringe or rashly contravene this notice of Our permission, statute, ordinance, command, direction, grant, indult, declaration, will, decree, and prohibition. Should any venture to do so, let him understand that he will incur the wrath of Almighty God and of the blessed Apostles Peter and Paul.” Pope St. Pius V, Quo Primum Tempore, July 14, 1570.

“Now I order you to retain this creed for your nourishment throughout life and never to accept any alternative, not even if I myself were to change and say something contrary to what I am now teaching, not even if some angel of contradiction, changed into an angel of light, tried to lead you astray. For even if we, or an angel from heaven, should preach to you a gospel contrary to that which you have now received, let him be accursed in your sight.” ~ St Cyril of Jerusalem