What had Pope Pius XII’s reforms to do with Pope Paul VI’s New Mass? Not many Catholics are aware of the seamless link between them, but the answer is here provided in full detail between the covers of this illuminating book. Most traditionalists today are likely to react with shock and outrage that anyone should consider Pius XII – the “last traditional Pope” in their estimation – to have been in any way responsible for contributing to the eventual destruction of the liturgy. But all the evidence adduced in this study indicates that Pius XII helped strengthen the radical aims of the Liturgical Movement, and that this was just the beginning of the betrayal and abandonment of the Catholic liturgical heritage.

The first two chapters consider the slogan “active participation” of the laity in the liturgy. It is shown that this slogan has no properly authenticated origin in the teachings of Pope Pius X, as it is not mentioned in any of the Latin documents he issued before or during his Pontificate. Certain linguistic anomalies in the vernacular version of Pius X’s 1903 motu proprio are revealed as the source of decades of confusion about the distinction between the clergy and laity in the Church’s liturgy.

Chapters 3 and 4 deal with the Belgian monk, Dom Lambert Beauduin who first popularized the slogan “active participation”, and is generally regarded as the originator of the Liturgical Movement. Evidence gleaned from his works shows that he was driven by a spirit of egalitarianism to blur the distinction between the clergy and the laity, so that all would have an active share in the performance of the liturgy. All his proposals were incorporated into Vatican II’s Constitution on the Liturgy. The ill effects of the “Dialogue Mass” which he introduced are outlined.

Chapter 5 sketches the progressive legislation of Pope Pius XI against a background of increasing resistance to Pius X’s motu proprio, and shows how, in the domain of liturgy, the policy of Pope Pius XI towards recalcitrant bishops was one of tolerance. This is contrasted with his surprising intolerance towards members of the laity praying silently at Mass and his resolve to rid the Church of this traditional method of spiritual participation. It was the beginning of the end of papal protection for the faithful from the arbitrary power of bishops to impose their own agendas of “active participation” on them.

Chapters 6 and 7 give a detailed account of Pius XII’s efforts to deal with pressure from the Liturgical Movement, especially the German and French Episcopal Conferences, to wrest control of the liturgy from the Holy See. His response was to adopt a policy of appeasement and compromise between traditional and progressive forces which minimized papal authority and favoured the growth of what later became known as “collegiality” or the autonomy of national Episcopal Conferences.

Of special note is his appointment in 1946 of the Commission for the General Reform of the Liturgy consisting of a majority of “progressivists” under the direction of then Fr Annibale Bugnini, to whom he entrusted the 1956 Reform of Holy Week. And in 1947 he raised the profile of “active participation” by promoting it in Mediator Dei as a “liturgical apostolate” of the laity.

Chapters 8-18 give a comprehensive analysis of the destructive changes to the Holy Week ceremonies in 1956, together with a critique of the thinking behind the changes and a refutation of their necessity. These chapters demonstrate that the members of the papal Commission were effectively given the power to dictate the reforms on the basis of nothing more than their own prejudices, and that Pius XII allowed the inventions of the reformers to take precedence over the rights of the faithful to their own Tradition.

Chapter 19 deals with Pius XII’s reform of the Roman Calendar which eliminated more than half of the Church’s Vigils and almost all of the traditional Octaves. Particular attention is paid to the abolition of the baptismal rites of the Vigil of Pentecost which had been handed down unchanged from the earliest centuries of the Church.

Chapter 20 explains how the Octave of Pentecost, slated for abolition by the Pius XII’s Commission in 1950, survived the Calendar reform only because the reformers needed time to prepare for further upheavals in the Novus Ordo Calendar in which the Octave would be suppressed.

Chapter 21 shows how the Holy See, by official decree, started the process of the declericalization of the liturgy. This was apparent in the rubrics of the new Order of Holy Week (1956) and the Instruction on Sacred Music (1958) which made the clergy share with the congregation their privileged worship space, liturgical roles and even their responsibility for performing the liturgy. These two documents are shown to be foundational for the creation of the Novus Ordo, insofar as they gave the laity an integral role in the performance of the liturgy. It was a fateful concession to the reformers, from Beauduin to Vatican II, who contested the right of the clergy to sing or say Mass without the active participation of the people present.

Chapter 22 gives clear and convincing evidence that “active participation” was never anything more than a subterfuge to undermine the ministerial priesthood and vindicate Luther’s “common priesthood of all believers”. Even Pius XII, under pressure from the reformers to contradict his own previous teaching, adopted the Protestant principle that the vocal responses of the gathered community are essential for the integrity of the liturgy. It was a disguised attack on the sacramental priesthood. For it subtly suggests that Catholic worship is simply and solely a joint enterprise between the priest and the people in which the latter have an integral liturgical office to perform – a proposition condemned by the Council of Trent.

The book concludes with the observation that the creation of the New Mass of 1969 was dependent on a long concatenation of prior events that had been unfolding in historical continuity from the first stirrings of revolution in early years of the 20th century. It was evident even in those pre-Vatican II years that respect for Tradition was already declining because it was becoming less and less supported by papal authority. At the very top of the ecclesiastical tree, the Congregation of Rites degenerated from being the Church’s front line of defence against attempts to undermine the liturgy into a fifth column to facilitate the desires of the reformers. The weapon of choice to further their aims to Protestantize the liturgy was the “active participation” of the laity.

The book can be read from beginning to end as an in-depth study of the progressive decline of the traditional liturgy well before Vatican II. But its main utility is that it can be dipped into at any point as a well-documented source of reference for a particular change in the Roman Rite orchestrated by the Liturgical Revolution.

It comes complete with an Index and a full Bibliography.

Born of Revolution: A Misconceived Liturgical Movement
TABLE OF CONTENTS

Dr Carol Byrne gained a B.A. and M.A. from University College Dublin and a Ph.D. from the University of Durham (U.K.). After raising a family, she was for a time deputy chair of the Latin Mass Society of England and Wales and formerly assistant editor of the magazine for the SSPX in the District of Great Britain. She has produced over 100 articles for the website Tradition in Action. Her books include Simplicissimus: an entirely new approach to learning the Latin of the Traditional Roman Missal (still used by the Latin Mass Society as a teaching aid for priests and laity with New Edition revised by current chair Dr. Joseph Shaw); The Catholic Worker Movement: A Critical Analysis, Authorhouse 2010; and Born of Revolution: A Misguided Liturgical Movement, Holyrood Press, 2020. 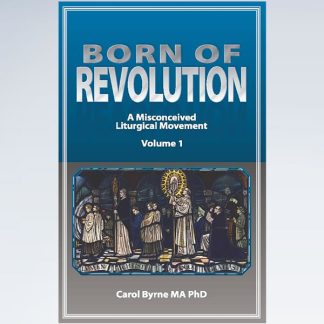 You're viewing: “Born of Revolution: A Misconceived Liturgical Movement” by Dr. Carol Byrne (PDF File) US$ 10.00
Add to cart