The Destruction of the Roman Rite

Don Pietro Leone is the author of this most useful summary of the history of the destruction of the Roman rite and the substitution of a modern rite called the Novus Ordo (new order) in its place. This book is an excellent addition to your parish library.

Send Inquiry for The Destruction of the Roman Rite

Don Pietro Leone is the author of this most useful summary of the history of the destruction of the Roman Rite and the substitution of a modern rite called the Novus Ordo (new order) in its place. In his General Audience of November 9, 1969, Pope Paul VI had this to say (among many other things) about substitution of the new rite for the Roman rite of all times: “This change has something astonishing about it, something extraordinary. This is because the Mass is regarded as the traditional and untouchable expression of our religious worship and the authenticity of our faith.”

No truer words were ever spoken by a pontiff, except perhaps by the high priest who once said: “You know nothing. Neither do you consider that it is expedient for you that one man should die for the sins of the people and that the whole nation perish not.”

— Some, upon contemplating these extraordinary changes, go so far as to think that the attempts of the Church’s enemies to eradicate once and for all “Popish superstition” from the world have made significant progress towards their goal when the Pope himself allowed the introduction of, in his own words, “a new rite” into the heart of the Church.

— Others seek to understand God’s will in these matters and consider that these changes and the resulting chaos in the life of the Church might be among those vague “chastisements” mentioned by Our Lady at Fatima.

— Still other observers of the Church in the latter half of the 20th Century and into the third millennium believe that the new mass is a great development of human progress and is the harbinger of a new “springtime” in the life of the Mystical Body, while yet others, many of the lay-faithful, struggle to maintain their faith and to live the life of faith somewhat passively in a spirit of docility in the face of the radical changes in liturgy and the life of the Church.

— Countless others have just dropped out of the daily life of the Church altogether.

There is no question that the new rite has changed the Church. This little book seeks to serve as a scholarly and objective summation of the changes and their effects. The substance of the work is taken largely from the mouths of those who were responsible for promoting and producing the changes as well as from several lengthy and scholarly books published by those who oppose them.

The Destruction of the Roman Rite
Table of Contents

Preface
Historical Introduction
I: Catholicism and Protestantism
A. In Official Church Documents
1. The Old Rite
2. The New Rite
B. In the Rites Themselves
1. The Offertory
2. The Canon
i. The Eucharistic Prayers
ii. Silence
iii. The Formula of Consecration
3. The Real Presence
4. The Sacramental Priesthood
5. The Ends of the Mass
6. Latin
7. The Orientation of the Celebrant
8. Altar and Table
9. Intelligibility and Participation
10. The Church
C. Public Testimonies
1. Catholic Testimonies
2. Protestant Testimonies
D. An Ecumenical Motivation
II: The Cult of God and the Cult of Man
A. General Comparison
1. The Orientation of the Celebrant
2. Gravity
3. The Sacred
4. The Rubrics
5. A Perfect Work
6. Contemplation and Devotion
B. Comparison of the Propers
1. The Collects
2. The Gospels and Epistles
i. The Gospels
ii. The Epistles
C. Mistranslations
D. Motivation: Rapprochement with the World
Conclusion
Epilogue 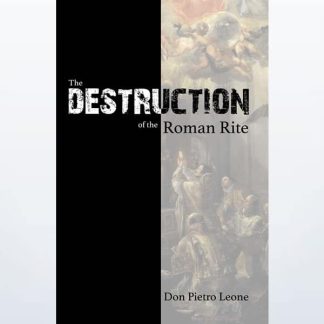 You're viewing: The Destruction of the Roman Rite US$ 20.00
Add to cart