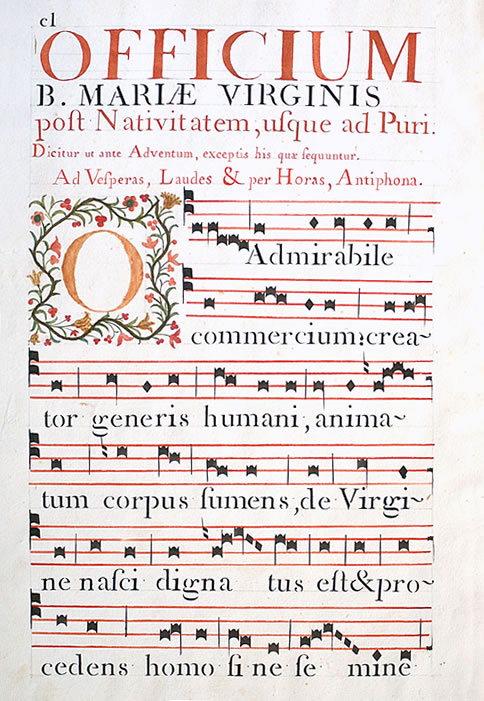 “They all attend Mass every day and say many Paternosters (rosaries) in public, … and whoever is at all able to read carries with him the Office of Our Lady; and they recite it in church with some companion in a low voice, verse by verse, after the manner of churchmen.” ~ From the Report of the Venetian Ambassador upon visiting England in 1496.

The Little Office is one of the official prayers of the Church and the most venerable of all devotions in honour of Mary. This is why so many religious societies have adopted it as their meed of praise to the Queen of Heaven, and as a link uniting them with the great voice of Catholic liturgy rising up day and night before God.  The Sovereign Pontiffs have encouraged the recitation of the Little Office by granting it many indulgences, followed throughout in the authorized edition of the Raccolta.

“Among its many practices of piety, the eager devotion of the Christian faithful toward the holy Mother of God has treasured for centuries an exercise by which the Virgin Mother of God is especially honored, and which is called the Little Office of the Blessed Virgin Mary. This devotion has gained a greater following in recent times since the daily recitation of this Office is prescribed by the constitutions of many Congregations, both of Lay Brothers and of Sisters—a regulation meriting the highest praise.” Pope Pius XII

Would you like to learn what each of the hours symbolize, where to find your place in the book, what time to pray, and how to enter more deeply into the Word of God in the Psalms?  There are several resources available to begin with. Virgo Sacrata offers two versions of The Little Office of The Blessed Virgin Mary, both in English and Latin.

In “The Little Office of the Blessed Virgin Mary”, the traditional Latin names are used for the hours:

As the Psalmist sings, “Seven times a day I praise you, O Lord !”

Each Canonical Hour Consists of: