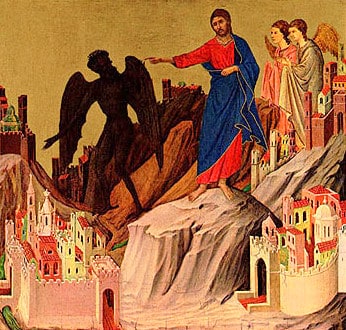 The following text comes from the first Chapter of the book entitled: “The Spiritual Combat” by Dom Lorenzo Scupoli. Lorenzo Scupoli (c.1530-1610) was born in Otranto, Italy. He was admitted to the religious order of the Theatine Regular Clerks of St. Cajetan in 1571, and by his desire was called Lorenzo of Otranto. He later went to Milan, under the provost St. Andrew Avellino. After many years of active duties he retired into strict seclusion and wrote The Spiritual Combat.  It is said that he met St. Francis de Sales in Padua between 1589 and 1591 and gave him a copy of The Spiritual Combat.  The first edition of The Spiritual Combat bearing Scupoli’s name was published in the year of his death 1610. This work was published for the greater Glory of Jesus Christ through His most Holy Mother Mary and for the sanctification of the militant Church and her members.

THE FOUR THINGS NECESSARY FOR THIS COMBAT

CHRISTIAN SOUL! If you seek to reach the loftiest peak of perfection, and to unite yourself so intimately with God that you become one with spirit with Him, you must first know the true nature and perfection of spirituality in order to succeed in the most sublime undertaking that can be experienced or imagined.

Some, who judge by appearances, make it consist in penances, in hair shirts, austerities of the flesh, vigils, fasting, and similar bodily mortifications. Others fancy themselves extremely virtuous when they indulge in long periods of vocal prayers, hear several Masses, spend many hours in church . . . Others, and this does not exclude some of the religious who have consecrated themselves to God, think that perfection consists in perfect attendance in choir, in observing silence and in a strict observance of their rule. Consequently, different people place perfection in different practices. It is certain that they all equally deceive themselves.

Since exterior works are nothing more than dispositions for achieving true piety, or the effects of real piety, it cannot be said that Christian perfection and true piety consist in them. They are, without doubt, powerful means for becoming truly perfect and truly holy. When used with discretion they are of unique value in supporting our nature which is always indifferent to good and inclined to evil; in repelling the attacks and escaping the snares of our common enemy; in obtaining from the Father of Mercies those helps that are so necessary for the faithful, and especially for beginners. They are, moreover, precious fruits of the consummate virtue achieved in truly holy persons. Such men chastise their bodies either in punishment for past offenses or for greater humiliation and subjection to their Creator. They seek solitude and observe silence that, withdrawn from the world, they may preserve themselves free from the least stain of sin, and speak only with Heaven and Angels. Their time is spent in works of piety and in the service of God. They pray and meditate on the life and Passion of our Redeemer, not through curiosity, nor for the sake of some sensible pleasure arising from this, but from a desire of knowing better, on one hand, the grandeur of the Divine Goodness, and on the other hand, the depth of their own ingratitude. They do this in order to increase their love of God and detestation of self, to follow their Lord in shouldering His Cross, and in renouncing their own will. They receive the Sacraments for no other reason than the honor of God, a closer union with Him and greater security from the power of the devil.

The situation is much different with those who ignorantly place their devotion in external acts, which frequently are the cause of their own downfall, and are of far deeper consequence than open crime. In themselves, they are not evil, but only when wrongly applied. They are so attached to these acts that they utterly neglect to watch the inner movements of their hearts; but giving them free rein, they leave them prey to their own corruption and to the tricks of the devil. It is then that this destroyer, seeing them go astray, not only encourages them to go on their way, but fills their imagination with empty ideas, making them believe that they already taste the joys of Paradise, the delights of Angels, that they see God face to face . . .

A very little reflection on their conduct discloses their error and the great distance between them and that perfection of which we are now in search. In every circumstance they love to be shown preference to others. They know no guide but their own private judgment, no rule but their own will. They are blind in their own affairs, ferret-eyed in regard to those of the neighbors, always ready to find fault. Touch the empty reputation they think they possess, and of which they are extremely jealous. order them to stop some of the devotions to which they are accustomed. Their amazement and vexation can hardly be expressed.

If God Himself, in order to open their eyes and to show them the true path of perfection, should send them crosses, sickness, or severe persecutions, the surest trials of His servant’s fidelity, which never happen unless by his plan and permission, then the degenerate condition of their hearts is laid bare through their own extravagant pride. In all the events of this life, whether happy or not, they know nothing of a proper conformity to the Will of God. They do not know how to yield to His almighty power, to submit to His judgments which are as just as they are secret and impenetrable. They do not know how to imitate Christ Crucified, as He humbled Himself before all men; nor do they know how to love their enemies as the instruments used by God’s goodness to train them to self-denial and to help not only in their future salvation, but in greater sanctification of their daily life.

This is the very reason why they are in imminent danger of being lost. With eyes blinded by self-love, they examine themselves and their actions which are not otherwise blameworthy, and they are inflated with vanity. They conclude that they are far advanced towards God and they readily look down on their neighbor: in fact, their pride often will so increase their blindness, that their conversion cannot be effected without a miracle of grace.

Experience proves that acknowledged sinners are reformed with less difficulty than those who wilfully hide themselves under the cloak of a false virtue. From this you can easily understand that the spiritual life does not consist in the practice enumerated above, if they are considered only in their outward appearance.

It actually consists in knowing the infinite greatness and goodness of God, together with a true sense of our weakness and tendency to evil, in loving God and hating ourselves, in humbling ourselves not only before Him, but for His sake, before all men, in renouncing entirely our own will in order to follow His. It consists, finally, in doing all of this solely for the glory of His Holy Name, for only one purpose—to please Him, for only one motive—that He should be loved and served by all His creatures.

These are the dictates of that law of love which the Holy Ghost has written on the hearts of the faithful. This is why we must practice that self-denial so earnestly recommended by our Savior in the Gospel. This it is that renders His yoke so sweet, His burden so light . . .

Since, therefore, you seek the highest degree of perfection, you must wage continual warfare against yourself and employ your entire strength in demolishing each vicious inclination, however trivial. Consequently, in preparing for the combat you must summon up all your resolution and courage. No one shall be rewarded with a crown who has not fought courageously.

But remember that as no war can be carried on with greater fierceness, the forces, no other than ourselves, being equal on both sides, so the victory when gained is most pleasing to God and most glorious to the conqueror. For whoever has the courage to conquer his passions, to subdue his appetites, and repulse even the least motions of his own will, performs an action more meritorious in the sight of God than if, without this, he should tear his flesh with the sharpest disciplines, fast with greater austerity than the ancient Fathers of the Desert, or convert multitudes of sinners.

It is true, considering things in themselves, that the conversion of a soul is, without doubt, infinitely more acceptable to the Divine Majesty than the mortification of a disorderly affection. Yet, every person, in his own particular sphere, should begin with what is immediately required of him. Now what God expects of us, above all else, is a serious application to conquering our passions; and this is more properly the accomplishment of our duty than if, with uncontrolled appetite, we should do Him a greater service.

Now that you know what Christian perfection is and that, in order to attain it, you must resolve on a perpetual warfare with yourself, begin by providing yourself with four weapons without which it is impossible to gain the victory in this spiritual combat: distrust of one’s self, confidence in God, proper use of the faculties of body and mind, and the duty of prayer. With the help of God’s grace, these will be treated concisely in the following chapters.