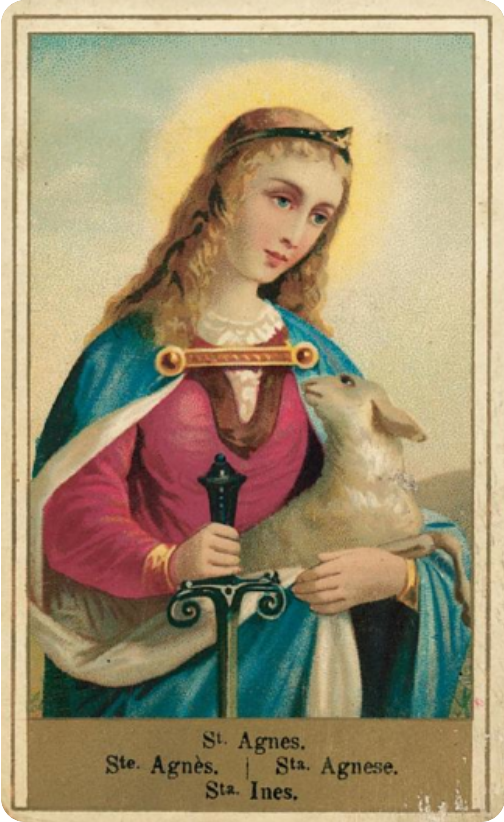 O glorious Agnes who, though weak, was chosen by God to make His own might manifest in your martyrdom, together with the Peter and Paul and the other Roman martyrs and confessors, intercede now before the throne of our Christ the High Priest in heaven and beg a return of orthodoxy, sanity and sanctity to the Church especially in Rome and in particular the Roman Curia at every level.  O holy Agnes, who bravely suffered torments, ask Mary, the Queen of the Clergy, to protect and aid all priests, so that they will all stand up boldly and teach the truth about the Sacrament of Matrimony, the integrity of the Sacrament of Holy Orders, the truth about the Most Holy Eucharist, and beg for the restoration and renewal of our sacred liturgical worship of the Lamb who was slain.  We entrust this to you, blessed Saint Agnes, with all our confidence.  Amen.

The holy Virgin Martyr Agnes was born in Rome during the third century. Her parents were Christians, and they raised her in the Christian Faith. From her youth she devoted herself to God, and dedicated herself to a life of virginity, refusing all other suitors.

When she refused to enter into marriage with the son of a city official, one of his associates revealed to him that Agnes was a Christian. The wicked official decided to shame the holy virgin, and ordered that she be stripped and sent to a brothel for disdaining the pagan gods. But the Lord would not permit the saint to suffer. As soon as she was disrobed, long thick hair grew from her head covering her body. An angel was also appointed to guard her. Standing at the door of the brothel, the angel shone with a heavenly light which blinded anyone who came near the holy virgin.

The son of the official also sought to defile the virgin, but fell down dead before he could touch her. Through the fervent prayer of St. Agnes, he was restored to life. Before his father and many other people he proclaimed, “There is one God in the heavens and on earth: the Christian God, and the other gods are but dust and ashes!” After seeing this miracle, 160 men believed in God and were baptized, and then suffered martyrdom.

At the demand of the pagan priests, St. Agnes was given over to torture. They tried to burn her as a witch, but the saint remained unharmed in the fire, praying to God. After this, they killed her by stabbing her in the throat. Through her death at the age of thirteen, St. Agnes inherited eternal life. The holy virgin martyr was buried by her parents in a field they owned outside of Rome.

Many miracles occurred at the grave of St. Agnes. Her holy and grace-filled relics rest in the church built in her honor, along the Via Nomentana.

Saint Agnes of Rome has two feast days in the traditional Roman calendar: on January 21st and second feast on January 28.