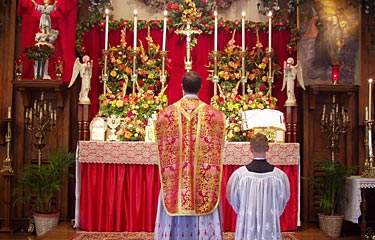 – An Antidote to Traditionis Custodes

Traditional Holy Mass unites us to the Saints and Martyrs of the past. Since the times of the catacombs up until the most recent persecutions, wherever a priest celebrates the Holy Sacrifice, even in an attic or a cellar, in the woods or in a barn, or even in a van, he is mystically in communion with that host of heroic witnesses of the Faith, and the gaze of the Most Holy Trinity rests on that improvised altar; before it all the angelic hosts genuflect adoringly; all of the souls in purgatory gaze toward it. In this too, especially in this, each of us understands how the Tradition creates an indissoluble link between the centuries, not only in the jealous custody of that treasure, but also in facing the trials that it entails, even unto death. In the presence of this thought, the arrogance of the present tyrant, with his insane decrees, ought to strengthen us in fidelity to Christ and make us feel that we are an integral part of the Church of all times, because we cannot win the palm of victory if we are not ready to fight the bonum certamen. — Archbishop Carlo Maria Viganò.

In the introduction chapter of Saint Andrew Missal (1945 Edition), there is an interesting and instructional passage written by Fr. Lasance: “Yes, strip our altars; leave us only the Corn and Vine, and a rock for our altar, and we will worship with posture as lowly and hearts as loving as in the grandest cathedral. Let persecution rise; let us be driven from our churches; we will say Mass in the woods and caverns, as the early Christians did. We know that God is everywhere. We know Nature is His temple, wherein pure hearts can find Him and adore Him; but we know that it is in the Holy Mass alone that He offers Himself to His Father as the Lamb that was slain. How can we forego that sweet and solemn action? How can we deprive ourselves of that heavenly consolations? The sparrow hath found her a house and the turtle a nest where she may lay her young, even thy altars, O Lord of hosts, my King, and my God! Man’s heart has found a home and resting-place in this vale of tears. To us, the altar is the vestibule of heaven, and the host its open door.”

If your church has been closed due to Traditionis Custodes, turn your homes into Traditional Latin Mass Houses of the Lord. Our Lord will deal with the hirelings and all sacrilegious cohorts, putting them back in the place where bishops pave the floors of hell. “The floor of Hell is paved with the skulls of bishops” ~ St. Athanasius.

“The devil has always managed to get rid of the Mass by means of the heretics, making them the precursors of the Antichrist who above all else, will manage to abolish, and in fact will succeed in abolishing, as punishment for the sins of men, the Holy Sacrifice of the altar, precisely as Daniel has predicted.” ~ St Alphonsus Liguori, “La Messa a l’Officio Strapazzati” in Opere Asctiche.

It is time to go back to ‘catacombs’ and let traditional priests worship from there. And if you do not have any priest in your area, gather in numbers, follow the Mass according to a Traditional Missal, make a spiritual communion. In due time, Holy Ghost will gather the faithful together in larger numbers to worship God in churches built by our forefathers.

“May God console you!… What also saddens you is that the others have occupied the churches by violence while you, meanwhile, are outside. It is a fact, they have the premises: but you have the apostolic faith. They can occupy our churches, but they are outside the true Catholic faith. Think: what is more important, the place or the Faith? True faith is obvious. In this struggle, who lost, who won, the one who keeps the place or the one who keeps the faith? The place, it is true, is good when the apostolic faith is preached there; it is holy if everything happens there holy… It is you who are happy, you who remain in the Church by your faith, you who hold firmly to the foundations of the faith which has come down to you from the Holy Apostolic Tradition and if , on many occasions, an execrable jealousy wanted to shake her, she did not succeed. It is those who have broken away from it in the present crisis.

No one, ever, will prevail over our faith, beloved brethren. And we believe that God will give our churches back to us someday. Thus, the more they persist in occupying places of worship, the more they separate themselves from the Church. They claim to represent the Church; in reality, they expel themselves from it and go astray. Catholics faithful to God in Holy Tradition, even if they are reduced to a handful, these are the true Church of Jesus Christ.»

“The apostasy of the city of Rome from the vicar of Christ and its destruction by Antichrist may be thoughts so new to many Catholics, that I think it well to recite the text of theologians of greatest repute. First Malvenda, who writes expressly on the subject, states as the opinion of Ribera, Gaspar Melus, Biegas, Suarrez, Bellarmine and Bosius that Rome shall apostatise from the faith, drive away the Vicar of Christ and return to its ancient paganism. …Then the Church shall be scattered, driven into the wilderness, and shall be for a time, as it was in the beginning, invisible hidden in catacombs, in dens, in mountains, in lurking places; for a time it shall be swept, as it were from the face of the earth. Such is the universal testimony of the Fathers of the early Church.” ~ Henry Edward Cardinal Manning, The Present Crisis of the Holy See, 1861, London: Burns and Lambert, pp. 88-90)

So stand fast, brethren. Follow the Lamb wherever He goes. Purify your hearts, so you can hear His voice. And remember, “Neither death, nor life, nor angels, nor principalities, nor powers, nor things present, nor things to come, Nor height, nor depth, nor any other creature, shall be able to separate us from the love of God, which is in Christ Jesus our Lord (Rom. 8:38-39).