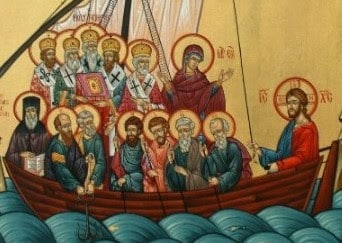 These words of the great apostle of the Gentiles show clearly that it is not a matter of indifference what faith or religion we profess. We often hear the expression from so-called enlightened men: “It is all the same to what religion we belong, we can be saved in any if we only believe in ‘God and live uprightly.” But this assertion is impious!

Consider, my dear Christian, there is but one God and this one God has sent only one Redeemer, and this one Redeemer has preached but one Doctrine and has established but one Church. Had God wished that there should be more than one Church, then Christ would have founded others. Jesus, knowing the will of His Father, the eternal God, founded only one Church—the Catholic Church.

The Changes Made by the Conciliar Church are Condemned by the Infallible, Perennial Magisterium of the Church

“Let everything that conflicts with ecclesiastical tradition and teaching, and that has been innovated and done contrary to the examples outlined by the saints and the venerable Fathers, or that shall hereafter at any time be done in such a fashion, be anathema.” Second Council of Nicea, (787 AD).

“Therefore, to safeguard Church order, we anathematize … next everyone who henceforth acts deceitfully and fraudulently and falsifies the word of truth and goes through the motions of having false vicars …” Pope Hadrian II, Fourth Council of Constantinople, February 28, 870.

“If anyone says that the received and approved rites of the Catholic Church customarily used in the solemn administration of the sacraments may be despised, or may be freely omitted by the ministers without sin, or may be changed into other new rites by any church pastor whomsoever, let him be anathema.”   Council of Trent, Sess. VII, Can. XIII. Pope Paul III, 3 March 1547 (D.S. 1613)

“If anyone says that the rite of the Roman Church, according to which a part of the canon and the words of consecration are pronounced in a low tone, is to be condemned; or that the mass ought to be celebrated in the vernacular tongue only; or that water ought not to be mixed with the wine that is to be offered in the chalice because it is contrary to the institution of Christ, let him be anathema.” Council of Trent, Canon 9 (September 17, 1562)

“Now, therefore, in order that all everywhere may adopt and observe what has been delivered to them by the Holy Roman Church, Mother and Mistress of the other churches, it shall be unlawful henceforth and forever throughout the Christian world to sing or to read Masses according to any formula other than this Missal published by Us… Accordingly, no one whosoever is permitted to infringe or rashly contravene this notice of Our permission, statute, ordinance, command, direction, grant, indult, declaration, will, decree, and prohibition. Should any venture to do so, let him understand that he will incur the wrath of Almighty God and of the blessed Apostles Peter and Paul.” Pope St. Pius V, Quo Primum Tempore, July 14, 1570.

“Now I order you to retain this creed for your nourishment throughout life and never to accept any alternative, not even if I myself were to change and say something contrary to what I am now teaching, not even if some angel of contradiction, changed into an angel of light, tried to lead you astray. For even if we, or an angel from heaven, should preach to you a gospel contrary to that which you have now received, let him be accursed in your sight.” ~ St Cyril of Jerusalem