A Critical Study of the New Order of Mass …or what has become known as the “Ottaviani Intervention.” Softcover, 48 pages.

Send Inquiry for The Ottaviani Intervention

“It is evident that the Novus Ordo has no intention of presenting the faith as taught by the Council of Trent, to which, nonetheless, the Catholic conscience is bound forever. With the promulgation of the Novus Ordo, the loyal Catholic is thus faced with a most tragic alternative.”

This statement, made with absolute and definitive clarity, from Section VI of the Ottaviani Intervention, was made in response to what might be considered one of the most critical moments in the history of the Catholic Church since the original Pentecost Sunday, the traditional worship of the Roman Church was about to be replaced.

The issue of the ongoing litugical revolution in the Catholic Church became critical on April 28, 1969, when Paul VI announced the Novus Ordo Missae. It was the last chance for action within the traditional channels of ecclesiastical authority. Somehow the pope had to be dissuaded from implementing this substitute for the traditional Catholic Mass of the Roman Rite. This attempt, ultimately unsuccessful, was done in A Critical Study of the New Order of Mass …or what has become known as the “Ottaviani Intervention”. 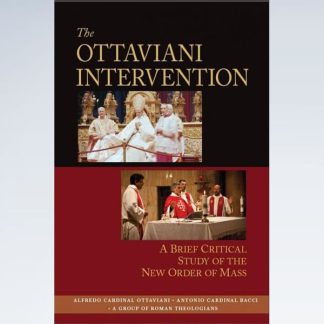 You're viewing: The Ottaviani Intervention CAD$ 20.00
Add to cart