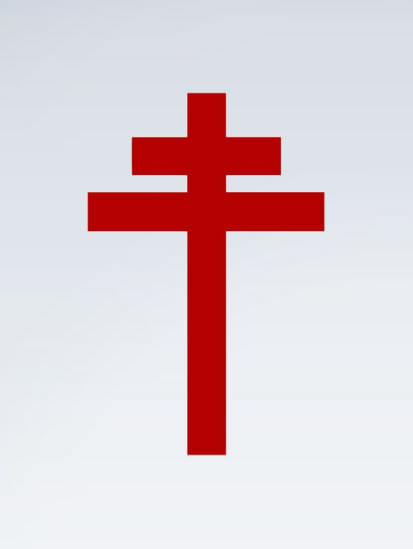 The history of the cross of Lorraine is summarized by Michel Pastoureau in his book “Les emblèmes de la France”.

The patriarchal, double cross-pieced cross was one of the pre-heraldical emblems of the Kingdom of Hungary. Used on Hungarian coins at the end of the 12th century, it was later included in the Royal arms. At the same time in Anjou (west of France), a reliquary of the True Cross was an object of specific devotion. This reliquary had the shape of the double cross-pieced cross. It was most probably of Byzantine origin and was kept in the castle of the counts of Anjou. In the 12th-13th centuries, the double cross-pieced cross was considered as the image of the True Cross all over the eastern Christian countries. The upper cross-piece, usually shorter than the lower one, recalled the titulus, on which the writing I.N.R.I. (Jesus Nazareus Rex Iudeorum) had been written. This representation was less common in the western Christian countries.

In the 14th-15th centuries, the Dukes of the second house of Anjou made a specific cult of the double cross-pieced cross. Coins and seals, as well as artworks such as the Apocalypse Tapestry (c. 1380), were decorated with the cross, which was then called “Cross of Anjou” or, less frequently, “Cross of Jerusalem”. René of Anjou, Duke of Lorraine in 1431, Introduced in the east of France by René of Anjou, Duke of Lorraine in 1431, the cross was eventually adopted as the emblem of the Duchy of Lorraine and of all the Lorrains.

In 1477, during the siege of Nancy, Duke René II of Vaudémont, used the cross as a rallying symbol. Following the lift of the siege, the cross became extremely popular in Lorraine. In the 16th century, heraldists dropped the name “Cross of Anjou” and coined the current name “Cross of Lorraine” (Croix de Lorraine).

In the 19th century, the Les emblèmes de la France was included among the iconographical attributes of Joan of Arc, who was from Lorraine. After the incorporation of a great part of Lorraine to Germany following the 1870 war, the Cross of Lorraine became a symbol of memory and resistance.

The hill of Sion-Vaudémont, located 20 km south of Nancy, is a stronghold of Lorrain patriotism. The hill has the shape of a horseshoe and is therefore considered as a good omen. In the Middle-Ages, the hill was a place of prayer for the Crusaders, and received the name of Zion (in French, Sion). It is said that René de Vaudémont defeated Charles the Bald under the banner of Notre-Dame of Sion.

On 10 September 1873, the last Prussian soldiers left the part of Lorraine which would remain French. A broken Cross of Lorraine was placed in the basilica of Sion, with the writing in Lorraine patois “Ce n’est pas pour toujours” – (This is not forever). On 24 June 1920, a golden palm was added to hide the break of the cross, and a new motto was added, “Ce n’était pas pour toujours” – (This was not forever). In 1946, the end of the Second World War was celebrated by a new cross with the motto  “Maintenant c’est pour toujours” – (Now it is forever). On 9 September 1973, the Peace Day involved 10,000 pilgrims, including former German war prisoners. A marble scroll charged with the word Réconciliation was placed on the altar beside the other symbols.

The hill of Sion is better known as the “inspired hill” (la colline inspirée). This nickname was coined in 1913 by the writer and politician Maurice Barrès (1862-1923), born in Charmes, c. 25 km from Vaudémont. Barrès was the leader of the nationalist movement in France before the First World War. He attempted to reconciliate romantism and a kind of patriotic regionalism, and was, therefore, a warm partisan of the First World War and the revenge over Germany. His work is now mostly forgotten, but he dramatically influenced the next generation of French writers, including those who did not share his political views. Mauriac, Bernanos and even the Communist Aragon have acknowledged his influence, whereas Proust, his contemporary, expressed a strong admiration for his work in spite of being in total disagreement with Barrès’ political views.

On 29 January 1941, de Gaulle created the Order of Liberation. The badge of the Order is a shield bearing a sword charged with a small Cross of Lorraine. The ribbon is bicolor, black and green for mourning and hope, respectively. The motto (Patriam servando victoriam tulit) proclaims the fatherland service and announces the victory.

The Cross of Lorraine was officially prescribed as the emblem of the Free France (later the Fighting France) by a Regulation of 5 June 1941. At the end of the war, it was often associated with the V of Victory.

“So then, submit yourselves to God. Resist the Devil, and he will run away from you.” ~ James 4:7