The St. Benedict Cross contains St. Benedict Crucifix Medal on the front and back side of the cross. The medal is intended to be a constant, silent prayer asking for Christ’s guidance and aversion from the devil.

The St. Benedict Cross contains St. Benedict Crucifix Medal on the front and back side of the cross. The medal is intended to be a constant, silent prayer asking for Christ’s guidance and aversion from the devil.  It is a reminder of Jesus calling to take up our Cross and follow him on the path of love, compassion and unity.

“The Cross, is wood which lifts us up and makes us great … The Cross uprooted us from the depths of evil and elevated us to the summit of virtue”
St John Chrysostom

THE POWER AND EFFECTS OF THE SAINT BENEDICT WALL CRUCIFIX 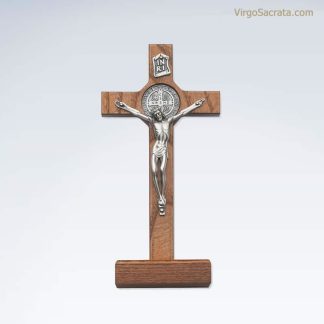