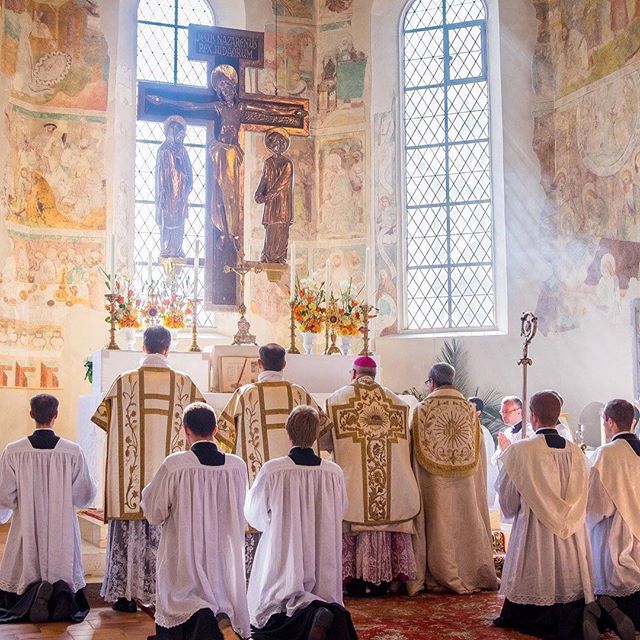 Our Holy Church has always recognized the value of rites and ceremonial observances, not only for increasing the solemnity of her services but for arousing a spirit of devotion in those who minister at them and those who attend them.

And because a religious practice happened to be of Jewish origin or had been used in the rites of paganism, the Church does not therefore look upon it as something to be necessarily condemned or forbidden. She has taken some of the details of her liturgy not only from the ceremonial law of Moses, but even from pagan worship. On account of this, some of her more biased critics have asserted that “Romanism is nothing but Christianized paganism” –an accusation which reveals the inbred prejudices of those who can find no word of praise for anything that is taught or done by the Church of Rome.

Expressing Homage to the Deity

The Catholic Church knows that in every form of worship, in every effort of man to do homage to his concept of the deity, there are many practices that are commendable, inasmuch as they are a good expression of religious sentiment, and she has adapted the best of these to the requirements of her ritual. Thus, for instance, we find in Catholic worship the use of holy water, which was not only a Jewish but a pagan practice; the wearing of medals and amulets, common to all the religions of antiquity; and the use of incense at religious functions. It is concerning the last of these that we shall treat in this section.

The Incense and the Censer. What is incense?

It is a granulated aromatic resin, obtained from certain trees in Eastern and tropical countries, especially from those of the terebinth family. When sprinkled upon a glowing coal in the censer, it burns freely and emits an abundant white smoke of very fragrant odor. Various spices are sometimes mixed with the resin to increase its fragrance.

The censer is a vessel in the form of a bowl, provided with a cover, and suspended from chains, so that it may be swung to and fro for the better diffusion of the sweet odor. When a person or thing is to be incensed, the censer, being held in the right hand, is elevated to the height of the eyes, and swung forward once or oftener, according to the requirements of the rubrics.

The incense is kept in a vessel known as a boat from its peculiar shape, and is transferred to the censer by means of a small spoon.

First of all, we find in the Scriptures many references to its use in Jewish worship. In the sanctuary of the Tabernacle of God an altar was provided for the burning of incense, morning and night. It is thus described in the ritual which Moses gave to the Israelites, in the book of Exodus:

“Take unto thee spices . . . o sweet savor and the clearest frankincense . . . and when thou hast beaten all into very small powder, thou shalt set of it before the Tabernacle. Most holy shall this incense be unto you.”

It is also mentioned in the Psalms and by the prophets Isaias, Jeremias and Malachias, as well as in the gospel account of the vision of Zacharias, the aged priest, who was “offering incense in the temple of the Lord” when he received the promise of God that a son would be given to him. And of course we know that the Magi brought incense as one of their gifts to the infant Saviour.

In the ceremonies of pagan creeds incense had an important part. Its use is mentioned by Ovid and Virgil as a feature of the rites of Roman worship, being probably adopted from the Eastern nations with whom the Romans had come into contact. Among these, especially the Assyrians and Egyptians, it has been known almost from the dawn of history. The carvings of the tombs and temples of Egypt represent kings offering homage to the gods by burning incense in censers much like those used in our Catholic churches at the present day.

When did the Church begin to use it? We do not know exactly. There is no evidence that it was employed in Christian worship until about the fifth century, although when we consider to what an extent it was used in the rites of Judaism and how many times it is mentioned in the Scriptures, it seems probable that incensing as a part of the Catholic ceremonial, goes back to an earlier day. It came into use in the East before it was adopted by the Western Church, for the Orientals in the early centuries had a much more elaborate ritual than the Roman Church had. Incense was used at first at the gospel of the Mass only, but in succeeding centuries other incensations were introduced, not only at the Mass but at other services. At the present day the use of incense forms a rather prominent feature of the more solemn services of our Church. In our Latin rite it is not employed at low Mass, but in solemn Mass incensings take place at several parts of the celebration. A brief description of these ceremonies will show how clearly the incense symbolizes the prayers of the faithful ascending before the throne of God.

Incense is used in solemn Mass at the introit, the gospel, the offertory and the elevation; but in the Mass for the dead the first two incensings are omitted. At each of the times when the censer is to be used, fresh incense is put into it and is blessed, usually by the celebrant. At the introit and the gospel the blessing is simple: “Mayest thou be blessed by Him in Whose honor thou shalt be consumed. Amen.

At the offertory a more elaborate ceremonial is carried out. The blessing is given thus: “May the Lord, through the intercession of blessed Michael the Archangel standing at the right hand of the altar of incense, and of all His elect, deign to bless this incense and to accept it as an odor of sweetness. Through Christ our Lord. Amen.”

The celebrant then incenses the bread and wine which are upon the altar, with the words: “May this incense, blessed by Thee, ascend to Thee, O Lord; and may Thy mercy descend upon us.” He next incenses the crucifix and the altar, saying, in the words of the 140th Psalm: “Let my prayer, O Lord, be directed as incense in Thy sight; the raising up of my hands as an evening sacrifice. Set a watch, O Lord, on my mouth and a door around my lips. Incline not my heart to evil words to make excuses in sins.”

And finally: “May the Lord kindle in us the fire of His love, and the flame of everlasting charity. Amen.” The censer is also lifted as a mark of respect before the celebrant, ministers and assisting clergy at a Solemn Mass.

Incense is used also in many other public services of the Church in processions, blessings and other functions, and in the absolution or obsequies for the dead. Not only persons but inanimate things are thus honored things which are in themselves sacred, such as relics; things which have been previously blessed, such as crucifixes, altars and the book of the gospels; and things to which a blessing is being given, such as bodies of the dead and sepulchres.

On Holy Saturday, when the paschal candle is solemnly blessed in each parish church, five grains of incense are inserted into it, each being encased usually in a piece of wax resembling a nail.’ These are fixed in the wax of the candle in the form of a cross.

When an altar or altar stone is consecrated, grains of incense are burned upon it, and other grains are put into the sepulchre, that is, the cavity containing the relics, thus symbolizing the prayers and intercession which will be offered in Heaven by the saint whose sacred relics are enclosed within the altar on which the Holy Sacrifice of the Mass will be offered.

The Symbolism of Incense

The mystical meaning of incense is not difficult to comprehend. By its burning it symbolizes the zeal with which the faithful should be animated; by its sweet fragrance, the odor of Christian virtue; by its rising smoke, the ascent of prayer before the throne of the Almighty. As St. John tells us in the Apocalypse, or Book of Revelations: “The smoke of the incense of the prayers of the saints ascended before God from the hand of the Angel.” (Apoc. 8, 4)

The Externals of the Catholic Church

The use of incense, then, is a beautiful example of the wisdom of our Church which adapts to our own purposes all that is good in every creed, all that will typify the spirit with which she wished her children to be animated, all that will aid them to attain to true fervor, all that will add solemnity to the worship which she offers to God.

Source: “The Externals of the Catholic Church: Her Government, Ceremonies, Festivals, Sacramentals, and Devotions” By Reverend John F. Sullivan, 1867.