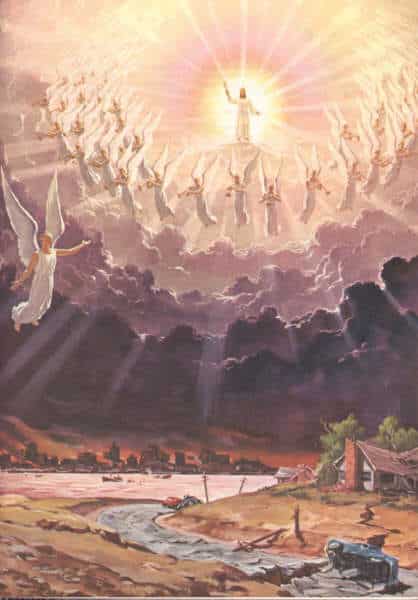 The Last Judgment, Final Judgment, Day of Judgment, Judgment Day, or The Day of the Lord in Christian theology, is the final and eternal judgment by God of all nations. It will take place after the resurrection of the dead and the Second Coming of Christ (Revelation 20:12–15).

The doctrine, iconographic depiction and musical compositions of the “Last Judgment” are drawn from many passages from the apocalyptic sections of the Bible, but most notably from Jesus’ teaching of the strait gate in the Gospel of Matthew and also found in the Gospel of Luke.

Dies Irae (The Day of Wrath) has a prominent place among the seven great hymns of the Roman Catholic church describing the Day of Judgement. This hymn was composed by Thomas of Celanto (a small town in the Abruzzo Ulteriore).  He was one of the early disciples of St. Francis of Assisi, and held the office of Custos in various Franciscan houses from 1221 to the time of his death around 1255. He also wrote a biography of St. Francis, which is incorporated in the Acta Sanctorum.

The Dies Irae has been used in the Roman liturgy as the sequence for the Requiem Mass for centuries, as evidenced by the important place it holds in musical settings such as those by Mozart and Verdi. Today, it appears in the Traditional Roman Missals, the Roman Breviary (the Liturgy of the Hours, or Divine Office) and chanted in churches where the Tridentine Latin liturgy is celebrated. It is also a part of the traditional liturgy of All Souls’ Day.

“And I saw the dead, great and small, standing in the presence of the throne, and the books were opened; and another book was opened, which is the book of life; and the dead were judged by those things which were written in the books, according to their works. And the sea gave up the dead that were in it, and death and hell gave up their dead that were in them; and they were judged every one according to their works. And hell and death were cast into the pool of fire. This is the second death. And whosoever was not found written in the book of life, was cast into the pool of fire.” ~ Revelation 20:12-15

Signs of the Times of the Last Days

As to this event St. Paul admonishes the Thessalonians (2 Thessalonians 2:3) that they must not be terrified, as if the day of the Lord were at hand, for there must first come a revolt (he apostasia). The Fathers and interpreters understand by this revolt a great reduction in the number of the faithful through the abandonment of the Christian religion by many nations. Some commentators cite as confirmatory of this belief the words of Christ: “But yet the Son of man, when he cometh, shall he find, think you, faith on earth?” (Luke 18:8).

In the reforms to the Roman Catholic liturgy ordered by the Second Vatican Council, the “Consilium for the Implementation of the Constitution on the Liturgy”, the Vatican II body charged with drafting and implementing the reforms, eliminated the sequence as such from funerals and other Masses for the Dead. Thus they removed such familiar and even beloved texts as Dies Irae and Libera me, Domine.

The reign of Antichrist

In the passage above mentioned (2 Thessalonians 2:3 sqq.) St. Paul indicates as another sign of the day of the Lord, the revelation of the man of sin, the son of perdition. “The man of sin” here described is generally identified with the Antichrist, who, says St. John (1 John 2:18), is to come in the last days. Although much obscurity and difference of opinion prevails on this subject, it is generally admitted from the foregoing and other texts that before the Second Coming there will arise a powerful adversary of Christ, who will seduce the nations by his wonders, and persecute the Church.

The Scriptures clearly indicate that the judgment will be preceded by unwonted and terrifying disturbances of the physical universe (Matthew 24:29; Luke 21:25-26). The wars, pestilences, famines, and earthquakes foretold in Matthew 24:6 sq. are also understood by some writers as among the calamities of the last times.

In the Apostolic writings we are told that the end of the world will be brought about through a general conflagration, which, however, will not annihilate the present creation, but will change its form and appearance (2 Peter 3:10-13; cf. 1 Thessalonians 5:2; Apocalypse 3:3, and 16:15).

The Trumpet of Resurrection

Several texts in the New Testament make mention of a voice or trumpet which will awaken the dead to resurrection (1 Corinthians 15:52; 1 Thessalonians 4:15; John 5:28). According to St. Thomas (Supplement 86:2) there is a reference in these passages either to the voice or to the apparition of Christ, which will cause the resurrection of the dead.

“The sign of the Son of Man appearing in the heavens”

In Matthew 24:30, this is indicated as the sign immediately preceding the appearance of Christ to judge the world. By this sign, the Fathers of the Church generally understand the appearance in the sky of the Cross on which the Saviour died or else of a wonderful cross of light.