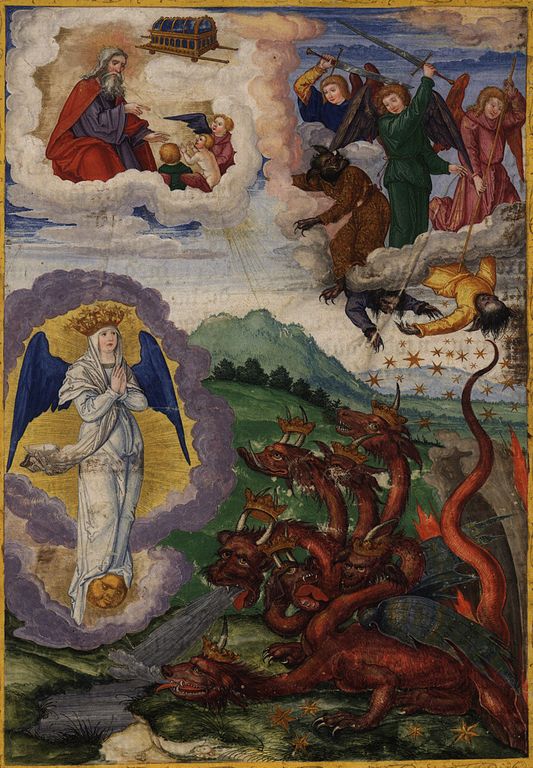 1. And the fifth angel sounded the trumpet, and I saw a star fall from heaven upon the earth, and there was given to him the key of the bottomless pit.

3. And from the smoke of the pit there came out locusts upon the earth. And power was given to them, as the scorpions of the earth have power:

4. And it was commanded them that they should not hurt the grass of the earth, nor any green thing, nor any tree; But only the men who have not the sign of God on their foreheads

6. And in those days men shall seek death, and shall not find it: and they shall desire to die, and death shall fly from them.

7. And the shapes of the locusts were like unto horses prepared unto battle: and on their heads were, as it were crowns like gold: and their faces were as the faces of men.

8. And they had hair as the hair of women; and their teeth were as lions:

10. And they had tails like to scorpions, and there were stings in their tails; and their power was to hurt men five months. And they had over them

11. A king, the angel of the bottomless pit; whose name in Hebrew is Abaddon, and in Greek Apollyon; in Latin Exterminans.

The vision described in this chapter is one of the most important of the whole Apocalypse. It foretells the first woe announced by the flying eagle,—the conditions and events destined to usher in the reign of Antichrist.

1. In the fallen star ancient commentators saw a figure of Arius and other early heretics. As a matter of fact, any priest or bishop of the Church who becomes the leader of heresy may be compared to a star fallen from heaven. But in this case the star refers to some particular person whose revolt from the Church shall lead directly to the reign of Antichrist.

We cannot agree with those who refer the beginning of this vision to the early ages of the Church. The prophecies of St. John are developed in regular order according to time. This vision marks a new period of exceptional gravity for the Church. We hold with Cornelius a Lapide and many others that it refers to the pretended Reformation with the star as a symbol of Luther. In that case the fifth angel may be taken as a figure of the defenders of Catholic Faith in those days.

The Arian heresy and the Greek schism had deplorable results for the Church, but they cannot be compared to those of the religious upheaval of the sixteenth century. Most of the evils that afflict the Church and society in general can be traced directly to the so-called Reformation. To it must be ascribed the apostasy of nations, the weakening of faith, and the rapidly increasing impiety and unbelief of the present day. As a result of these evils great social disturbances appear on every side, and society is tottering to its very foundations. The reign of Antichrist, which must be relatively near, will mark the culmination of evil.

2. Instead of the ”keys of heaven” this apostate priest received the ”key of the bottomless pit.” He did in very truth open the pit by turning loose against the Church all the fury of hell. By tongue and pen he instilled into the hearts of individuals and nations a diabolic hatred of the Church which still manifests itself in calumny, misrepresentation and opposition to the Church. The dense smoke arising from the pit obscures the heavens. This signifies that the heresy shall succeed for a time. True Catholic doctrine is obscured and even lost to many peoples.

3. From the smoke of the pit comes forth a swarm of locusts. Unlike ordinary locusts they attack men instead of growing plants* In this respect they have the power or nature of scorpions. These locusts are a fitting image of demons, heretics, and apostates who swarm over the earth spreading spiritual destruction far and wide.

4-5. These verses make it clear that there is no question of real locusts such as those that ravaged Egypt in the days of Moses. They are purely symbolic, and their ravages chiefly spiritual. Their sting burns and poisons the soul with false doctrines, but has no power to injure those who remain faithful to the graces received in Baptism and Confirmation. For a short time these locusts are permitted to harass and persecute without killing, but they cannot destroy the Church.

6. In those days men seek death and find it not. The good would welcome death as an escape from the evils and miseries that surround them. Many who have been led astray by false doctrines would likewise welcome death as a relief from their doubts and remorse of conscience.

7. The locusts resemble horses accoutred for war. Heresy and schism are ever fruitful sources of religious wars and persecutions. The crowns indicate that rulers, —emperors, kings, and princes will be arrayed against the Church as actually happened at the Reformation in the sixteenth century. The crowns merely resembled gold, because there was but a mere semblance of real Christian charity in those days. The human faces prove that these locusts symbolize real persons.

8-10. The hair of a woman probably signifies vanity and immorality; the teeth of a lion strength and cruelty. The breastplates of iron show preparedness for defense as well as for attack. The sound of their innumerable wings resembles the thunder of chariots rushing to battle. This indicates their great numbers and impetuosity. The scorpion-like sting is a symbol of heresy that stings and poisons the soul. Its location in the tail signifies deceit and hypocrisy.

11. The king of these symbolic locusts is called the Destroyer (Exterminans). He is Lucifer, the angel of the abyss, the leader of the rebel angels. His minions on earth are the leaders of heresy, schism, and persecution.