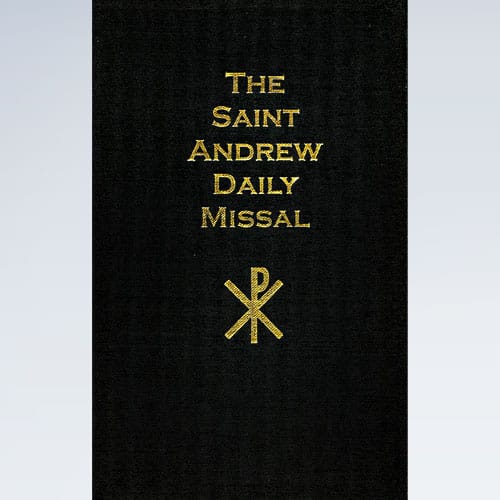 Shopping for a 1945, 1958, or 1962 Daily Missal can be difficult… but we have made most popular Traditional Missals available from Virgo Sacrata shop. This page is designed to help those who wish to purchase a Missal for their devotional use.

The Latin Mass is truly beautiful and holy. Having a good missal helps you to enjoy and appreciate it all the more. This use of a hand Missal is a well-established practice. There are many ways in which the Faithful can assist at Mass and thereby join with the Priest in the offering of the Holy Sacrifice. Many people find that the use of a hand Missal, with text in Latin and English, helps them to avoid distraction and follow the Mass with understanding and devotion.

When buying a Missal, consider the following information:

Date of Publication: Try to find a Missal published between 1945 to 1962, and certainly no later. An earlier publication date will not include additional feasts added to the Universal Calendar, or the revision of the Holy Week celebrations made in 1955. People considering buying a Missal should consider how much of a disadvantage not having these texts would be, especially if there is the possibility of attending the Holy Week ceremonies at a Church or Chapel using the revised liturgy, or vice versa, for those who are using the older liturgy. Avoid all Missals published on or after 1965, unless it is a modern re-print of a version published up to 1962.

When buying a 1962 Missal of the “Latin Mass”, beware about Pius XII’s reform of the Roman Calendar which eliminated more than half of the Church’s Vigils and almost all of the traditional Octaves. The machinations of Annibale Bugnini were well on their way in the middle 1950’s with the planned reforms given to us by Pope John XXIII in the Missal of 1962 revisions.

There was a removal of traditional Octaves, a simplification of Feasts, the liturgical treasures of Holy Week were sabotaged and brought major changes to the liturgies of Holy Week in 1956, including virtual elimination of Commemorations and Votive masses such as Feast of the Expectation of the Blessed Virgin Mary, Rorate Cæli, Holy Face, the Mass Against the Heathen, and etc.

It was an easy target for the radical reformers and because many faithful are now frozen at 1962 as per (now abrogated) Summorum Pontificum, you might only hear them at Mass in an independent chapel that might refuse the Missal of 1962. The Society of St. Pius X, and Fraternity of  St. Peter follow 1962 Missals.

Latin and English: Hand missals differ between how much of the texts are given in Latin and English. While most will have a bilingual texts of the Ordinary of the Mass placed side-by-side, the texts of the Proper Prayers (ie. the variable parts) may only be in English. Before making a purchase it is important to decide if it is important that you have all of the texts in both languages.

Daily, Sunday and Booklet Missals: Be clear whether the Missal you are considering contains texts for the entire year (Daily Missals), or just for Sundays and Major Feasts. Booklet ‘Missals’ will normally contain only the text of the Ordinary (ie. fixed) portions of the Mass. If you only need the Latin and English version of the Ordinary of the Mass, we have made available the Sunday Missal Booklets in our store.

Quality & Bindings: Missals may be presented in real or imitation leather, vinyl or cloth-covered boards. If buying a second-hand Missal, make sure that the cover is not cracked or that the pages are firmly bound and not damaged by damp or over-use.

Which Traditional Missal to buy?

The St. Andrew Daily Missal is the original 1945 reprint without revisions. One of the most popular Tridentine missals. Throughout the missal, there is Latin and English text side-by-side. The Ordinary of the Mass contains the rubrics, printed in red, which the priest follows while offering the Mass. Each feast has a brief narrative of the Saint for the day. The missal also includes Vespers for Sundays and other feast days.

Please note that several Mass changes after 1945, especially the major changes for Holy Week are not in this version. St Andrew missal has by far the most accurate/detailed information and explicit explanations for various masses, holy days etc. St. Andrew Missal has another great “plus” in that it has beautiful explanations and commentary before each and every Sunday’s liturgy, as well as for those of the special Feast Days. Over 1900 pages – Hardcover — well bound book that will last for ages  – 5 liturgically-colored ribbons.

The New Roman Missal for daily use, often called Fr. Lasance Missal. This is a beautiful reproduction of the original 1945 text of the immortal Latin Tridentine Mass, according to the Council of Trent, with complete Latin and English text for the Ordinary and Prospers of the Mass. There are no revisions, but additions made according to the Papal decrees dating from 1945 to the end of Pope Pius XII’s reign include the Mass Propers and the Divine Praise of the Assumption. It contains many devotional prayers. The binding is sewn with black leatherette covers and gold lettering. The pages have rounded corners and golden edges. Complete with 6 colored ribbon dividers. 1852 pages.

The New Marian Missal is a faithful reprint of the 1958 edition by S. P. Jeurgens – Doctor of Sacred Theology. Latin/English. Durable flexible leatherette cover with genuine gold lettering on the spine and cover. Moveable feasts through AD 2045; exquisite black and white illustrations characterize this edition. Very compact, 1448 pages. A beautiful missal for its completeness, compact size, readability and price.

Published in association with the Society of Saint Pius X (SSPX) by the  AngelusPress, this  1962 Roman Catholic Daily Missal is  the most complete Latin-English Missal ever produced!  This Tridentine Latin/English daily missal has been newly typeset in over 40 years!  All the Masses of the Liturgical Year according to the Roman Calendar of 1962. This missal includes the complete texts of the liturgy in both Latin and English. This new missal is a tremendous blessing to all who want to “pray the Mass” with increasing fervor. It is a sure means to helping Catholics deepen their appreciation for the Extraordinary Form of the Roman Rite – the Tridentine Latin Mass. All readings in English (Douay-Rheims) and Latin. All music in Gregorian notation. Ordinary with rubrics in RED.  Over 1,980 pages – flexcover,  – 5 liturgically-colored ribbons. Prefaces of the mass are included before the canon so you don’t have to look for them and use up an extra ribbon.

Published in 2008 by Baronius Press Limited in association with The Priestly Fraternity of St. Peter (FSSP). It is based on the Marian Missal, also available from Virgo Sacrata shop. The Baronius Press Missal contains English translations and the Latin originals of the rites and texts for Holy Mass and many other liturgical ceremonies that were attended by the vast majority of Roman Catholics in the centuries before the liturgical reforms of Vatican Council II took effect. The liturgy of the 1962 Daily Missal is better known as the “Tridentine Mass”, “Traditional Latin Rite” or “Traditional Roman Rite” and since 2007 as the “Extraordinary Form of the Roman Rite”.  Over 2,240 pages printed in red/black – flexcover, – 5 liturgically-colored ribbons.

Please be aware that all hand missals currently available in print, in some parts, have excessively small print, but pretty clear type. For people with with sight problems, the only “alternative” would be the “Manna of the Soul” by Father Lasance. This is the only truly large print prayer book available with all of the old traditional prayers.

O God, who for the overthrowing of the enemies of Thy Church, and for the restoring of the beauty of Thy worship, didst choose blessed Pius as supreme Pontiff: grant that we may so cleave unto Thy service, that overcoming all the snares of our enemies, we may rejoice in Thy eternal peace. (Collect for the Feast of St. Pius V )