This is a Catholic work on “eternal punishment” looking at the nature of eternal punishment, comments and teaching in Scripture, Tradition, and reason, and the final chapter is special questions. By Rev. J. P. Arendzen, Nihil Obstat and Imprimatur 1928.  Softcover, 84 pages.

This book – Eternal Punishment – was written to answer the objections which beset many honest minds in regard to eternal punishment. The reader will not only find a clear explanation of Catholic doctrine, but will be pleased to note that the objections against the doctrine of hell are met honestly and with clearness that should be helpful to those wishing to know what the Catholic Church teaches.

Those who carefully study everyday conditions clearly see that religious faith is breaking down among those outside the Catholic Church. Religious indifferentism is growing more and more prevalent. In the daily newspapers and in magazines shallow writers allude scornfully to religious dogma as something long since relegated to the scrap heap of antiquated ideas. The doctrine of eternal punishment is especially ridiculed. There is a growing number of men and women who seem to consider it extremely vulgar to take Jesus Christ literally and to believe in hell.

Punishment is pain justly inflicted in consequence of evil done. It is purely medicinal, if its sole purpose is to bring the evil-doer to repentance and to enable him to undo the evil wrought. It is purely vindictive or avenging, if its purpose is to vindicate and restore the glory and honour of one who has been offended by the evil deed, and thus to restore the balance of justice by placing the evil-doer in an evil plight on account of the evil done.

Punishments on earth are, or ought to be, chiefly of a mixed character, partly curative, partly vindictive. The punishment of hell is purely vindictive. It has no medicinal purpose for the sinner undergoing it, though it has also a preventive purpose, by being a deterrent to others.

As in many minds the word hell stands merely for some confused idea of endless horror and misery, without any precise conception of its nature and what the Catholic Church teaches concerning it, we must needs begin with a simple exposition of what the Church means by hell.

What, then, is hell?

It is primarily the permanent deprivation of the Beatific Vision, inflicted on those who die in mortal sin.

As the Old Testament was a progressive revelation, the doctrine of everlasting punishment for the wicked gradually gained in clearness as the time went on and approached the fulness of revelation in Christ. The Jews began with an exceedingly vague idea of the world beyond the grave. Considering that the Jews stayed for many generations in Egypt, where the ideas about reward and punishment hereafter were worked out in such minute detail and with such terrible crudity, this mentality must be. due to a deliberate refusal to entertain the thoughts of their fellow-countrymen and contemporaries, and it was no doubt the way of Providence to guard them from the fearful superstitions of the heathen world.

The New Testament opens with the teaching of St John the Baptist. “Every tree that bringeth not forth good fruit shall be cut down and cast into the fire.” Of Christ the Baptist prophesies: “His fan is in his hand, and he will purge his floor and will gather the wheat into his barn: but the chaff he will burn with unquenchable fire.” “He that believeth in the Son hath life everlasting, but he that believeth not the Son shall not see life: but the wrath of God abideth on him” (Matt 3:10, 12; Luke 3:9, 17; John 3:36).

This Scriptural teaching has been continuously, unhesitatingly, and emphatically proclaimed by the Church throughout all ages. It would be difficult to find a Christian dogma which, historically speaking, is more undoubtedly an integral part of the Christian revelation than the eternity of punishment for the reprobate. The supreme alternative between final salvation and final reprobation constitutes, and has always constituted, the very warp and woof of the Christian ethical system. The work of Christ in atonement and redemption has always been taken as that of a rescue from eternal damnation, never merely from a temporary punishment. The rejection of Christ has never been regarded as something which involved, indeed, a terminable period of distress, but not a final condemnation by God. The awfulness of the Christian appeal has always lain in the final choice between life and death, not in a reversible choice of a more or less lengthy period of happiness or sorrow. The whole of its moral system, the whole of its soteriology or its scheme of salvation, is essentially, intrinsically bound up with the conviction that this life is a period of trial deciding an eternal issue.

Could human reason, unaided by divine revelation, in all rigour of logic prove the existence of eternal punishment? Possibly not. In a discussion which involves the appreciation of moral values, it is always difficult to construct an argument so compelling as to leave no loophole for doubt in those who are strongly averse to a particular conclusion.

The Scriptural word “fire,” as we have seen, may not be taken as a mere metaphor. It has been asked whether we are also to understand literally “the worm that dieth not”; what, in any case, the meaning of the expression may be. 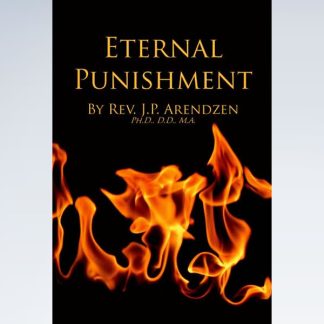 You're viewing: Eternal Punishment US$ 14.00
Add to cart