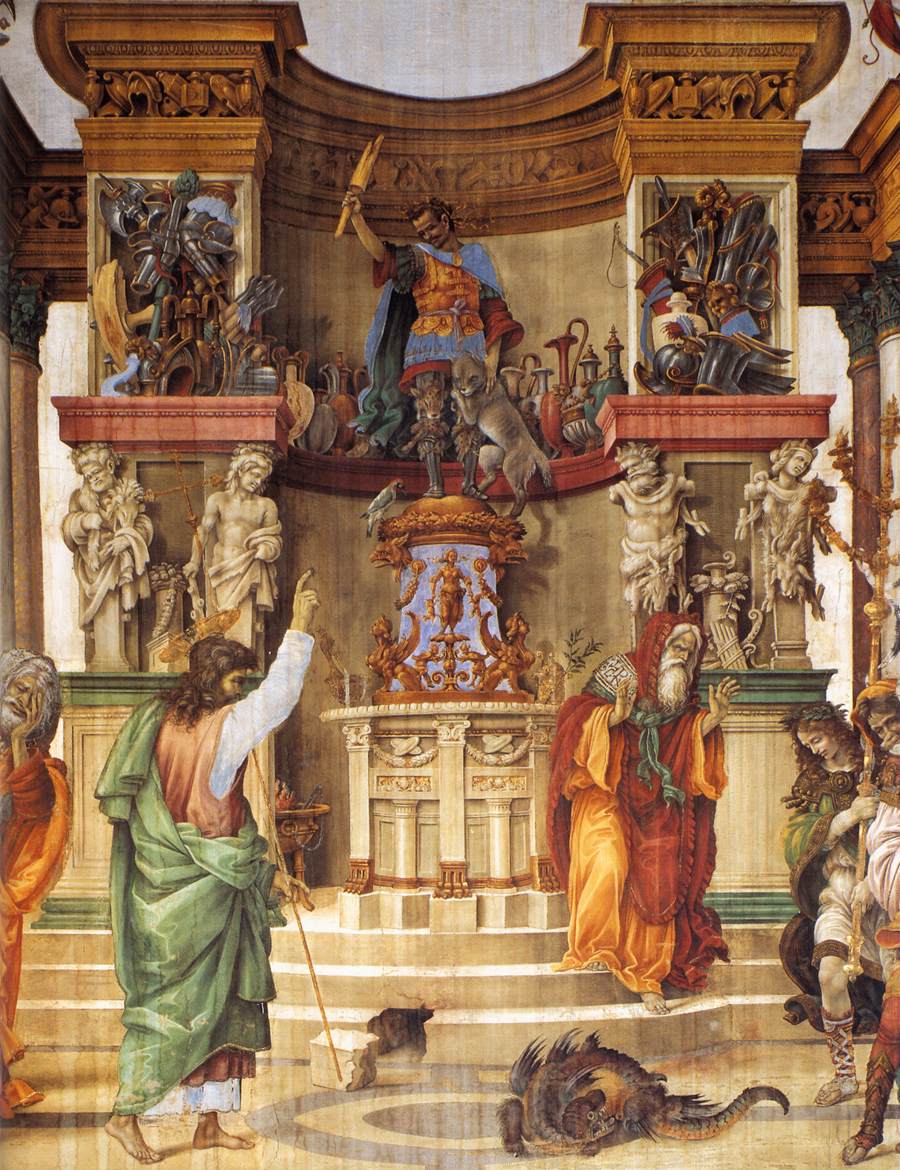 Some of the richest treasures of the traditional Roman Liturgy are the Votive Masses near the back of the Missal. I was recently reminded of this when assisting at Holy Mass. That day, the celebrant availed himself of his option on a fourth-class feria to offer the Missa votiva pro Ecclesiae defensione (votive Mass for the defense of the Church). The St. Andrew’s Missal I use calls it by the much more “offensive” title, “Mass Against the Heathen.”

The propers that go with this Mass are a reminder that the Most Holy Trinity is, even after the Incarnation, the strong living God of the Old Testament, the God of Armies, the conquering Deliverer of His people, who strikes their enemies down into the dust. The difference, of course, is that “His people” are now, as the Collect of this Mass calls them, “the Christian people.”

That Collect reads in its entirety:

Almighty everlasting God, in whose hand are the power and the government of every nation; look to the help of the Christian people, that the heathen nations, who trust in their own fierceness, may be crushed (conterantur 1) by the power of Thy right arm.

Whoever authored this prayer evidently did not undergo sensitivity training. No, this was penned at a time when churchmen were unafraid to point out that we have enemies, that these enemies are God’s enemies, and that they ought to be “crushed.” Consider the fact that the Church doesn’t merely state this, but she prays it, and enjoins her sacred ministers to pray it, and, by extension, invites all the faithful to make this heathen-crushing intention their own.

Those who think the Old Testament God was exclusively “just,” while the New Testament God is exclusively “merciful” would shut their mouths in the presence of such contrary evidence. They would shut their mouths if, that is, they considered the Church’s traditional liturgy a treasure to preserve and not an accretion to excise. But even if they shun the traditional Missal, they still can’t get away from the fact that the Psalter — the prayer book Jesus used, and that the Church still prays  — is full of such sentiments.

Evidently, the Church was not praying that Christian armies would drain the lifeblood out of peace-loving agrarian infidels, or that God would send the angel of death to strike the firstborn of pacifistic pantheists, no matter how religiously wrong such people are. As is manifest in the prayer just quoted, the objects of our wrathful piety are those pagans “who trust in their own fierceness.” Or, as the Church instructs us in the very title of this votive Mass, the prayer is “for the defense of the Church” against heathen aggressors. There have been many throughout history, are still many presently, and will likely be many in the future.

The Epistle the Church has selected for this Mass is taken from the Book of Esther. It is the trustful prayer of Esther’s uncle, the just man Mardochai, who beseeches God for the deliverance of Israel from the wicked machinations of Aman. I’ll not tell the story here, but Aman ends up literally hanging from the gibbet he had prepared for Mardochai — so the prayer worked. In this Old Testament episode, by the way, Esther was a type of the Blessed Virgin Mary, who intercedes for us with God, just as Esther besought the mercy of King Assuerus and obtained the deliverance of her people.

The faith-filled and efficacious prayer of Mardochai is a model of trustful surrender to the Divine will:

O Lord, Lord, almighty king, for all things are in your power, and there is none that can resist your will, if you determine to save Israel. …  O Lord, O king, O God of Abraham, have mercy on your people, because our enemies resolve to destroy us, and extinguish your inheritance. … Hear my supplication, and be merciful to your lot and inheritance … and shut not the mouths of them that sing to you.

Since the foundation of the Catholic Church, we Christians are Israel. By virtue of the continuity of religion, the faithful of the Catholic Church can speak of their own mouths as “the mouths of them that sing to you” — mindful of the fact that the New Testament Liturgy of Holy Mass in its more solemn form is literally “sung,” just as Old-Testament liturgical prayer was. Since we still sing God’s praises, and since we yet have enemies bent on the destruction of Holy Church, then we can fittingly offer Mardochai’s prayer.

The Gospel is from Luke 11:5-13, wherein Our Lord instructs us through different figures on the necessity and benefits of persevering prayer. The heart of the reading is this: “And I say to you: Ask, and it shall be given you: seek, and you shall find: knock, and it shall be opened to you. For every one that asks receives: and he that seeks finds: and to him that knocks it shall be opened.”

This Epistle and Gospel are two witnesses testifying to the truth that the principal weapon of the Christian is prayer, a fact I’m reminded of every morning when I put my Rosary on my habit, asking God to “…arm me with the weapon of the most holy Rosary.” Religious that wear Rosaries on their habits, generally put them in the place traditionally reserved for a man’s sword.

There are those who outright deny that the Church or the Christian faithful have enemies. Current events might serve to arouse them from their slumber. In a conversation with a bishop some decades ago, Brother Francis referred to the Church’s “enemies.” Citing the changes in the Church since Vatican II, His Excellency replied that the Church no longer has enemies. Brother Francis respectfully replied that this puts us in a dilemma, since Our Lord instructed us to “Love your enemies: do good to them that hate you: and pray for them that persecute and calumniate you” (Luke 5:44). The bishop knew he’d been bested, but also knew Brother respected his office. Brother Francis had a disarming way about him.

We really do have enemies: theological ones, political ones, ideological ones, and even military ones. Whether their weapons be unjust laws, journalistic smear campaigns, guns, or torture, there presently exist real-life enemies of Holy Mother Church from whom we ought to pray for deliverance.

As Christians, vengeance is something forbidden us. Further, our ultimate desire in regard to our enemy is his conversion, so that he can become our friend and brother in Christ. It’s significant that the votive Mass “against the Heathen” is sandwiched between two other votive Masses praying for the conversion of non-Catholics: pro Fidei propagatione (for the propagation of the Faith — specifically in pagan lands) and pro Ecclesiae unitate (for the unity of the Church). As long as we have these holy, Catholic, and apostolic priorities down, we need not worry about becoming “unchristian” in speaking of the Church’s enemies.

Both the Secret and the Postcommunion refer to the faithful as God’s “champions.” This, for example, is from the Postcommunion: “…defend Thy champions (propugnatores 2) from peril of the heathen.”  This petition demands that we be morally worthy to be considered God’s “champions” if we wish Him to defend us. If we seek God’s help, we must live the life of grace.

Solomon the Wise tells us that “All things have their season, and in their times all things pass under heaven. … A time of love, and a time of hatred. A time of war, and a time of peace” (Eccles. 3:1,8). In the New Testament, St. Paul prudently admonishes us in Romans (12:18): “If it be possible, as much as is in you, have peace with all men.” Note the caution he displays in writing “if it be possible.” Surely, it is not always possible to be at peace, so the Church has her just war doctrine to help us determine if we are legitimately in “a time of war.” And when there is no war, but there is persecution, then it’s time to invoke the God of our fathers, beseeching him to conquer our enemies, as the Church prays in the Gradual of our present votive Mass:

O, my God, make them like a wheel and as stubble before the face of the wind.

In the Immaculate Heart of Mary,
Brother André Marie, M.I.C.M.

1.) This is the same verb used in the Latin Vulgate translation of Genesis 3:15: ipsa conteret caput tuum, “she shall crush thy head,” which the Church’s liturgy applies to Mary.

2.) This word, propugnator, means “champion, defender,” or, literally “front-line fighter,” as distinguished from a mere “fighter” (pugnator). Pugnus is the noun “fist”; pugnāre is the verb “to fight.” One can see that the English “pugnacious” has its origin here.

Related Topics for the Defense of the Church and Christian People

The crusades were a series of holy wars called by popes with the promise of indulgences for those who fought in them and directed against external and internal enemies of Christendom for the recovery of Christian property or in defense of the Church or Christian people.  Crusades were characterized by the taking of vows and the granting of indulgences to those who participated.  Like going on pilgrimage, to which they were often likened, crusading was an act of Christian love and piety that compensated for and paid the penalties earned by sin.  It marked a break in earlier Christian medieval conceptions of warfare in that crusades were penitential warfare. Crusades combined the ideas of: a) Holy War and b) and Pilgrimage to produce the concept of “indulgence” (remission of penance and/or sin granted by papacy for participation in sacred activity.