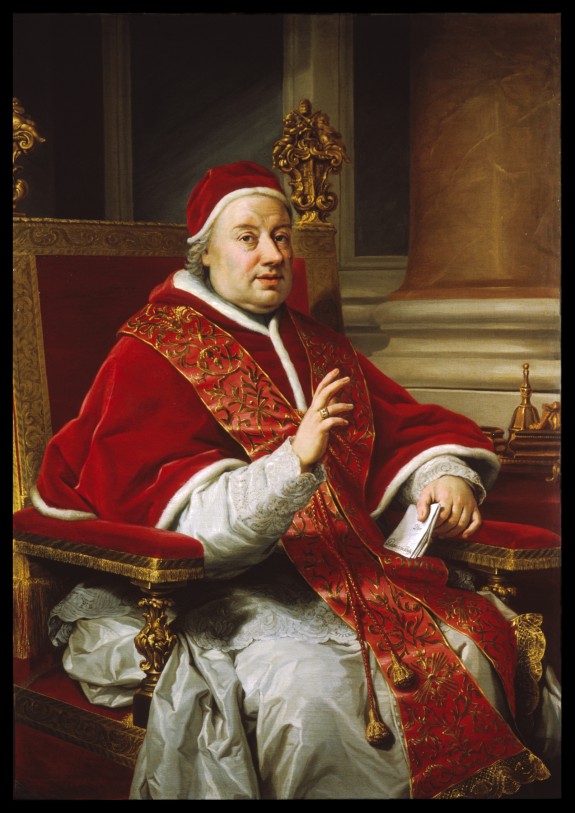 Since the Most Holy Sacrament of the Eucharist by means of which Christ Our Lord has made us partakers of His Sacred Body, and ordained to stay with us unto the consummation of the world, is the greatest of all the Sacraments, and it is accomplished in the Holy Mass and offered to God the Father for the sins of all the people, it is highly fitting that we who are in one body which is the Church and who share of the one Body of Christ, should use in this ineffable and awe-inspiring Sacrifice the same manner of celebration and the same ceremonial observance and rite.

Not only have the Roman Pontiffs, Our Predecessors, always desired, and for a long time greatly striven to achieve, this aim, but above all Pope Pius V of happy memory undertook, in accordance with the decree of the Council of Trent, to bring the Roman Missal into conformity with the old and purer pattern and to have it printed in Rome.

Although he very severely forbade under many penalties that anything should be added to it, or that anything for any reason be removed from it, nevertheless, in the course of time, it has come to pass that, through the rashness and boldness of the printers, or of others, many errors have crept into the missals which have been produced in recent years.

That very old (Latin) version of the Holy Bible, which even before St. Jerome’s time was held in honor in the Church, and from which almost all the Introits, Graduals, and Offertories of the Masses had been taken, has been entirely removed; the texts of the Epistles and Gospels, which hitherto were read during the celebration of the Mass, have been disturbed in many places; different and utterly unusual beginnings have been prefixed to the Gospel texts; and finally many things have been here and there arbitrarily altered.

All these changes seem to have been introduced under the pretext of conforming everything to the standard of the Vulgate edition of Holy Writ, as if it were allowable to anyone to do so on his own authority, and without the advice of the Apostolic See.

Having considered these innovations, in Our pastoral solicitude which induces us to earnestly protect and preserve in everything and especially in the sacred rites of the Church the best and old norm, We have ordered in the first place that the above mentioned printed Missals, so corrupted, be banned and declared null and void and that their use be disallowed in the celebration of the Mass, unless they be entirely and in everything emended according to the original text published under Pius V.

We have also entrusted some of Our Venerable Brethren, Cardinals of the Holy Roman Church, versed in Holy Writ and skilled in ecclesiastical antiquity, with the business of restoring the Missal to its primitive and purest form. In their loyalty to Us, and in their piety and devotion to the Church, these Cardinals, employing also other learned men trained in ecclesiastical scholarship and having searched for, and diligently examined, old Missals and other books bearing upon the subject, have endeavored to restore the Roman Missal to its original purity and to confirm and attest the painstaking care and diligence of Pius V and of those appointed by him.

It happened, however, that in the carrying out of this task, as a result of an accurate comparison of ancient books, some things have been improved upon and, concerning the rules and rubrics, some points have been more fully and clearly stated. These improvements, however, flowing as it were from the same sources and principles, seem rather to represent and complete the meaning of the rules and rubrics than to introduce anything new.

We have ordered, therefore, that the Missal which the same Pius V had edited, thus revised, be printed as faultlessly as possible at Our Vatican printing press and that it be published for the common benefit. In order that its use may be preserved for all future time in perpetuity in every part of the Christian world, We decree that this Missal may be printed in Our City of Rome at the same printing press only and not elsewhere. We permit, however, that outside the City, it may be printed according to the original now edited at the afore-named printing press and not otherwise, on condition that any printer wishing to print it, shall be allowed to do so, after having asked for, and obtained in writing, the license of Our beloved Sons, the Inquisitors against heretical depravity, in the places where they are established, and of the Ordinary of the place where there is no Inquisitor.

Otherwise, if without this permission, they dare to print the above-mentioned Missal in whatever form, or the booksellers dare to sell it, the printers and the booksellers established outside Our Ecclesiastical State shall incur excommunication latae sententiae from which, save on the point of death, they may not be absolved except by the Roman Pontiff. The printers and booksellers established in the City and in other parts of the Ecclesiastical State shall incur the fine of five hundred gold ducats of the Treasury and forfeit unpardonably without any further declaration all their books and types which are to be devolved on the said Treasury. And we forbid and prohibit in perpetuity for all places and peoples under the same penalties the use of such Missals as might be printed and sold without the necessary permission.

Before granting this permission, the Inquisitors or the Ordinaries must very diligently compare the Missals to be printed, both before and after they are printed, with the standard text revised by Our Authority and now printed and they must not allow anything to be added to, or removed from, it. Nor may they maintain that they have not incurred the penalties set forth hereunder, by pleading as an excuse the negligence of the printers or the lack of diligence on the part of the proof-readers or perhaps of those engaged by them.

When issuing the original document granting the license, they must certify in their own handwriting that, having made the collation, the Missals entirely agree with the standard edition. This document must be printed always, at the beginning or at the end of every Missal.

If they act otherwise, the Inquisitors shall incur on that account, the penalty of being deprived of their office and of being debarred from getting it back and obtaining other offices in the future; the Bishops and the Ordinaries shall incur the penalty of suspension a divinis and of interdiction from entering the Church; and their Vicars shall similarly be deprived of their offices and benefices, they shall be debarred from obtaining these and other offices and benefices in the future and they shall incur excommunication, without any further declaration.

Wishing in Our Apostolic benignity to secure and protect from any loss all poor churches, clerics and ecclesiastics, printers and booksellers, We allow them to keep, use and sell respectively the Missals hitherto printed, which they possess, excepting only those which, as has been stated above, have been banned and declared null and void by Our Authority. Notwithstanding whatsoever licenses, indults and privileges hitherto granted by Us or by the Roman Pontiffs, Our Predecessors, to print the aforenamed Missal of Pius V, which by these presents We expressly revoke and which We wish to be revoked; and also the constitutions, Apostolic ordinances, general and special, granted in whatever manner, contrary to the above prescriptions, confirmed and approved.

From all these ordinances and from all other prescriptions to the contrary, for this time only, We specially and expressly derogate, albeit particular, specific and express mention is to be made of them and of their whole tenor, considering their tenor as expressed in these presents.

We wish that the same authority attaching to these presents, if exhibited and shown, be attributed to their copies, even printed ones, bearing the signature of a Notary Public and vouched for by the seal of a Church dignitary.

Given in Rome at St. Mark’s under the ring of the Fisherman, on 7 July 1604, the XIIIth year of Our Pontificate.