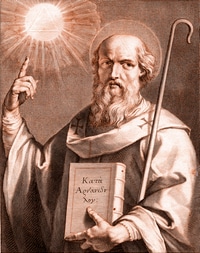 The Catholic Church Ravaged in the Fourth Century

Saint Athanasius lived in the fourth century during the time of what used to be considered the greatest crisis of faith ever to befall the Catholic Church, the Arian Heresy. (The Arians denied the Divinity of Our Lord Jesus Christ). The vast majority of Churchmen fell into this heresy, so much so that Saint Jerome wrote of the period, “The whole world groaned and was amazed to find itself Arian“. Athanasius was the Bishop of Alexandria in Egypt for 46 years. He was banned from his diocese at least five times and spent a total of 17 years in exile. He even suffered an unjust excommunication from Pope Liberius (325-366) who was under Arian influence. It is a cold fact of history that Athanasius stood virtually alone against the onslaught of heretical teaching ravaging the Church of his day – begetting the familiar phrase, “Athanasius contra mundum“, that is, “Athanasius against the world“.

The famous convert to the Church, Ven. John Henry Newman, described him as a “principal instrument, after the Apostles, by which the sacred truths of Christianity have been conveyed and secured to the world.” Often referred to as the Champion of Orthodoxy, Saint Athanasius was undoubtedly one of the most courageous defenders of the Faith in the entire history of the Church. If anyone can be singled out as a Saint for our times, surely it is Saint Athanasius. The following letter of his could, almost word for word, have been written yesterday.

“May God console you! … What saddens you … is the fact that others have occupied the churches by violence, while during this time you are on the outside. It is a fact that they have the premises – but you have the Apostolic Faith. They can occupy our churches, but they are outside the true Faith. You remain outside the places of worship, but the Faith dwells within you. Let us consider: what is more important, the place or the Faith? The true Faith, obviously. Who has lost and who has won in the struggle – the one who keeps the premises or the one who keeps the Faith? True, the premises are good when the Apostolic Faith is preached there; they are holy if everything takes place there in a holy way …

“You are the ones who are happy; you who remain within the Church by your Faith, who hold firmly to the foundations of the Faith which has come down to you from Apostolic Tradition. And if an execrable jealousy has tried to shake it on a number of occasions, it has not succeeded. They are the ones who have broken away from it in the present crisis. No one, ever, will prevail against your Faith, beloved Brothers. And we believe that God will give us our churches back some day.

“Thus, the more violently they try to occupy the places of worship, the more they separate themselves from the Church. They claim that they represent the Church; but in reality, they are the ones who are expelling themselves from it and going astray. Even if Catholics faithful to Tradition are reduced to a handful, they are the ones who are the true Church of Jesus Christ.“

A.D. 360: Saint Gregory Nazianzen says about this date: “Surely the pastors have done foolishly; for excepting a very few, who either on account of their insignificance were passed over, or who by reason of their virtue resisted, and who were to be left as a seed and root for the springing up again and revival of Israel (the Church. ed.) by the influence of the Spirit, all temporized, only differing from each other in this, that some succumbed earlier, and others later; some were foremost champions and leaders in the impiety, and others joined the second rank of the battle, being overcome by fear, or by interests, or by flattery, or, what was the most excusable, by their own ignorance.

Cappodocia: Saint Basil says about the year 372: “Religious people keep silence, but every blaspheming tongue is let loose. Sacred things are profaned; those of the laity who are sound in the Faith avoid the places of worship as schools of impiety, and raise their hands in solitude, with groans and tears to the Lord in Heaven.” Four years after he writes: “Matters have come to this pass: the people have left their houses of prayer, and assembled in the deserts, – a pitiable sight; women and children, old men, and men otherwise infirm, wretchedly faring in the open air, amid most profuse rains and snowstorms and winds and frosts of winter; and again in summer under a scorching sun. To this they submit, because they will have no part of the wicked Arian leaven.” Again: “Only one offense is now vigorously punished an accurate observance of our fathers’ traditions. For this cause the pious are driven from their countries and transported into deserts.“

In our time when impious novelties, liberalism and modernism are ravishing the Church under the pretext of “aggiornamento” (update!), and infidelity to Catholic Tradition is the order of the day, the above statements cannot help but strike the reader as a parallel of our time. As it was then so it is today.

Today we see the loss of faith among many Catholics occasioned by compromises in the Faith, both great and small, which have touched on the very essence of our Faith.

The majority of Church leaders have succumbed to the “spirit of the age”, and faithful Catholics now suffer at the hands of those who should be their protectors.

If the Arian crisis proves anything, if this historical lesson of the fourth century teaches us anything in the twenty-first century it is this: Falsehood cannot become truth no matter how many accept it but rather the truth of doctrinal teaching is to be judged by its conformity to Tradition and not by the number or even the authority of those teaching it. It shows to us that a pope can err as a private teacher and so much more the bishops.

Falsehood cannot become truth no matter how many accept it but rather the truth of doctrinal teaching is to be judged by its conformity to Tradition and not by the number or even the authority of those teaching it.

Another point the Arian crisis brings out is that Catholics true to the traditional faith may have to worship outside the official Churches, their parish churches and even to avoid them as schools of impiety. It proves that Catholics may even have to suffer false denunciation and excommunication (such as in case of Hermits of Westray and many others) for their beliefs as St. Athanasius suffered: today as always we must pray for the Church, the clergy and especially the bishops and Pope.

Only the good Lord knows how long this crisis will last but Our Blessed Mother has given us hope in Her prophecy at Fatima. “In the end, my Immaculate Heart will triumph and there will be peace in the world“.