Novum Testamentum Clementine Vulgate – New Testament is a truly unique edition of the Bible in Latin and English. Suitable either for students of theology and the Scriptures, for those studying Latin, or just for Catholics who wish to conduct themselves according to the mind of the Church. Clear Typeface. Hardbound.

Clementine Vulgate New Testament is truly unique edition of the Bible in Latin and English. Suitable either for students of theology and the Scriptures, for those studying Latin, or just for Catholics who wish to conduct themselves according to the mind of the Church, this edition brings together two classic versions of the Bible which have served Catholics well, down through the centuries.  It has an introduction for each book as well as headings throughout the books, in addition to cross references. It is well formatted and well made. If you want a Latin/English New Testament –  this one is a beauty, liturgically and aesthetically.

You urge me to revise the old Latin version, and, as it were, to sit in judgment on the copies of the Scriptures which are now scattered throughout the whole world; and, inasmuch as they differ from one another, you would have me decide which of them agree with the Greek original. The labour is one of love, but at the same time both perilous and presumptuous; for in judging others I must be content to be judged by all; and how can I dare to change the language of the world in its hoary old age, and carry it back to the early days of its infancy? Is there a man, learned or unlearned, who will not, when he takes the volume into his hands, and perceives that what he reads does not suit his settled tastes, break out immediately into violent language, and call me a forger and a profane person for having the audacity to add anything to the ancient books, or to make any changes or corrections therein? Now there are two consoling reflections which enable me to bear the odium—in the first place, the command is given by you who are the supreme bishop; and secondly, even on the showing of those who revile us, readings at variance with the early copies cannot be right. For if we are to pin our faith to the Latin texts, it is for our opponents to tell us which; for there are almost as many forms of texts as there are copies. If, on the other hand, we are to glean the truth from a comparison of many, why not go back to the original Greek and correct the mistakes introduced by inaccurate translators, and the blundering alterations of confident but ignorant critics, and, further, all that has been inserted or changed by copyists more asleep than awake?

I am not discussing the Old Testament, which was turned into Greek by the Seventy elders, and has reached us by a descent of three steps. I do not ask what Aquila and Symmachus think, or why Theodotion takes a middle course between the ancients and the moderns. I am willing to let that be the true translation which had apostolic approval. I am now speaking of the New Testament. This was undoubtedly composed in Greek, with the exception of the work of Matthew the Apostle, who was the first to commit to writing the Gospel of Christ, and who published his work in Judæa in Hebrew characters. We must confess that as we have it in our language it is marked by discrepancies, and now that the stream is distributed into different channels we must go back to the fountainhead. I pass over those manuscripts which are associated with the names of Lucian and Hesychius, and the authority of which is perversely maintained by a handful of disputatious persons. It is obvious that these writers could not amend anything in the Old Testament after the labours of the Seventy; and it was useless to correct the New, for versions of Scripture which already exist in the languages of many nations show that their additions are false. I, therefore, promise in this short Preface the four Gospels only, which are to be taken in the following order, Matthew, Mark, Luke, John, as they have been revised by a comparison of the Greek manuscripts. Only early ones have been used. But to avoid any great divergences from the Latin which we are accustomed to read, I have used my pen with some restraint, and while I have corrected only such passages as seemed to convey a different meaning, I have allowed the rest to remain as they are. 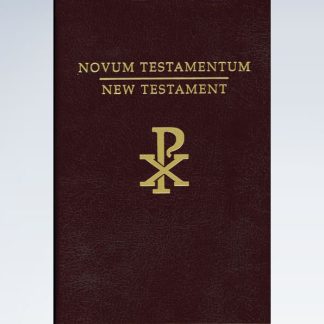 You're viewing: Novum Testamentum – New Testament (in Latin and English side-by-side) US$ 44.00
Add to cart