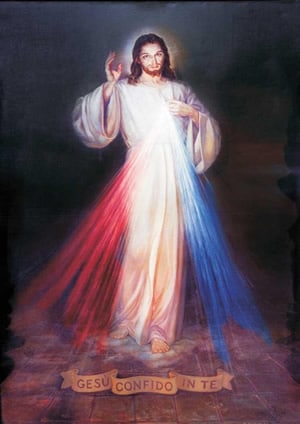 Pope Pius XII put the writings of Sr. Faustina on the Index Librorum Prohibitorum [Index of Forbidden Books]. That meant that he considered that their content would lead Catholics astray or in the wrong direction. Next, came other prohibitions made by Pope John XXIII. Twice in his pontificate, the Holy Office issued condemnations of the Divine Mercy writings.

Cardinal Ottaviani, as head of the Congregation for the Doctrine of the Faith (CDF), was responsible for the suppression of the Divine Mercy devotion. The Holy Office declared that “There is no evidence of the supernatural origin of these revelations.”

“New forms of worship and devotion, often enough ridiculous, usually useless imitations or corruptions of similar ones which are already legitimately established, are in many places, especially in these recent days, being daily multiplied and propagated among the faithful, giving occasion to great astonishment and to bitter aspersion on the part of non-Catholics”. (May 26, 1937; AAS 29-304)

“The Supreme Sacred Congregation of the Holy Office, having examined the alleged visions and revelations of Sister Faustina Kowalska of the Institute of Our Lady of Mercy, who died in 1938 near Cracow, has decreed as follows: The distribution of pictures and writings which present the devotion to the Divine Mercy in the forms proposed by Sister Faustina, should be forbidden…”( March 6, 1959; AAS 51-271)

After Pope John XXIII’s suppression, deliberate mistranslations began to be circulated that “oecumenized” the original diary [Source: Traditio Network]. The lifting of the suppression of the Divine Mercy came only after the Vatican II was fully implemented: “This Sacred Congregation, having now in possession the many original documents unknown in 1959, and having taken into account the profoundly changed circumstances, and having taken into account the opinion of many Polish Ordinaries, declares no longer binding the prohibitions contained in the Notification [of 1959].”

The truth is that there are some very disturbing things in Sr Faustina’s diary and this is why Pope Pius XII found so erroneous as to have been placed on the banned publication list. John XXIII placed the Divine Mercy and it’s image on the same list and ordered the removal of the image from all parishes.

It seems that Our Lord’s words are such as to instill pride in Sr Faustina which is a flaw we are admonished to avoid. The following are excerpts from Sr Faustina diary:

On page 176, “Jesus” says to her: “You are a sweet grape and a chosen cluster; I want others to have a share in the juice that is flowing within you.”

On page 247, “Jesus” says: “And know this, too, my daughter: All creatures, whether they know it or not, and whether they want to or not, always fulfill my will… My daughter, if you wish, I will this instant create a new world, more beautiful than this one, and you will live there for the rest of your life.”

On page 260, “Jesus” says: “For many souls will turn back from the gates of Hell and worship My mercy.”

On page 374, “Jesus” says: “If they will not adore My mercy, they will perish for all eternity.”

On page 288, “Jesus” says: “That is why I am uniting myself with you so intimately as with no other creature.”

On page 400, “Jesus” says: “I see your love so pure, purer than that of the angels, and all the more so because you keep fighting. For your sake I bless the world.”

On page 417, we read that “Jesus” supposedly gave Sr. Faustina this instruction: “Tell the Superior General to count on you as the most faithful daughter in the Order.”

On page 583, we read that Sr. Faustina said: “When I took the Messenger of the Sacred Heart into my hand and read the account of the canonization of St. Andrew Bobola, my soul was instantly filled with a great longing that our congregation, too, might have a saint and I wept like a child that there was no saint in our midst. And I said to the Lord, ‘I know your generosity, and yet it seems to me that you are less generous towards us.’ And I began again to weep like a little child. And the Lord Jesus said to me, ‘Don’t cry. You are that saint.’ ”

On page 612: “Jesus” supposedly said: “I bear a special love for Poland, and if she will be obedient to My will, I will exalt her in might and holiness. From her will come forth the spark that will prepare the world for My final coming.”

On page 643, we read that Sr. Faustina said after receiving Communion: “Jesus transform me into another host!…. You are a great and all-powerful Lord; you can grant me this favor. And the Lord answered me, ‘You are a living host.’ ”

Divine Mercy is flawed to ask for mercy when evidently we are receiving it now and justice will most assuredly follow according to the innocent blood spilled, the Catholics who have hardened their hearts and disobedience in not doing what we have been told to do. Mercy, as the divine mother said, is promised to those who fear, and not to those who insult the Lord. “And His mercy to them that fear Him” (Luke i 50).

Since 2000 the Second Sunday of Easter is also called Divine Mercy Sunday. However, an Octave Day of a feast, particularly of the greatest feast, Easter, is a significant day in itself.  The Divine Mercy cult is thus in contravention of the focus of the Catholic liturgy for that day, which is on the Resurrection of Our Lord and faith in His Divinity.

As Dom Gueranger, the noted Benedictine liturgical scholar, commented in his fifteen-volume Liturgical Year: “Such is the solemnity of this Sunday that not only is it of greater double rite, but no feast, however great, can ever be kept upon it.” That is the Roman Catholic attitude, which the New Order has spurned.

What are we to think of the Divine Mercy Devotion?

FSSPX has written an excellent article: ‘What Are We To Think of The Divine Mercy Devotion?’ It was printed in ‘The Angelus‘. Here are some excerpts:

“What was it about this devotion that prevented the Holy Office from acknowledging its divine origin? The decrees do not say, but it seems that the reason lies in the fact that there is so much emphasis on God’s mercy as to exclude His justice. Our sins and the gravity of the offense that they inflict on God is pushed aside as being of little consequence. That is why the aspect of reparation for sin is omitted or obscured.”

“The true image of God’s mercy is the Sacred Heart of Jesus, pierced with a lance, crowned with thorns, dripping precious blood. The Sacred Heart calls for a devotion of reparation, as the popes have always requested. However, this is not the case with the Divine Mercy devotion. The image has no heart. It is a Sacred Heart without a heart, without reparation, without the price of our sins being clearly evident.”

Divine Mercy: A Catholic devotion and its Novus Ordo Counterfeit