This monumental liturgical work, comprising fifteen volumes, was the life-long labor of Benedictine Abbot Dom Guéranger. Written with the heart of a seraphic contemplative, the holy abbot takes the reader on a daily spiritual pilgrimage through the liturgies of both the East and the West as he immerses the soul into the very life of the ecclesia orans et adorans (the church praying and adoring).

The Liturgical Year to be read and studied for a lifetime. Even a once through reading will immeasurably increase your knowledge and love of the history and true liturgical life of the Church.  Dom Guéranger, abbot of Solesmes from 1837-1875, was one of the leading monastics and liturgists of his generation, and his writings were highly influential both in France and abroad. Dom Prosper Guéranger, O.S.B. Abbot of Solesmes.

This monumental liturgical work, comprising fifteen volumes, was the life-long labor of Benedictine Abbot Dom Guéranger. Written with the heart of a seraphic contemplative, the holy abbot takes the reader on a daily spiritual pilgrimage through the liturgies of both the East and the West as he immerses the soul into the very life of the ecclesia orans et adorans (the church praying and adoring). The author achieves this by providing daily entries corresponding to the yearly cycle of the Church’s worship in both her divine seasonal feasts and those of her saints. Each day begins with a rich and provocative meditation on the mystery of faith to be celebrated together with the ecclesial history of the same; this is followed by excerpts from the Roman Missal’s Mass of the day (complete with Propers, i.e., Introits, Collects, Offertory prayers, etc ) as well a host of exquisite hymns from the divine office which are coupled with varied and sundry sequences garnered from other ancient Catholic rites.

The temporal and geographical universality of the Church is thusly honored; and the oneness of faith amply manifested in light of the axiomatic criterion: Lex orandi est lex credendi (the law of praying is the law of believing). If the essence of the Holy Mass is God, the Incarnate Victim, offering Himself to God, then the liturgy of the Mass is man, in union with Jesus Christ (per ipsum, et cum ipso, et in ipso), offering God to God. Truly, here is a priceless treasure awaiting your holy exploitation. Such was the strategy employed by the father of Saint Therese of Lisieux who made it a daily routine in the Martin home to read to his five daughters from these very volumes.

A personal friend of Louis Veuillot, Cardinal Pie, and Pope Pius IX and staunch defender of the Papacy as well as the Roman Liturgy, Dom Gueranger has written a work that some have called the Summa of the liturgy. Essential for every Catholic who loves the ancient liturgy and the life of prayer.

Pope Pius IX, in his eulogy of Dom Gueranger, credited him with three great accomplishments: the revival of the monastic tradition in France, restoration of the Roman Liturgy and Gregorian Chant, and the theological justification for two dogmatic definitions, that of the Immaculate Conception and the infallibility of the Roman Pontiff.

-Propers in Latin and English for every day of the liturgical year (temporal cycle and sanctoral cycle)
-Assorted Propers and Hymns from liturgies of non-Roman Rites (Byzantine, Chaldean, Maronite, Mozarabic, Ambrosian, etc)
-Propers of Sunday Vespers
-Propers of First and Second Vespers for Feast Days
-Thorough commentary on all of this
-Introductions to each season of the liturgical year
-Appropriate morning and evening prayers for each season
-The best ways to hear Mass during each season
-The best dispositions of soul for receiving Holy Communion in each season and much, much more!

If you want to understand from the heart what has happened in the Church over the last fifty years, you only need read The Liturgical Year.

Volume X: Time After Pentecost I 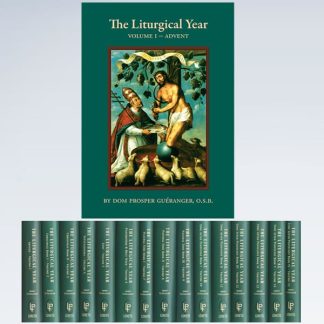