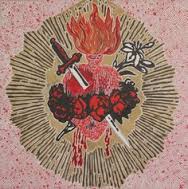 The Sacred Heart, a Devotion to the Heart of Jesus, is a way of representing, invoking and adoring the Love with which Christ loves His Father and loves us all. Although its origins go back to the Middle Ages and even before, it really began in the Seventeenth Century when Jesus appeared to the French sister Marguerite Marie Alacoque in a series of apparitions. He said to her, “Behold the Heart that has so loved men,” and showed her His Heart, pierced on the side, enthroned by flames, surrounded by the crown of thorns and surmounted by the cross.

The devotion was approved by the Papacy in 1765 and in 1899, Pope Leo XIII consecrated the whole world to the Sacred Heart.

“Devotion to the Sacred Heart of Jesus, of its very nature, is a worship of the love with which God, through Jesus, loved us…” – Pope Pius XII, Haurietis Aquas, 107.

The Prophets And Our Times

There is evidence that it was the will of Our Divine Lord that Devotion to the Sacred Heart be reserved for the last ages of the world, so that, in the last great struggle between Himself and Satan, the souls that He loves so dearly may be drawn to Him with renewed warmth, and thus strengthened against the final desperate attacks of the enemy.

In the times preceding the end of the world, Satan and his cohorts were to be loosed upon the earth in a mighty effort to draw as many souls as possible away from God, before the power of Hell would be remarkably restricted, if not completely broken. Satan’s mission is one of hate. God wins souls through love. Our Blessed Savior knew that the hatred which would be rampant in those evil days could be best conquered by a devotion which would inspire love and charity in the hearts of men. It was to serve, as it were, as a magnet and a bulwark of strength by giving men a clearer knowledge of God’s deep and abiding love and mercy. It would provide a harbor of peace and security in those days of confusion and anguish, when men’s souls would be tried almost beyond endurance.

In all times of great distress or danger, God has provided men with the means of conquering evil, as evidenced by the history of the world, both before the time of Christ, but especially since the Redemption. To mention just one of the instances of Divine intervention when a special devotion was given to the world at a crucial period, let us consider the Rosary. In the 13th century when the Albigenses were preaching their vicious doctrines against marriage, and the spread of this heresy seriously endangered the morals of the people, St. Dominic began preaching against them. He had but little success until Our Blessed Lady appeared to him and told him to encourage devotion to the Rosary. This was done and the heresy quickly disappeared.

St. Gertrude, in the 14th century, who often conversed with the Beloved Disciple St. John, on one occasion asked him why he, who loved our Blessed Lord so fervently, had never written anything about the love of the Sacred Heart of Jesus. He explained to her his mission was to expound the Doctrine of the Incarnation and that as for the Love of the Incarnate Word as exemplified by His Divine Heart, it was reserved for the last ages to make it known, “so that the world, carried away by follies, may regain a little of the warmth of early Christian charity by learning of the love of the Sacred Heart.”

It was on the feast of St. John the Evangelist, three centuries later in 1647, that Our Lord appeared to St. Margaret Mary Alacoque and made certain promises to those who had a special devotion to His Sacred Heart, which promises were destined to become the means of salvation to so many countless Christians. Regarding this vision, the Saint explained, “I understand that this devotion to the Sacred Heart was a last effort of His love towards Christians of these latter times, by proposing to them an object and a means so calculated to persuade them to love Him.”

In 1815 Mother Maria Rafols wrote concerning her own visions at the urgent insistence of Our Blessed Lord, in the hope that many, after reading what He told her, would turn from their evil ways, and have recourse to His Merciful Heart.

Much of what she has written is prophetic, and concerns itself, in part, with the destiny of Spain. Referring to her own Mother House at Saragoza, Spain, Mother Rafols wrote that the Sacred Heart would perform such wonders there as to win many sinners away from their corrupted lives. It is worthy of note that although the Communists laid siege to the city of Saragoza, it was never captured, as foretold by Mother Rafols.

Our Lord promised her that no matter what means men might invent to destroy the faith in Spain, they would be unsuccessful and that He would reign there until the end of time, because of the love of the just and chaste souls who would always live in Spain. This prophecy, only recently unearthed, must have been of great comfort to the good Christians during the trying days of the Civil War.

So forgotten would be the Word of God in the days to come, that men would even scandalize and pervert innocent children, and endeavor to obliterate His Blessed Name from their memory. This was true in Spain, and is true in many other countries today.

There would be such moral corruption, not only in Spain, but in the entire world, that God would be forced to destroy entire cities, should they fail to reform, after His call. This is already being fulfilled and no doubt vastly greater destruction will befall the world before God is appeased.

It was written that these things would be taking place when the documents would be found. They were found in 1931. Our Lord further told Mother Rafols that there is one thing that hurts His Sacred Heart still more, and that is to be forgotten, offended and despised by souls consecrated to Him. They sometimes forget how dearly He loves His chosen ones, how eagerly He waits in the Tabernacle for them to come to Him for inspiration and assistance in the great mission of saving souls. He wants them to be humble and chaste, and to practice true charity towards one another, and thus, avoid giving scandal. He desires that His priests be living models of Himself and that they propagate devotion to His Sacred Heart.

He wishes that all men have greater love for one another so that there can be peace on earth, and greater love for Him. The Sacred Heart was very sad because of the sacrileges men would commit on account of their coldness toward Him. He said that many would not only not heed the commands of Holy Mother Church, but would actually persecute Her and seek to destroy Her. Priests and religious would be treated with great disrespect.

To those who devoutly wear the image of His Sacred Heart (i.e. a Jesus Scapular Medal), He promised great graces and special protection at the hour of their death. He said that in times to come, many souls would propagate the devotion to His Sacred Heart.

Since these three holy women connect this devotion with the latter days it seems significant that its spread is quite modern. It was not extended to the entire world until 1856 by Blessed Pope Pius IX; the whole human race was commended to the Sacred Heart by Leo XIII only in 1899; and a special act of consecration was prescribed by Pope Pius XI in 1929 to be recited throughout the entire world on the Feast of Christ the King.

In conclusion, we may note that the prayers ordered by Pope Leo XIII to be said after Low Mass to “restrain” Satan are followed by the threefold repetition of the invocation to invoke the aid of the Sacred Heart for this purpose: “Most Sacred Heart of Jesus, have mercy on us!”

Prayer to St. Michael the Archangel

St. Michael the Archangel,
defend us in the day of battle;
Be our safeguard against the
wickedness and snares of the devil.
May God rebuke him,
we humbly pray,
And do thou,
O prince of the heavenly host,
by the power of God,
Cast into hell,
Satan and all the other evil spirits,
who prowl through the world,
seeking the ruin of souls.
Amen.

Mary, Queen of All Saints, pray for us!

(This powerful prayer of exorcism was composed by Pope Leo XIII; in a vision, he had been shown the fearful battle to be waged between Satan and St. Michael, over the Church of the future. Now, as never before, the Church needs the intercession of St. Michael! Please say this prayer every day.)

Prayers to the Sacred Heart of Jesus

O most holy Heart of Jesus, the fountain of every blessing, I adore Thee, I love Thee and with a lively sorrow for my sins, I offer Thee this poor heart of mine. Make me humble, patient, pure, and wholly obedient to Thy will. Grant, good Jesus, that I may live in Thee and for Thee. Protect me in the midst of danger; comfort me in my afflictions; give me health of body, assistance in my temporal needs, Thy blessing on all that I do, and the grace of a holy death. Within Thy Heart, I place my every care. In every need let me come to Thee with humble trust saying, Heart of Jesus help me.

Invocations to the Sacred Heart

Merciful Jesus, I consecrate myself today and always to Thy Most Sacred Heart.

Most Sacred Heart of Jesus I implore, that I may ever love Thee more and more.

Most Sacred Heart of Jesus, I trust in Thee.

Most Sacred Heart of Jesus, have mercy on us!

Sacred Heart of Jesus, I believe in Thy love for me.Jesus, meek and humble of heart, make my heart like unto Thine.

Most Sacred Heart of Jesus, convert sinners, save the dying, deliver the Holy Souls in Purgatory.

Category: Prayers and Devotions
Tag: The Prophets And Our Times
Our Lady’s Rosary Maker and Traditional Catholic Resource