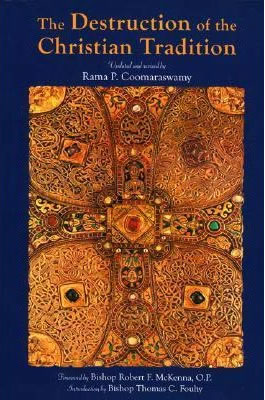 Concentrating on the post-Vatican II revisions of its teachings, this book tells the story of the destruction of the Roman Catholic tradition, a defining event of the twentieth century.

“The Apostle Paul in his Epistle to the Ephesians orders us to expose the unfruitful works of darkness. In The Destruction of the Christian Tradition, Dr. Coomaraswamy does just that clearly, decisively, brilliantly and, I dare say, inspiringly; for against the ugly backdrop of the new religion, one is shocked into a greater realization of the beauty of the true Religion. The good doctor demonstrates in a compelling way that ours is a Catholic heritage that is truly precious. This book deserves to be disseminated far and wide.” —Rev. Father Clarence J. Kelly, Superior, Eastern Division (U.S.A.), Society of Pius X

In this book, Father Coomaraswamy starts out discussing the natures of the Magisterium and papal infallibility, proceeds to the intentional post-Vatican II marrings and mistranslations of Scripture, then examines the historical teachings of the Church on what happens when a Pope becomes a public heretic destructive of the Faith. “There can be no doubt that the post-Conciliar ‘Popes’ have rejected the authority of the Magisterium and would lead us to do the same. They have thus lost their authority because it cannot be said of them that he who hears them is hearing Christ” (p. 43).

“Men have rebelled against that Christianity which is true and faithful to Christ and His doctrines. In its place they have fashioned Christianity to their own liking, a new idol which does not save, which is not opposed to the passions of carnal desires nor to the greed of gold and silver which fascinates, nor to the pride of Life; a new religion without a soul, without religion, a mask of dead Christianity without the spirit of Christ” (Pope Pius XII, quoted on p. 384).

Father Coomaraswamy argues convincingly that if you accept the Council of Trent and the First Vatican Council you cannot accept – it is *logically impossible* to accept – Vatican II and the “New Church”.

“Many American Catholics over 30 remember living in that history-heavy church as if living in a spiritual fortress—comforting at times, inhibiting and even terrifying at others. But it was a safe and ordered universe with eternal guarantees for those who lived by its rules. THAT FORTRESS HAS CRUMBLED.” TIME Magazine, May 1976.

RECENT events within the Catholic Church have clearly resulted in great confusion, and if this ancient structure can no longer stand as a monolith in which each component part speaks “with one voice”, there is little doubt but that the various factions that claim Catholicity would agree in stating that something is seriously wrong. In America alone, some ten thousand priests and thirty-five thousand nuns have abandoned their religious vocations. Annulments (referred to by some as “Catholic divorces”) are approximating the level of ten thousand a year. Weekly Mass attendance has dropped to well below the fifty percent level and monthly confession below the seventeen percent mark. The priesthood is no longer attracting youth in its ranks and many seminaries have been closed. Conversions which once approached the level of almost two hundred thousand a year in the United States are now virtually at a standstill. According to the “Boystown Project” from the Catholic University of America, “nearly seven million young people from Catholic backgrounds no longer identify themselves with the Church” (National Catholic Register, March 27th 1977). What is perhaps of even greater importance is that those who continue to call themselves “Catholic”, are by no means unanimous as to what this term means. As Archbishop Joseph L. Bernadin, president of the U.S. Bishop’s Conference has noted, “many consider themselves good Catholics, even though their beliefs and practices seem to conflict with the official teaching of the Church” (Time, May 24th 1976). This man speaks with both personal experience and authority, for he has also stated that it was his “belief that it was legitimate for theologians to speculate about the removal of doctrines that have already been defined, and to request the magisterium to remove such doctrines from the content of the Faith” (The Wanderer, St. Paul, Minn., June 17th 1976).

There are of course those who see in all this only signs of hope and “progress”. They claim that those who have left are “deadwood”, and that the Church is better off without them. They compare the Church to a grain of wheat that must die and be born again; that the Angst and chaos are essential if the Church is going to have “relevance” for modern man; that all that is happening is under the guidance of the “Holy Spirit” which desires to have the Church “adapt” herself to what is euphemistically called “the times.” Having previously claimed that the changes were necessary “to bring the masses back to the Church”, they now proclaim that they “are not interested in the numbers game”. Others view the situation in a quite different light. They see in all the changes not so much an “adaption” as a “capitulation”; they do not see the world becoming Christianized, but rather, a Church becoming secularized; they ‘do not see the “vines” as being pruned so much as their being uprooted and destroyed. They see the present situation as one that St. Paul predicted as preceding the coming of the Antichrist—”for that Day shall not come, except there come a falling away first” (2 Thes. 2:3). They liken the present situation to that described and prefigured in Maccabees:

In those days went there out of Israel wicked men, who persuaded many, saying, Let us go and make a covenant with the heathens that are round about us; for since we departed from them, we have had much sorrow. Then certain of the people were so forward herein, that they went to the King, who gave them licence to do after the ordinances of the heathen… (and they) made themselves uncircumcised, and forsook the holy covenant, and joined themselves to the heathen…

The great majority, however, remain bewildered and confused. Bred in an atmosphere which led them to accept with trust whatever came to them from their clergy, they tend to find excuses for all they do not understand. Like Paul VI, some admit that “the smoke of Satan has entered into the Church”; they, however, refuse to look for the source of the fire.

Now, whatever the causes of the present situation may be, it is certain that prominent among them must be the changes that have occurred within the Church itself. These are clearly identified as those affecting the Liturgy (and especially the Mass), and the teachings (or as they are called, the “new directions”) that have resulted from the Second Vatican Council and the “Post-conciliar” Popes. The present study will attempt to discuss in some depth the nature of these changes and their implications.

Before doing so, however, certain principles have to be understood that relate to the fundamental nature of the Church, her authority to “teach”, and the manner in which she does so. Those who still believe in the possibility that God in His Mercy gave us a Revelation, will have no difficulty in accepting these concepts. Others who cannot, or will not accept such a premise, must, if they wish to understand what is happening to this Church, at least concede the existence of this premise, for if there is no Revelation, there is no Church. With this in mind we shall initiate our text with a study of the nature of the Church’s teaching function. From there we will proceed to consider the sources of the Church’s teaching and the manner in which they are conveyed to the faithful. It will be in the light of these basic facts that we then proceed to examine Vatican II, with its “new directions”, and the liturgical changes that followed in rapid sequence.

It is hoped that as a result of this approach, even those who do not agree with the author’s stance will come to see what even Louis Bouyer has called “The Decomposition of Catholicism” is all about. As St. Gregory of Tours said, “Let no one who reads my words doubt but that I am a Catholic.” Despite the fact that under normal circumstances it would be redundant, I must qualify this further by stating that my stand is that of a “traditional Catholic”, (Is there any other kind?) and not that of a “liberal,” “modernist”, or “Post-conciliar” one. To paraphrase the Abbe Gueranger, the reader should clearly understand that I am in no way trying to propagate any personal views of my own. I am only attempting to state the traditional Church’s teaching as it has always been (in saecula saeculorum), and to show wherein the New Church has departed from this. If the reader does not happen to like what the Church has always taught, that is too bad. He will, however, never understand the present situation unless he recognizes that, as Louis Evely has said:

The present crisis of the Church consists in its division between two irreconcilable groups: the ‘old ones’, who cannot or will not admit liturgical disciplinary and conceptual changes; and ‘the young ones’ who are repelled by the old ceremonies, beliefs, and practices. It is impossible to speak to both groups at once. Every priest today finds that his parish is really two parishes. What awakens faith, or at least stirs interest among young people, scandalizes their elders to the point that they lose what little faith they have left. And to lead older people from the traditional faith to one which is more personal requires so much time, so much patience and so many precautions that the young people have not the patience to listen to, let alone read anything about it (they read so little of anything, for that matter). [If the Church is to Survive.]

The reader is further assured that in the exposition of the teachings of the traditional Church, wherever direct quotation is not given, the statements have been checked and approved by competent authority.

Download The Destruction of the Christian Tradition by Rama P. Coomaraswamy

CONTENTS
Publisher’s Note vii
Foreword by Bishop Robert F. McKenna, O.P. ix
Preface to the Second Edition by Rama P. Coomaraswamy xi
Introduction by Bishop Thomas C. Fouhy xiii
1. The Problem: Is it the Same Church? 1
2. The Magisterium of the Church and Related Issues 10
3. The Nature of Revelation—Scripture 45
4. Just What Is Meant by the Word “Tradition”? 62
5. The Nature of the Catholic Faith 78
6. The Attitude of the Magisterium Towards Innovation 96
7. Can a Pope Depart From Unity of Faith and Worship? 107
8. The Problem of Obedience 120
9. The Post-Conciliar “Popes”—Part I 132
10. The Post-Conciliar “Popes”—Part II 163
11. Vatican II 184
12. The Liturgical Revolution 230
13. The Novus Ordo Missae 255
14. Orders and the Destruction of the Apostolic Succession 303
15. Communism, “Ostpolitik,” and Liberation Theology 357
16. Modernism in the Church: The Road to Hell Is Paved 384
With Good Intentions
Conclusion 406
Addendum: Benedict XVI 436
Biographical Notes