A Voice in the Wilderness: Archbishop Carlo Maria Viganò on the Church, America, and the World

A Voice in the Wilderness collects for the first time all the major writings of Archbishop Viganò from August 2018 to January 2021, with explanatory introductions and notes by Brian M. McCall.  Paperback ‏ : ‎ 442 pages.

Send Inquiry for A Voice in the Wilderness: Archbishop Carlo Maria Viganò on the Church, America, and the World

A Voice in the Wilderness collects for the first time all the major writings of Archbishop Viganò from August 2018 to January 2021, with explanatory introductions and notes by Brian M. McCall. Finally available in one place to allow for easy access, assimilation, and debate, it is the definitive edition of an extraordinary body of pronouncements that have stirred up vehement controversy on all sides. Regardless where one stands in its regard, Viganò’s arresting message cannot be ignored. Ultimately, it is one of conversion to Christ the King, the Truth in person, who sets us free from the accumulating slaveries of our time.

“To restore the beauty of holiness to the face of the Bride of Christ, which is terribly disfigured by so many abominable crimes, and if we truly want to free the Church from the fetid swamp into which she has fallen, we must have the courage to tear down the culture of secrecy and publicly confess the truths we have kept hidden.”

These bold words from the pen of an archbishop in exile—part of a bombshell exposé published in August 2018 concerning Theodore McCarrick and his circle—catapulted the ecclesiastical diplomat Carlo Maria Viganò to international prominence. In a steady stream of interventions from that time onward, Archbishop Viganò has not only supplied further incriminating details on the current Vatican regime but has extended his critique to the neo-modernism and worldly accommodation that officially entered the Church through the Second Vatican Council. He argues, moreover, that just as there is a “deep state” of wealthy and powerful international elites who exercise enormous sway over political affairs and cultural vectors, so too there is a “deep church” that retains for its advantage the external trappings of religion while pursuing an agenda of error and moral corruption. These pseudo-sovereignties closely collaborate as they work for the same goals, which are, at this point, an open secret.

A Voice in the Wilderness: Archbishop Carlo Maria Viganò on the Church, America, and the World
About the Authors

ARCHBISHOP CARLO MARIA VIGANÒ was born on January 16, 1941 in Varese, Italy. He was ordained a priest on March 24, 1968 and incardinated in the Diocese of Pavia (Italy). He has a doctorate in both canon and civil law (utroque iure). His Excellency started his service in the Diplomatic Corps of the Holy See as Attaché in 1973 in Iraq and Kuwait. In 1976 he was transferred to the Apostolic Nunciature in Great Britain, and from 1978 until 1989 worked at the Secretariat of State of Vatican City. On April 4, 1989 he was nominated Special Envoy with the functions of Permanent Observer to the European Council in Strasbourg. He was consecrated an archbishop on April 26, 1992 and made Titular Archbishop of Ulpiana. He was nominated Apostolic Pro-Nuncio in Nigeria, on April 3, 1992. On April 4, 1998 he was nominated Delegate for the Pontifical Representations. Archbishop Viganò served as Secretary General of the Governorate of the Vatican City State from July 16, 2009 until September 3, 2011. On October 19, 2011 Pope Benedict XVI appointed him Apostolic Nuncio to the United States, a post he held until his retirement in April of  2016. He speaks Italian, French, Spanish and English.

BRIAN M. MCCALL holds the Orpha and Maurice Merrill Chair in Law at the University of Oklahoma College of Law. With degrees from Yale, University of Pennsylvania, and Kings College University of London, he is the author of five other books—Contracts: Modern Pacts (Kindle, 2019); The Architecture of Law (Notre Dame University Press, 2018); La Corporación como Sociedad Imperfecta (Marcial Pons, 2015); To Build the City of God: Living as Catholics in a Secular Age (Angelico Press, 2014); and The Church and the Usurers: Unprofitable Lending for the Modern Economy (Sapientia Press of Ave Maria University, 2013)—and dozens of articles. He has served as Editor-in-Chief of Catholic Family News since 2018. He and his wife, Marie Elaina, have six children. 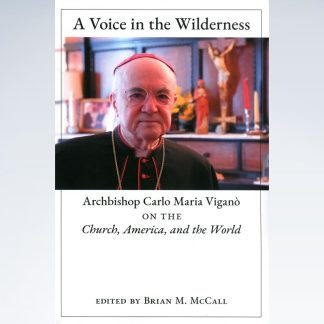 You're viewing: A Voice in the Wilderness: Archbishop Carlo Maria Viganò on the Church, America, and the World US$ 24.95
Add to cart