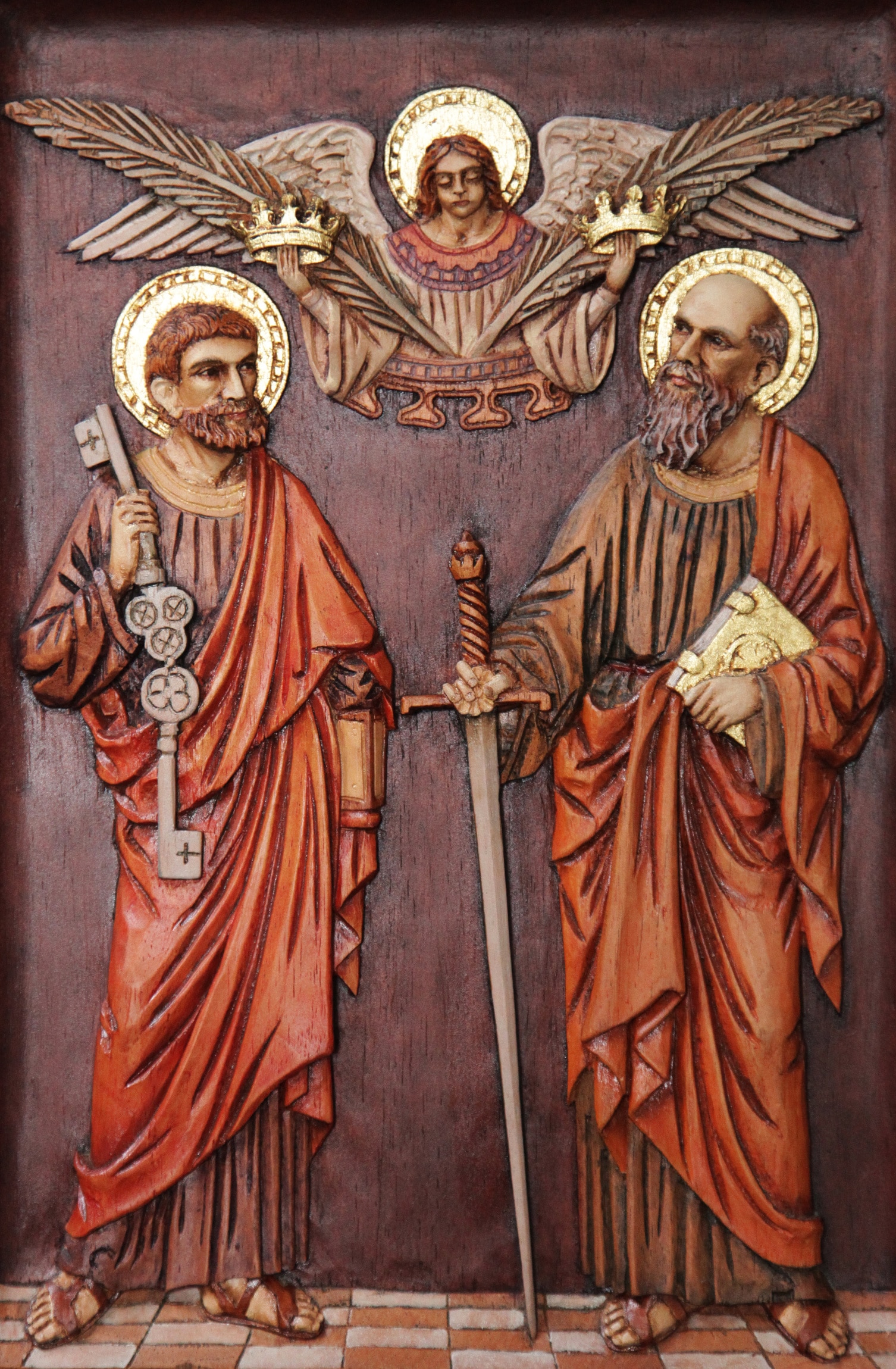 To His Holiness POPE JOHN PAUL II Bishop of Rome and Vicar of Jesus Christ, Successor of St. Peter, Prince of the Apostles, Supreme Pontiff of the Universal Church, Patriarch of the West, Primate of Italy, Archbishop and Metropolitan of the Roman Province, Sovereign of Vatican City.

On the tenth anniversary of the consecration of the four Catholic bishops by His Grace Archbishop Marcel Lefebvre for the survival of the Catholic Faith, by the grace of God, I declare that I am Roman Catholic. My religion was founded by Jesus Christ when he said to Peter:

Holy Father, my Credo is the Apostles’ Creed. The deposit of Faith came from Jesus Christ and was completed at the death of the last Apostle. It was entrusted to the Roman Catholic Church to serve as a guide for the salvation of souls to the end of time.

Holy Father, it seems that St. Paul is telling me:

“Keep the deposit… the deposit that is entrusted to you, not discovered by you. You received it: you did not draw it from your resources. It is not the fruit of any personal understanding but of teaching. It is not personal use, but it belongs to public tradition. It does not come from you, but it has come to you. With respect to it, you cannot act as an author, but only a simple keeper. You are not its initiator but its disciple. It is not for you to direct it, but your duty to follow it.” (St. Vincent of Lerins, Commonitorium, No. 21).

The Holy Council of Vatican I teaches that

“the doctrine of Faith that God has revealed, was not proposed to the minds of men as a philosophical discovery to be perfected, but as the divine deposit, entrusted to the Spouse of Christ that she might faithfully keep it and infallibly define it. Consequently, the meaning of the Sacred Dogmas which must always be preserved is that which our Holy Mother the Church has determined. Never is it permissible to depart from this in the name of a deeper understanding.” (Dogmatic Constitution Dei Filius, Dz. 1800).

“The Holy Ghost was promised to the successors of Peter, not that they might make known new doctrine by His Revelation but rather that, with His assistance, they mighty religiously guard and faithfully explain the Revelation or deposit of Faith that was handed down through the Apostles.” (Vatican I, Dogmatic Constitution Pastor Æternus Dz. 1836)

Moreover, “the power of the pope is not unlimited; not only can he not change anything which is of divine institution (to suppress episcopal jurisdiction, for instance), but he is to build and not to destroy (cf. II Cor. 10, 8); he is enjoined, through natural law, not to sow confusion in the flock of Christ” (Dict. De Théol. Cath., II, col. 2039-2040).

St. Paul too confirmed the Faith of his converts: “But though we or an angel from heaven preach a Gospel to you besides that which we have preached to you, let him be anathema.” (Gal. 1:8)

Holy Father, in 1969, a communication from Rome was received in San Fernando Diocese of La Union. It said the Tridentine Latin Mass was to be suppressed and the Novus Ordo Missae was to be implemented. There was no reason given. Since the order came from Rome it was obeyed without any protest (Roma locuta est, causa finita est).

I retired in 1993, 23 years after my episcopal consecration. Since my retirement, I discovered the real reason for the illegal suppression of the traditional Latin Mass. The ancient Mass was an obstacle to the introduction of ecumenism. The Catholic Mass contained Catholic dogmas, which Protestants denied. To achieve unity with Protestant sects, the Tridentine Latin Mass had to be scrapped, being replaced by the Novus Ordo Missae.

The Novus Ordo Missae was a concoction of Monsignor Annibale Bugnini, a freemason. Six Protestant ministers helped Monsignor Bugnini in fabricating it. The innovators saw to it that no Catholic dogmas fully and replaced them with very ambiguous Protestantizing and heretical things. They even changed the form of the consecration given by Jesus Christ. With these modifications, the new rite of the Mass became more Protestant than Catholic.

The Protestants maintain that the Mass is a mere meal, a mere communion, a mere banquet, a memorial. The Council of Trent emphasized the reality of the sacrifice of the Mass, which is an unbloody renewal of the bloody sacrifice of Christ on Mount Calvary. “He, therefore, our god and Lord, though He was about to offer Himself once to God the Father upon the altar of the Cross… offered to God the Father His own body and blood under the species of bread and wine… at the last supper on the night He was betrayed, so that He might leave to His beloved Spouse the Church a visible sacrifice (as nature of man demands), whereby that bloody sacrifice once to be completed on the Cross might be represented…” (Dz 938). The Mass is also as a consequence a communion to the sacrifice previously celebrated: a banquet where one eats the immolated Victim of the sacrifice. But if there is no sacrifice there is no communion with it. Mass is first and foremost a sacrifice and secondly a communion or a meal.

It is also noted that in the Novus Ordo Missae, Christ’s Real Eucharistic Presence is implicitly denied. The same observation is also true concerning the Church’s doctrine of Transubstantiation.

Connected with this, in the Novus Ordo Missae, the priest has been demoted from a priest who offers a sacrifice to one who merely presides over the assembly. Now he is the president of the assembly. For this role he faces the people. In the Traditional Mass, the priest, on the contrary, faces the tabernacle and the altar where Christ is.

After having known those mutations, I decided to stop saying the New Rite of Mass, which I was saying for more than twenty-seven in obedience to ecclesiastical superiors. I returned to the Tridentine Latin Mass because it is the Mass instituted by Jesus Christ at the Last Supper which is the unbloody renewal of the bloody sacrifice of Jesus Christ on Mount Calvary. This Mass of all times has sanctified the lives of millions down the centuries.

Holy Father, with all the respect I have for you and for the Holy See of St. Peter, I cannot follow your own teaching of the “universal salvation”, it contradicts Sacred Scripture.

Holy Father, are all men going to be saved? Jesus Christ wanted all men to be redeemed. In fact, He died for us all. Still, not all men are going to be saved because not all men fulfill all the necessary conditions in order to be numbered among the elects of God in Heaven.

Before Jesus Christ ascended to Heaven, He entrusted to His Apostles the duty of preaching the Gospel to every creature. His instructions already hinted that all souls were not going to be saved. He said: “Go into the whole world, and preach the Gospel to every creature. He that believeth and is baptized shall be saved, he that believeth not shall be condemned.” (Mk. 16:15-16).

St. Paul supported this in his instruction to his converts: “Know you not that the unjust shall not possess the Kingdom of God? Do not err, neither fornicators, nor idolaters, nor adulterous, nor the effeminate, nor sodomites, nor thieves, nor covetous, nor drunkards, nor railers, nor extortioners shall possess the Kingdom of God.” (I Cor. 6:9-10)

Holy Father, should we respect false religions? Jesus Christ founded only one Church in which one can find eternal salvation. This is the Holy Roman Catholic and Apostolic Church. When He gave all the doctrines and all the truths needed to be saved Christ did not say: “Respect all false religions.” In fact, the Son of God was crucified on the cross because He did not compromise His teaching.

In 1910, in his letter “Our Apostolic Mandate“, Pope St. Pius X warned that the interdenominational spirit is part of the great movement of apostasy being organized in every country for a one world church. Pope Leo XIII warned that to “treat all religions alike… is calculated to bring about the ruin of all forms of religion, and especially of the Catholic Religion, which, as it is the only one that is true, cannot, without great injustice, be regarded as merely equal to other religions (Encyclical Humanum Genus). The process is this: FROM CATHOLICISM TO PROTESTANTISM; FROM PROTESTANTISM TO MODERNISM; FROM MODERNISM TO ATHEISM.

Ecumenism, as practiced today, flies in the face of traditional Catholic doctrine and practices. It places the one true Religion established by Our Lord on the same base level with false, man-made religions —something that popes throughout the centuries absolutely forbade Catholics to do: “It is clear that the Apostolic See can by no means take part in these (ecumenical) assemblies, nor is it in any way lawful for Catholics to give to such enterprises their encouragement or support” (Pope Pius XI, Mortalium Animos).

I am for eternal Rome, the Rome of Ss. Peter and Paul. I do not follow Masonic Rome. Pope Leo XIII condemned Freemasonry in his encyclical Humanum Genus in 1884.

Neither do I accept modernist Rome. Pope St. Pius X also condemned modernism in his encyclical Pascendi Dominici Gregis in 1907.

I do not serve the Rome that is controlled by Freemasons who are the agents of Lucifer, the Prince of devils.

But I support the Rome that leads the Catholic Church faithfully to do the will of Jesus Christ —the glorification of the most Holy and Triune God —God the Father, God the Son and God the Holy Ghost.

I consider myself fortunate because in this present crisis of the Catholic Church I received the grace to have returned to the Church that adheres to Catholic Tradition. Thank God, I am again saying the traditional Latin Mass —the Mass instituted by Jesus at the Last Supper, the Mass of my ordination.

May the Blessed Mother Mary, St. Joseph, St. Anthony, my patron saint, St. Michael and my Guardian Angel assist me to remain faithful to the Catholic Church founded by Jesus Christ for the salvation of men.

May I obtain the grace to remain and die in the bosom of the Holy Roman Catholic Apostolic Church that adheres to the ancient traditions and be always a faithful priest and bishop of Jesus Christ, the Son of God.