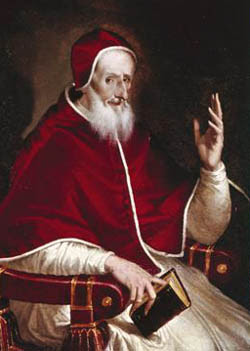 From the very first, upon Our elevation to the cheif Apostleship, We gladly turned our mind and energies and directed all out thoughts to those matters which concerned the preservation of a pure liturgy, and We strove with God’s help, by every means in our power, to accomplish this purpose. For, besides other decrees of the sacred Council of Trent, there were stipulations for Us to revise and re-edit the sacred books: the Catechism, the Missal and the Breviary. With the Catechism published for the instruction of the faithful, by God’s help, and the Breviary thoroughly revised for the worthy praise of God, in order that the Missal and Breviary may be in perfect harmony, as fitting and proper – for its most becoming that there be in the Church only one appropriate manner of reciting the Psalms and only one rite for the celebration of Mass – We deemed it necessary to give our immediate attention to what still remained to be done, viz, the re-editing of the Missal as soon as possible.

Hence, We decided to entrust this work to learned men of our selection. They very carefully collated all their work with the ancient codices in Our Vatican Library and with reliable, preserved or emended codices from elsewhere. Besides this, these men consulted the works of ancient and approved authors concerning the same sacred rites; and thus they have restored the Missal itself to the original form and rite of the holy Fathers. When this work has been gone over numerous times and further emended, after serious study and reflection, We commanded that the finished product be printed and published as soon as possible, so that all might enjoy the fruits of this labor; and thus, priests would know which prayers to use and which rites and ceremonies they were required to observe from now on in the celebration of Masses.

Let all everywhere adopt and observe what has been handed down by the Holy Roman Church, the Mother and Teacher of the other churches, and let Masses not be sung or read according to any other formula than that of this Missal published by Us. This ordinance applies henceforth, now, and forever, throughout all the provinces of the Christian world, to all patriarchs, cathedral churches, collegiate and parish churches, be they secular or religious, both of men and of women – even of military orders – and of churches or chapels without a specific congregation in which conventual Masses are sung aloud in choir or read privately in accord with the rites and customs of the Roman Church. This Missal is to be used by all churches, even by those which in their authorization are made exempt, whether by Apostolic indult, custom, or privilege, or even if by oath or official confirmation of the Holy See, or have their rights and faculties guarenteed to them by any other manner whatsoever.

This new rite alone is to be used unless approval of the practice of saying Mass differently was given at the very time of the institution and confirmation of the church by Apostolic See at least 200 years ago, or unless there has prevailed a custom of a similar kind which has been continuously followed for a period of not less than 200 years, in which most cases We in no wise rescind their above-mentioned prerogative or custom. However, if this Missal, which we have seen fit to publish, be more agreeable to these latter, We grant them permission to celebrate Mass according to its rite, provided they have the consent of their bishop or prelate or of their whole Chapter, everything else to the contrary notwithstanding. All other of the churches referred to above, however, are hereby denied the use of other missals, which are to be discontinued entirely and absolutely; whereas, by this present Constitution, which will be valid henceforth, now, and forever, We order and enjoin that nothing must be added to Our recently published Missal, nothing omitted from it, nor anything whatsoever be changed within it under the penalty of Our displeasure.

We specifically command each and every patriarch, administrator, and all other persons or whatever ecclesiastical dignity they may be, be they even cardinals of the Holy Roman Church, or possessed of any other rank or pre-eminence, and We order them in virtue of holy obedience to chant or to read the Mass according to the rite and manner and norm herewith laid down by Us and, hereafter, to discontinue and completely discard all other rubrics and rites of other missals, however ancient, which they have customarily followed; and they must not in celebrating Mass presume to introduce any ceremonies or recite any prayers other than those contained in this Missal.

Furthermore, by these presents [this law], in virtue of Our Apostolic authority, We grant and concede in perpetuity that, for the chanting or reading of the Mass in any church whatsoever, this Missal is hereafter to be followed absolutely, without any scruple of conscience or fear of incurring any penalty, judgment, or censure, and may freely and lawfully be used. Nor are superiors, administrators, canons, chaplains, and other secular priests, or religious, of whatever title designated, obliged to celebrate the Mass otherwise than as enjoined by Us. We likewise declare and ordain that no one whosoever is forced or coerced to alter this Missal, and that this present document cannot be revoked or modified, but remain always valid and retain its full force notwithstanding the previous constitutions and decrees of the Holy See, as well as any general or special constitutions or edicts of provincial or synodal councils, and notwithstanding the practice and custom of the aforesaid churches, established by long and immemorial prescription – except, however, if more than two hundred years’ standing.

It is Our will, therefore, and by the same authority, We decree that, after We publish this constitution and the edition of the Missal, the priests of the Roman Curia are, after thirty days, obliged to chant or read the Mass according to it; all others south of the Alps, after three months; and those beyond the Alps either within six months or whenever the Missal is available for sale. Wherefore, in order that the Missal be preserved incorrupt throughout the whole world and kept free of flaws and errors, the penalty for nonobservance for printers, whether mediately or immediately subject to Our dominion, and that of the Holy Roman Church, will be the forfeiting of their books and a fine of one hundred gold ducats, payable ipso facto to the Apostolic Treasury. Further, as for those located in other parts of the world, the penalty is excommunication latae sententiae, and such other penalties as may in Our judgment be imposed; and We decree by this law that they must not dare or presume either to print or to publish or to sell, or in any way to accept books of this nature without Our approval and consent, or without the express consent of the Apostolic Commissaries of those places, who will be appointed by Us. Said printer must receive a standard Missal and agree faithfully with it and in no wise vary from the Roman Missal of the large type (secundum magnum impressionem).

Accordingly, since it would be difficult for this present pronouncement to be sent to all parts of the Christian world and simultaneously come to light everywhere, We direct that it be, as usual, posted and published at the doors of the Basilica of the Prince of the Apostles, also at the Apostolic Chancery, and on the street at Campo Flora; furthermore, We direct that printed copies of this same edict signed by a notary public and made official by an ecclesiastical dignitary possess the same indubitable validity everywhere and in every nation, as if Our manuscript were shown there.

Therefore, no one whosoever is permitted to alter this notice of Our permission, statute, ordinance, command, precept, grant, indult, declaration, will, decree, and prohibition. Should know that he will incur the wrath of Almighty God and of the Blessed Apostles Peter and Paul.

Given at St. Peter’s in the year of the Lord’s Incarnation, 1570, on the 14th of July of the Fifth year of Our Pontificate