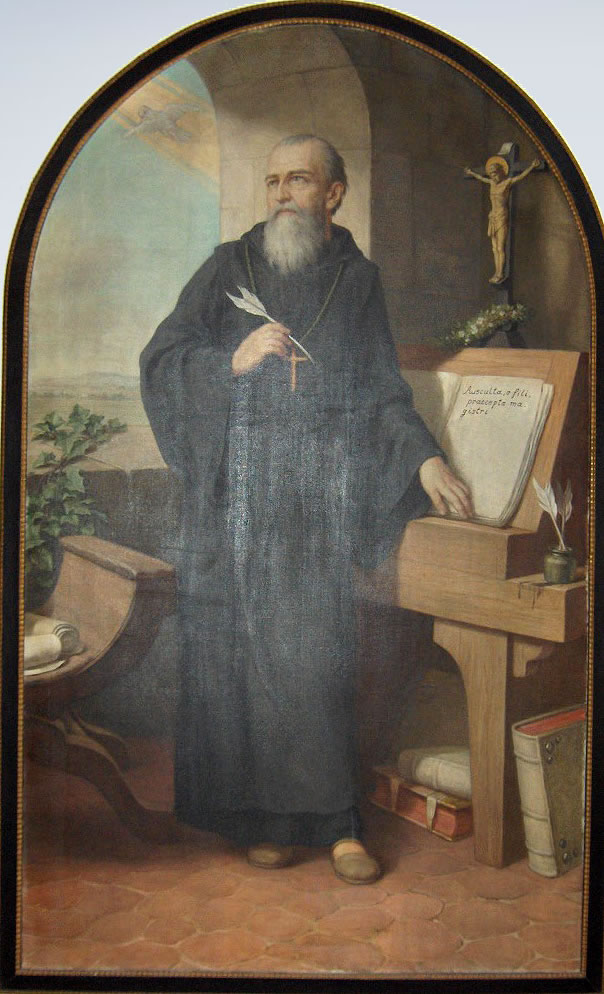 Christian monasticism is the devotional practice of individuals who live ascetic and typically cloistered lives that are dedicated to Christian worship. Monasticism became quite popular in the Middle Ages, with religion being the most important force in Europe. Monks and nuns were to live isolated from the world to become closer to God. Monks provided service to the church by copying manuscripts, creating art, educating people, and working as missionaries. Convents were especially appealing to women. It was the only place they would receive any sort of education or power. It also let them escape unwanted marriages.

Learning Objective: Compare and contrast some of the monastic orders that were formed during the Middle Ages

Monasticism in the Middle Ages

From the 6th century onward most of the monasteries in the West were of the Benedictine Order. The Benedictines were founded by Benedict of Nursia, the most influential of western monks and called “the father of western monasticism.” He was educated in Rome but soon sought the life of a hermit in a cave at Subiaco, outside the city. He then attracted followers with whom he founded the monastery of Monte Cassino, between Rome and Naples, around 520. He established the Rule, adapting in part the earlier anonymous Rule of the Master (Regula magistri), which was written somewhere south of Rome around 500, and defined the activities of the monastery, its officers, and their responsibilities.

By the 9th century, largely under the inspiration of Emperor Charlemagne, Benedict’s Rule became the basic guide for Western monasticism. Early Benedictine monasteries were relatively small and consisted of an oratory, a refectory, a dormitory, a scriptorium, guest accommodation, and out-buildings, a group of often quite separate rooms more reminiscent of a decent-sized Roman villa than a large medieval abbey. A monastery of about a dozen monks would have been normal during this period.

Medieval monastic life consisted of prayer, reading, and manual labor. Prayer was a monk’s first priority. Apart from prayer, monks performed a variety of tasks, such as preparing medicine, lettering, and reading. These monks would also work in the gardens and on the land. They might also spend time in the Cloister, a covered colonnade around a courtyard, where they would pray or read. Some monasteries held a scriptorium where monks would write or copy books. When the monks wrote, they used very neat handwriting and would draw illustrations in the books. As a part of their unique writing style, they decorated the first letter of each paragraph.

The efficiency of Benedict’s cenobitic Rule, in addition to the stability of the monasteries, made them very productive. The monasteries were the central storehouses and producers of knowledge.

The next wave of monastic reform after the Benedictines came with the Cistercian movement. The first Cistercian abbey was founded in 1098, at Cîteaux Abbey. The keynote of Cistercian life was a return to a literal observance of the Benedictine Rule, rejecting the developments of the Benedictines. The most striking feature in the reform was the return to manual labour, and especially to field work. Inspired by Bernard of Clairvaux, the primary builder of the Cistercians, the Cistercians became the main force of technological diffusion in medieval Europe. By the end of the 12th century the Cistercian houses numbered 500, and at its height in the 15th century the order claimed to have close to 750 houses. Most of these were built in wilderness areas, and played a major part in bringing such isolated parts of Europe into economic cultivation.
Mendicant Orders

During the rule of Pope Innocent III (1198–1216), two of the most famous monastic orders were founded. They were called the mendicant, or begging, orders because their members begged for the food and clothes. At their foundation these orders rejected the previously established monastic model of living in one stable, isolated community where members worked at a trade and owned property in common, including land, buildings, and other wealth. By contrast, the mendicants avoided owning property, did not work at a trade, and embraced a poor, often itinerant lifestyle. They depended for their survival on the goodwill of the people to whom they preached. They would usually travel in pairs, preaching, healing the sick, and helping the poor. Francis of Assisi founded the order of the Franciscans, who were known for their charitable work. The Dominicans, founded by Saint Dominic, focused on teaching, preaching, and suppressing heresy.

The Dominican Order came into being in the Middle Ages at a time when religion was starting to be contemplated in a new way. Men of God were no longer expected to stay behind the walls of a cloister. Instead, they traveled among the people, taking as their examples the apostles of the primitive Church. Like his contemporary, Francis, Dominic saw the need for a new type of organization, and the quick growth of the Dominicans and Franciscans during their first century of existence confirms that the orders of mendicant friars met a need.

The inspiration for the Franciscan Order came in 1209 when Francis heard a sermon on Matthew 10:9 that made such an impression on him that he decided to devote himself wholly to a life of apostolic poverty. Clad in a rough garment, barefoot, and, after the Evangelical precept, without staff or scrip, he began to preach repentance.

Francis was soon joined by a prominent fellow townsman, Bernard of Quintavalle, who contributed all that he had to the work, and by other companions, who are said to have reached eleven within a year. The brothers lived in the deserted leper colony of Rivo Torto near Assisi, but they spent much of their time traveling through the mountainous districts of Umbria, always cheerful and full of songs, yet making a deep impression on their hearers by their earnest exhortations. Their life was extremely ascetic, though such practices were apparently not prescribed by the first rule that Francis gave them (probably as early as 1209), which seems to have been nothing more than a collection of Scriptural passages emphasizing the duty of poverty.

Similar to Francis, Dominic sought to establish a new kind of order, one that would bring the dedication and systematic education of the older monastic orders like the Benedictines to bear on the religious problems of the burgeoning population of cities, but with more organizational flexibility than either monastic orders or the secular clergy. Dominic’s new order was to be a preaching order, with its members trained to preach in the vernacular languages. Rather than earning their living on vast farms as the monasteries had done, the new friars would survive by begging— “selling” themselves through persuasive preaching.

Dominic inspired his followers with loyalty to learning and virtue, a deep recognition of the spiritual power of worldly deprivation and the religious state, and a highly developed governmental structure. At the same time, Dominic encouraged the members of his order to develop a “mixed” spirituality. They were both active in preaching and contemplative in study, prayer, and meditation. The brethren of the Dominican Order were urban and learned, as well as contemplative and mystical in their spirituality. While these traits had an impact on the women of the order, the nuns especially absorbed the latter characteristics and made them their own. In England, the Dominican nuns blended these elements with their own defining characteristics and created a spirituality and collective personality that set them apart.

Related: The Mission of Monasticism in the Catholic Church

The Mission of the CONTEMPLATIVE ORDERS