The Rule of Saint Benedict

Rule of St. Benedict was written in the sixth century by the father of monastic life, St Benedict himself.  The text of this edition has been digitally reset so as faithfully to reproduce that of the 1925 edition. Binding: Leather Hardback, 4″ x 6″, 128 pages.

Send Inquiry for The Rule of Saint Benedict

Written in the sixth century, The Rule of St Benedict towers in the great tradition of Christian Monasticism. Its leading characteristics are it’s wonderful discretion, moderation, and keen insight into the capabilities and weaknesses of human nature. Here is a common sense approach to arranging life so that Christian spirituality and virtue can be lived out in any community setting.

The Rule of St. Benedict and its practice have exerted a deeper and more powerful influence on the West—and therefore on the world—than any other thing, after the Church and Her Scriptures. For it was the Benedictine monasteries that preserved islands of peaceful Christian life and learning, and saved what could be saved of Classical civilization after the fall of Rome and the coming of the barbarians; and it was the Benedictine monks—men like St. Boniface and Alcuin of York—who were the trailblazers of the new evangelisation that brought England, France and Germany into the Christian fold. Nothing could be more relevant to the times we live in than this rule of life which preserved Christian vitality in a sea of paganism and then set about transforming a savage society into a Christian culture.

So what is it about the Rule that accounts for its unique achievement? In the words of the great historian Christopher Dawson, “St. Benedict’s Rule is characterized by three qualities—its moderation, its completeness, and its insistence on the threefold duty of prayer, study, and manual work…. It is true that it is based on the denial of the three most powerful instincts that govern society—that is to say the sexual impulse, the economic impulse, and the power impulse, which are excluded by the threefold vow of Poverty, Chastity and Obedience. Yet, in spite of this radical refusal to compromise with human nature, the monastic community proved to be highly successful as an efficient social institution. In the course of time, it produced all the fruits of higher culture—art, music and learning—and passed them on through its educational activity to the society that surrounded it.

“Perhaps the most remarkable thing about the Benedictine Rule has been its extraordinary power of survival. The Benedictine form of community life has traveled down the centuries virtually unchanged, through all the vicissitudes of history, and it is still flourishing today, here in America, so that we can still find men living the same life, under the same Rule in twentieth-century America, as they did in Italy fourteen centuries ago, under the Gothic and Byzantine Emperors.”

St. Benedict was born about 480 at Nursia, the son of a Roman noble, and his boyhood was spent in Rome. He founded the famous abbey of Monte Cassino about 525, and died there in 543. It was there, too, that he wrote the Rule that eventually became the standard and pattern of monastic life throughout Western Christendom. It is surely no coincidence that St. Benedict—like that other great founder of the Middle Ages, St. Gregory the Great—was a Roman of Classical culture: the Church has always recognized the special role of Rome in Salvation History. Thus the greatest and most characteristic institution of the Middle Ages was founded in Ancient Rome.

Retreats at Benedictine monasteries and membership of the third order of St. Benedict bear witness to the fact that Benedictine spirituality has long been recognized for its value to the layman, not just the monk. And indeed, the Rule’s natural application to family life has been an exciting discovery of recent years: nor should this come as a surprise, for St. Benedict was, after all, writing “as a father to his children”. 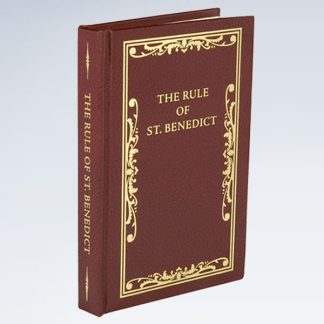 You're viewing: The Rule of Saint Benedict US$ 24.00
Add to cart