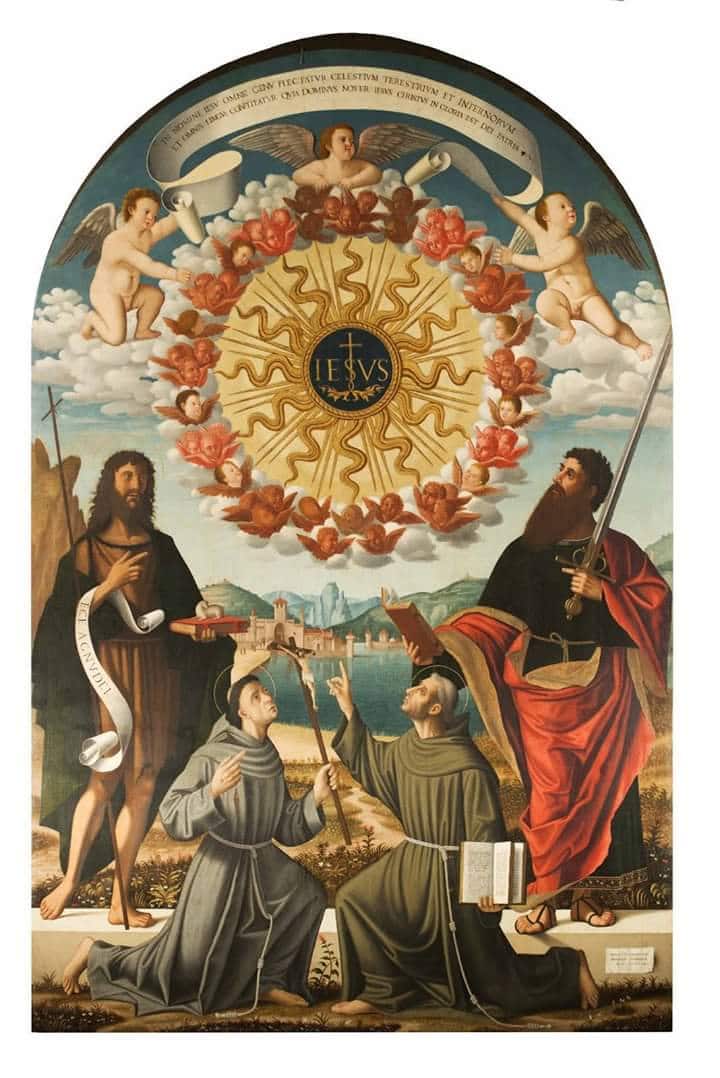 The Church is assailed by fierce enemies from within and without. The World in Danger can be saved by the Holy Name of Jesus. The Name of Jesus is the shortest, the easiest and the most powerful of prayers. Everyone can say it, even in the midst of this daily work.

The World in Danger Saved by the Holy Name of Jesus

In the year 1274 great evils threatened the world. The Church was assailed by fierce enemies from within and without. So great was the danger that the Pope, Gregory X, who then reigned, called a council of Bishops in Lyons to determine on the best means of saving society from the ruin that menaced it. Among the many means proposed, the Pope and Bishops chose what they considered the easiest and most efficacious of all, viz., the frequent repetition of the Holy Name of Jesus.

The Holy Father then begged the Bishops to call on the Name of Jesus and to urge their peoples to place all their confidence in this all-powerful Name, repeating it constantly with boundless trust. The Pope entrusted the Dominicans especially with the glorious task of preaching the wonders of the Holy Name in every country, a work they accomplished with unbounded zeal.

Their Franciscan brothers ably seconded them. St. Bernardine of Siena and St. Leonard of Port-Maurice were ardent apostles of the Name of Jesus.

Their efforts were crowned with success so that the enemies of the Church were overthrown, the dangers that threatened society disappeared and peace once more reigned supreme.

This is a most important lesson for us because, in these our own days, dreadful sufferings are crushing many countries, and still greater evils threaten all the others.

No government or governments seem strong and wise enough to stem this awful torrent of evils. There is but one remedy, and that is prayer.

Every Christian must turn to God and ask Him to have mercy on us. The easiest of all prayers, as we have seen, is the Name of Jesus.

Everyone without exception can invoke this holy name hundreds of times a day, not only for his own intentions, but also to ask God to deliver the world from impending ruin.

It is amazing what one person who prays can do to save his country and save society. We read in Holy Scripture how Moses saved by his prayer the people of Israel from destruction, and how one pious woman, Judith of Betulia, saved her city and her people when the rulers were in despair and about to surrender themselves to their enemies.

Again, we know that the two cities of Sodom and Gomorrah, which God destroyed by fire for their sins and crimes, would have been pardoned had there been only ten good men to pray for them!

Over and over again we read of kings, emperors, statesmen and famous military commanders who placed all their trust in prayer, thus working wonders. If the prayers of one man can do much, what will not the prayers of many do?

The Name of Jesus is the shortest, the easiest and the most powerful of prayers. Everyone can say it, even in the midst of this daily work. God cannot refuse to hear it.

Let us then invoke the Name of Jesus, asking Him to save us from the calamities that threaten us. According to Traditional Missal of the Roman Rite, this feast is celebrated on January 2nd. The month of January is traditionally dedicated to the Most Holy Name of Jesus.

Source: “THE WONDERS OF THE HOLY NAME” by Fr. Paul O’Sullivan.