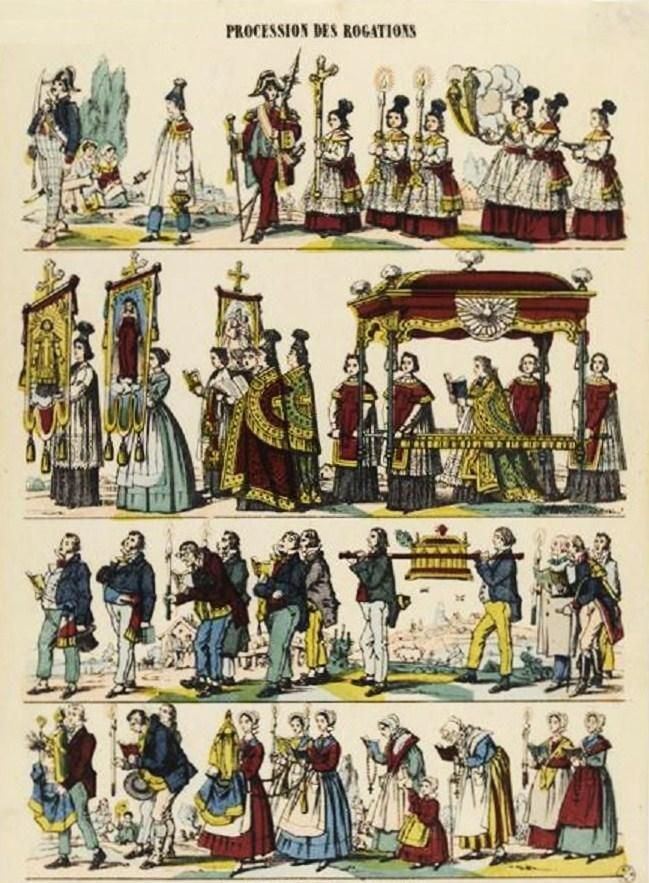 “On the twenty-fifth day of the month there is at Rome and in all the churches of God a festival that is call Litania maior, that is, the day of great prayers. On this day all godly folks whilst humbly visiting relics shall pray to God that during the year He may give them peaceful times and fair weather and sufficient crops and health of their bodies. This day the Greeks call exomologesis, that means the day of repentance and penance.” ~ Old English Martyrology.

Traditionally, on these days, the pastor and his flock to go in procession through the fields of the parish. The Litany of the Saints and the Psalms and Collects sung in procession on these days are supplications; hence the term Rogations applied to them. The object of these devotions is to appease the anger of God and avert scourges of His justice and draw down the blessings of God on the fruits of the earth.

Violet is used as a token of penance, and Pascal candles is left unlighted. The Litany of the Saints, consisting of ejaculations in the form of a dialogue, is an admirable manner of prayer which should be our prayer to cultivate.

April 25 is honored in the Liturgy by what is sometimes called Saint Mark’s Procession. The term, however, is not a correct one, inasmuch as the Procession was a privilege peculiar to April 25 previously to the institution of the Evangelist’s Feast, which even as late as the 6th century had no fixed day in the Roman Church. The real name of this Procession is The Greater Litanies. The word Litany means supplication, and is applied to the religious rite of singing certain chants whilst proceeding from place to place in order to propitiate Heaven. The two Greek words Kyrie eleison (Lord, have mercy on us) were also called Litany, as likewise were the invocations which were afterwards added to that cry for mercy, and which now form a liturgical prayer used by the Church on certain solemn occasions.

The Greater Litanies (or processions) are so called to distinguish them from the Minor Litanies (or The Lesser Litanies) [the three days preceding Ascension Thursday], that is, processions of less importance as far as the solemnity and concourse of the faithful were concerned. We gather from an expression of St. Gregory the Great that it was an ancient custom in the Roman Church to celebrate, once a year, a Greater Litany, at which all the clergy and people assisted. This holy Pontiff chose April 25 as the fixed day for this Procession, and appointed the Basilica of St. Peter as the Station.

The institution of the Greater Litanies even preceded the Processions prescribed by St. Gregory for times of public calamity, such as the one famously held to end in the plague in 591 (see Issue No. 155). It existed long before his time, and all that he did was to fix it on April 25. It is quite independent of the Feast of St. Mark, which was instituted at a much later period. If April 25 occurs during Easter week, the Procession takes place on that day (unless it be Easter Sunday) but the Feast of the Evangelist is not kept till after the Octave.

The question naturally presents itself—why did Pope St. Gregory choose April 25 for a Procession and Station in which everything reminds us of compunction and penance, and which would seem so out of keeping with the joyous Season of Easter? Liturgists have shown that in the 5th, and probably even in the 4th century, April 25 was observed at Rome as a day of great solemnity. The faithful went, on that day, to the Basilica of St. Peter, in order to celebrate the anniversary of the first entrance of the Prince of the Apostles into Rome, upon which he thus conferred the inalienable privilege of being the capital of Christendom. It is from that day that we count the 25 years, 2 months and some days that St. Peter reigned as Bishop of Rome. The Sacramentary of St. Leo gives us the Mass of this solemnity, which afterwards ceased to be kept. St. Gregory, to whom we are mainly indebted for the arrangement of the Roman Liturgy, was anxious to perpetuate the memory of a day which gave to Rome her grandest glory. He therefore ordained that the Church of St. Peter should be the Station of the Great Litany, which was always to be celebrated on that auspicious day. April 25 comes so frequently during the Octave of Easter that it could not be kept as a feast, properly so called, in honor of St. Peter’s entrance into Rome; St. Gregory, therefore, adopted the only means left of commemorating the great event.

But there was a striking contrast resulting from this institution, of which the holy Pontiff was fully aware, but which he could not avoid: it was the contrast between the joys of Paschal Time and the penitential sentiments and Station of the Great Litany. Laden as we are with the manifold graces of this holy Season, and elated with our Paschal joys, we must sober our gladness by reflecting on the motives which led the Church to cast this hour of shadow over our Easter sunshine. After all, we are sinners, with much to regret and much to fear; we have to avert those scourges which are due to the crimes of mankind; we must, by humbling ourselves and invoking the intercession of the Mother of God and the Saints, obtain the health of our bodies and preservation of the fruits of the earth; we have to offer atonement to Divine Justice for our own and the world’s pride, sinful indulgences, and insubordination. Let us enter into ourselves, and humbly confess that our own share in exciting God’s indignation is great; and our poor prayers, united with those of our Holy Mother the Church, will obtain mercy for the guilty, and for ourselves who are of their number.

A day, then, like this, of reparation to God’s offended majesty, would naturally suggest the necessity of joining some exterior penance to the interior dispositions of contrition which filled the hearts of Christians. Abstinence from flesh-meat was long observed on this day at Rome; and when the Roman Liturgy was established in the Kingdom of the Franks by King Pepin and St. Karl the Great, the Great Litany of April 25 was, of course, celebrated, and the abstinence kept by the faithful of that country. A council held at Aachen in 836 enjoined the additional obligation of resting from servile work on this day: the same enactment is found in the Capitularia of Charles the Bald. As regards fasting, properly so-called, being contrary to the spirit of Paschal Time, it appears never to have been observed on this day, at least not generally. Amalarius, who lived in the 9th century, asserts that it was not then practiced even in Rome.

During the Procession, the Litany of the Saints is sung, followed by several versicles and orations. The Mass of the Station is celebrated according to the Lenten Rite, that is, without the Gloria, and in violet vestments.

We take this opportunity of protesting against the negligence of Christians on this subject. For centuries, even many persons who had the reputation of being spiritual thought nothing of being absent from the Litanies said on the Feast of St. Mark and the Rogation Days. One would have thought that when the Holy See took from these days the obligation of abstinence, the faithful would be so much the more earnest to join in the duty left—the duty of prayer. The people’s presence at the Litanies is taken for granted; and it is simply absurd that a religious rite of public reparation should be one from which almost all should keep away. We suppose that these Christians will acknowledge the importance of the petitions made in the Litanies; but God is not obliged to hear them in favor of such as ought to make them and yet do not. When St. Charles Borromeo first took possession of the See of Milan, he found this negligence among his people, and that they left the clergy to go through the Litanies of April 25 by themselves. He assisted at them himself, and walked barefooted in the Procession. The people soon followed the saintly pastor’s example.