The Mass of All Time

The Mass of All Time is a collection of Archbishop Marcel Lefebvre’s sermons, classes and notes on the Holy Sacrifice of the Mass …a compendium of what he taught on the Mass – its rites, spirit, prayers, theology, spirituality, and grace.  325 pages, softcover.

Send Inquiry for The Mass of All Time

“During the Holy Sacrifice of the Mass, revelation, the mysteries of Faith, the mysteries of the Incarnation and the Redemption, are made real. From the Mass, the liturgical and unbloody re-presentation of Christ’s sacrifice on the Cross, the efficacy of all good works proceeds.” Archbishop Marcel Lefebvre.

The Mass of All Time is a collection of Archbishop Marcel Lefebvre’s sermons, classes and notes on the Holy Sacrifice of the Mass …a compendium of what he taught on the Mass – its rites, spirit, prayers, theology, spirituality, and grace. Many of these texts have never been published before.

Fr. Patrick Troadec, rector of the Society of St. Pius X’s seminary in Flavigny, France, collected and organized the Archbishop’s manifold writings and speeches on the Mass and presents them here, in two parts.

Part one is a running commentary, gleaned from all the works of the Archbishop, on the prayers, parts and actions of the liturgy. Part two covers the New Order of Mass promulgated by Pope Paul VI in 1969 and includes commentary on liturgical history, the liturgical revolution and the history of the SSPX’s defense of the old and rejection of the new. Again, the words are those of Archbishop Lefebvre, woven together by Fr. Troadec.

The Archbishop is known for his courageous defense of the Tridentine Mass but never before have his insights been collected in such an accessible and complete format. Especially now, with a renewed interest in the “extraordinary form” due to the Holy Father’s motu proprio, this book is ideally timed because it is primarily a “positive” book coming from him who is too often known as the “Rebel” or “Renegade” Archbishop.

Here we see the love and depth of understanding that Marcel Lefebvre had for the Mass of all time. Polemics are not excluded, but they take a back seat in this volume. With the release of the motu proprio, it seems there has never been a more ideal time for traditionalists AND those new to the “Old” Mass to see this side of Archbishop Marcel Lefebvre …indeed, the more important side as it was his love of truth and the Mass as handed on to him that fueled his battle to defend it. 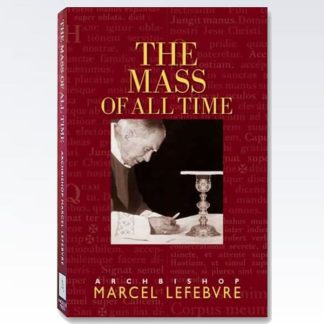