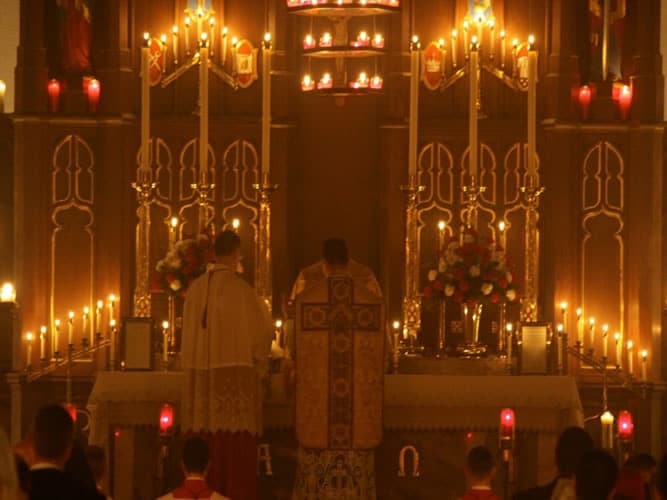 The use of lights as an adjunct to worship goes back to the beginning of the Church, and even farther. Among the Jews and in many pagan rites the use of lights had long been looked upon as appropriate in connection with public homage to their God or gods. It is probable that among Christians they were first employed simply to dispel darkness, when the sacred mysteries were celebrated before dawn, as was the custom, or in the gloom of the catacombs; but the beautiful symbolism of their use was soon recognized by the writers’ of the early Church.

The Symbolism of Candles

Light is pure; it penetrates darkness; it moves with incredible velocity; it nourishes life; it illumines all that comes under its influence. Therefore it is a fitting symbol of God, the All-Pure, the Omnipresent, the Vivifier of all things, the Source of all grace and enlightenment. It represents also our Blessed Saviour and His mission. He was “the Light of the world,” to enlighten “them that sit in darkness and in the shadow of death’.

Even the use of wax has its symbolic meaning. The earlier fathers of the Church endeavored always to seek out the mystical significance of Christian practices, and one of them thus explains the reason for the Church’s law requiring candles to be of beeswax: “The wax, being spotless, represents Christ’s most spotless Body; the wick enclosed in it is an image of His Soul, while the glowing flame typifies the Divine Nature united with the human in one Divine Person.” Others say that the blessing of candles on the day of the Presentation was suggested by the words of Simeon, who spoke of Our Lord as “the light to the revelation of the Gentiles, and the glory of Thy people Israel.” (Lu. 2, 32)

The Blessing of Candles

On the second of February, the Church celebrates the festival of the Purification of the Blessed Virgin, which may be considered as the conclusion of the series of feasts that center around the stable of Bethlehem. Christmas Day presents to us the birth of the Redeemer; the Epiphany commemorates His manifestation to the Gentiles; and the Purification reminds us of the offering of our Saviour in the temple by His blessed Mother, as the Victim who should reconcile God and man. This day has been chosen by the Church for a very important ceremony, the solemn blessing of candles, whence the day is often called Candlemas.

Candlemas: The Mass of the Candles

Why is this ceremony performed on the feast of the Purification? Probably because on or about that day the Roman people, when pagan, had been accustomed to carry lights in processions in honor of one of their deities; and the Church, instead of trying to blot out entirely the memory of this pagan festival, changed it into a Christian solemnity-thereby honoring the Blessed Mother of God by assigning to one of her feast days the solemn blessing of candles for Christian services. The prayers which are used in this blessing are quaint and beautiful, and express well the mind of the Church and the symbolic meaning of the candles. God, the Creator of all things, Who by the labor of the bees has produced this wax, and Who on this day fulfilled His promise to blessed Simeon, is besought to bless and sanctify these candles, that they may be beneficial to His people, for the health of their bodies and souls; that the faithful may be inflamed with His sweetest charity and may deserve to be presented in the temple of His eternal glory as He was in the temple of Sion; and that the light of His grace may dispel the darkness of sin in our souls.

The Uses of Blessed Candles

The candles used for liturgical services should be at least for the greatest part beeswax. This is clearly stated in the rubrics of the Missal and in various decrees of the Sacred Congregation of Rites. This is also demanded by the wording of many prayers in the Missal for the blessing of candles and by the symbolism expressed therein.

Moreover, the Church has explicitly forbidden the use of candles made of stearine, paraffin or tallow for liturgical purposes or upon the altar at any time. Candles are used at the administration of all the sacraments except Penance for all the others are usually given solemnly, while Penance is administered privately. They are lighted at Mass and other church services, at the imparting of certain blessings, in processions and on various other occasions.

The custom of placing lighted candles on our altars goes back, probably, only to about the eleventh century before which time they were left standing in tall candlesticks on the floor of the sanctuary or in brackets affixed to the walls. At Masses, candles are used as follows: At a solemn Mass six are lighted on the altar. At a Missa Cantata, sung by one priest, four are sufficient. At a Pontifical Mass, sung by a bishop in his own diocese, seven are lighted. Four are used at a bishop’s private Mass, and two at all other Masses. These rules, however, do not prohibit the use of more candles on occasions of special solemnity. Bishops and certain other prelates have the right to use a reading candle, called a bugia, at their Masses.

At Vespers, six candles are lighted on the more solemn feasts; four only will suffice on other days. In the processions to the sanctuary before solemn services two candles are borne by acolytes, and these are also carried to do honor to the chanting of the Gospel and to the singing of certain parts of Vespers, etc.

The use of votive candles has become very general in many churches. They are usually not blessed candles, and are, therefore, not sacramentals. They are commonly placed in large numbers in a candle holder of special form, before some statue or shrine, and are lighted by the people themselves, who give a suitable donation for the privilege.

A votive candle signifies literally that the lighting is done in fulfillment of a vow (Latin, votum), although in most cases the intention is merely to give honor and to manifest devotion to the saint before whose image the candle is lighted. In 1932 the Cardinal Vicar of Rome forbade such candles in the churches of the city, suggesting instead the offering of real beeswax candles for their proper use on the altar.

Such is the spirit of our Church in regard to blessed candles. The faithful in general have come to look upon them as among the most efficacious of the sacramentals. Every Catholic home should have one or more, to be used when the sacraments are to be administered; and when death approaches, it is a beautiful and pious custom to place in the hand of the dying Catholic a blessed candle, the light of which is an image of the faith which he has professed before the world, the grace which God has given to his soul, and the eternal glory to which he is destined.

Lamps in Our Churches

It may be well to mention here the use of lamps as an adjunct to Catholic worship for, though they are not sacramentals, they have had from very early times a sacred character. In the catacombs, they were used not only to give light but to honor the remains of martyrs. Lamps, usually consisting of hanging glass vessels filled with olive oil or beeswax, often of very beautiful and costly design, are used in the Catholic Church as tokens of honor. At least one such lamp must burn day and night before the Blessed Sacrament. This is known as the sanctuary lamp. Throughout the United States, it is true, the sanctuary lamp is the sure sign of the Real Presence. In other countries, however, the sanctuary lamp and the tabernacle veil (conopaeum) together form the correct and unmistakable signs of the Real Presence. Extra lamps of this kind may be lit, provided their number is uneven. Similar lamps may be burned before other altars, shrines, images, etc., as long as the conopaeum over and around the tabernacle signifies the presence of the Eucharistic Lord.

Source: “The Externals of the Catholic Church – A Handbook of Catholic Usage” By MSGR. JOHN F. SULLIVAN.