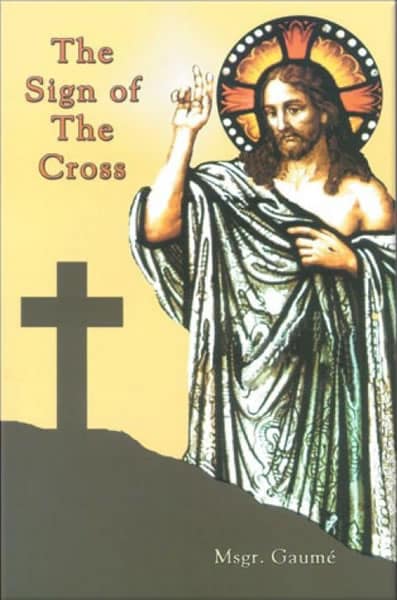 Mgr. Jean-Joseph Gaume has compiled a magnificent collection of history and commentary from the saints and fathers and doctors, as well as his own meditations and exhortations regarding this most powerful prayer. With the Brief of His Holiness, Pope Plus IX, who attaches, to the Sign of the Cross, an indulgence of Fifty Days.

BRIEF OF HIS HOLINESS PIUS IX, POPE.
FOR ETERNAL REMEMBRANCE.

Being fully certain that the salutary mystery of the redemption and the divine virtue are contained in the Sign of the Cross of our Lord Jesus Christ, the faithful of the primitive Church made the most frequent use of this sign, as we learn from the most ancient and notable monuments. It was even by this sign that they began all their actions. “At all our steps, all our motions, our incomings and outgoings, lighting the lamps, sitting down to table, taking a seat; whatever we do, or whithersoever we go, we mark our foreheads with the Sign of the Cross,” says Tertullian.

Considering these things, we have judged proper to reawaken the piety of the faithful towards the salutary sign of our Redemption, by opening the heavenly treasures, in order that, imitating the beautiful example of the early Christians, they may not blush at making frequently, openly, and publicly the Sign of the Cross, which is the standard of the Christian militia. Therefore, confiding in the mercy of the Almighty God, and in the authority of His blessed apostles, Peter and Paul, we grant, in the accustomed manner of the Church, to all and every one of the faithful of both sexes, every time that, at least, contrite in heart, and adding the invocation of the Blessed Trinity, they make the sign of the cross, fifty days indulgence for the penances which would have been imposed or that they should do for any reason whatever; we moreover grant mercifully in the Lord, that these indulgences may be applied, in the way of suffrage, to the souls who have departed this life in the grace of God.

Notwithstanding all things to the contrary, these presents shall be in perpetuity. It is also our will that the same credit be given to any written or printed copy of these presents, signed by a public notary, having the seal of an ecclesiastical dignitary, as would be given to these presents themselves, if they were shown or exhibited. Also, that a copy of these letters be taken to the Office of the Secretary of the Sacred Congregation of Indulgences and Holy Relics, under pain of nullity, conformably to the decree of the said Congregation, dated January 19th, 1756, approved by our predecessor of holy memory, Pope Benedict XIV, the 28th of the same month and the same year.

Given at Rome, at St. Peter’s, under the ring of the Fisherman, the 28th of July, 1863, the eighteenth of our Pontificate. N. CARDINAL PARACCIANI CLARELLI.

These present apostolic letters, in the form of a Brief, dated July 28th, 1863, were presented at the Office of the Secretary of the Sacred Congregation of Indulgences on the 4th of August of the same year, conformably to the decree of the same Sacred Congregation, under date of the 14th of April, 1856. In testimony of which, given in Rome at the same Office, the day and year as mentioned above. A. ARCHBP. PRINZIVALLI, Substit.

“Let us not then be ashamed to confess the Crucified. Be the Cross our seal made with boldness by our fingers on our brow and in everything; over the bread we eat, and the cups we drink; in our comings in, and goings out; before our sleep, when we lie down and when we awake; when we are in the way and when we are still. Great is that preservative; it is without price, for the poor’s sake; without toil, for the sick, since also its grace is from God. It is the Sign of the faithful, and the dread of evils; for He has triumphed over them in it, having made a shew of them openly; for when they see the Cross, they are reminded of the Crucified; they are afraid of Him, Who hath bruised the heads of the dragon. Despise not the Seal, because of the freeness of the Gift; but for this rather honor thy Benefactor.” St. Cyril of Jerusalem (AD 386), Bishop of Jerusalem.

In nomine Patris, et Filii, et Spiritus Sancti. Amen.
In the Name of the Father, and of the Son, and of the Holy Ghost. Amen.