Msgr. Gaume has compiled a magnificent collection of history and commentary from the saints and fathers and doctors, as well as his own meditations and exhortations regarding this most powerful prayer. 157 pages, Softcover.

The Holy Sign of the Cross is the most important prayer and symbol of our Catholic faith. It is at once the image of Christ’s passion, the sign of the redemption of all mankind, the awesome testament of the destruction of the power of the devil and of his kingdom on earth. The resurrection is the promise and seal and guarantee of eternal life which consummated the work of the Cross.

Christians rejoice and the demons tremble to see the Sign of the Cross emblazoned everywhere as proof of Christ’s victory over the world. Christ said “all power is given to me in heaven and on earth” and the Cross is the seat of that power. There is no place on earth where a person who makes the Sign of the Cross is not immediately recognized as a Catholic, and there is no miracle that has not been worked under this sign. It is the “nuclear bomb” of prayers and with it the faithful can clear away all enemies and temptations with the simplest of wordless gestures.

Msgr. Gaume has compiled a magnificent collection of history and commentary from the saints and fathers and doctors, as well as his own meditations and exhortations regarding this most powerful prayer. An entire book on the Sign of the Cross might seem boring – trust me, it is absolutely fascinating. You will never make this holy sign in haste again.

PREFACE TO THE FIRST EDITION: In the month of November of the year 1862, a young German Catholic of great distinction arrived in Paris to pursue his course in the College of France. Faithful, according to the traditional usage of his country, to make the Sign of the Cross before and after meals, he, on the first day, became the wonder of his school-companions. The next day, in virtue of the freedom of worship, he was the object of their mockeries. In one of his visits, he begged us to tell him what we thought of the practice, of which his companions were trying to make him ashamed, and of the Sign of the Cross in general. The following letters are intended as an answer to those two questions.

SECOND LETTER. Examination of the Question — Prepossessions in favor of the early Christians — First prepossession, their lights — Second, their sanctity — Third, the practice of true Christians in every age — Were the Fathers of the Church great geniuses?

THIRD LETTER. Continuation of the third prepossession: The Doctors of the East and West — Constantine, Theodosius, Charlemagne, St. Louis, Bayard, Don John of Austria, Sobieski — Fourth prepossession, the conduct of the Church — Fifth prepossession, those who do not make the Sign of the Cross — Summary.

THIRTEENTH LETTER. Effects of the Sign of the Cross in the temporal order — It cures all diseases, and removes whatever can harm us — It gives sight to the blind, hearing to the deaf, speech to the dumb, the use of their limbs to the lame and paralyzed; cures other maladies, and restores life to the dead.

FOURTEENTH LETTER. The Sign of the Cross a preservative against all that could injure life or health — It appeases tempests — Extinguishes fire — Protects us against accidents — Opposes a barrier to floods — Causes the waters to return to their bounds — Keeps ferocious beasts at a distance — Preserves from poison, from thunderbolts — Makes creatures the instruments of prodigies.

EIGHTEENTH LETTER. Honor commands us to pray before and after meals — Prayer over food is as ancient as the world, as wide-spread as the human race — Proofs: Benedicite and Grace of every people — Not to say them is to liken ourselves to beings which do not belong to the human species — The blessing at table is a law of humanity.

NINETEENTH LETTER. Reasons for the blessing of the table — It is an act of freedom — Three tyrants; the world, the flesh, the Devil — Triple victory of the Sign of the Cross and prayer over food — Victory over the world: proofs — Over the flesh: proofs — Over the demon: proofs — Remarkable testimony of Porphyrius — Facts cited by St. Gregory — Conclusion.

TWENTY-SECOND LETTER. Sentence of the judgment between us and the first Christians — First obligation, to make the Sign of the Cross boldly, to make it often, and to make it well — Reasons for making it boldly — Disgrace and danger of not making it — State of the physical and moral health of the world at the present day. 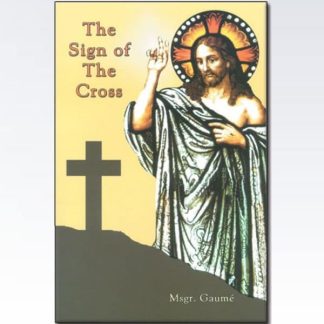