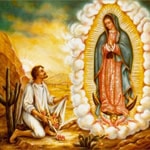 In 1531, a “Lady from Heaven” appeared to a poor Indian at Tepeyac, a hill northwest of Mexico City. She identified Herself as the Mother of the True God, instructed him to have the bishop build a temple on the site, and left an image of Herself imprinted miraculously on his tilma, a poor quality cactus-cloth, which should have deteriorated in 20 years, but which shows no sign of decay 471 years later, and today still defies all scientific explanations of its origin. It apparently even reflects in Her eyes what was in front of Her in 1531!

The Lady asked to be called “the ever-virgin Holy Mary of Guadalupe”. Why should the Virgin Mary, when appearing to an Indian in recently-conquered Mexico, and speaking to him in Nahuatl, call Herself “of Guadalupe”, a Spanish name? Did She want to be called de Guadalupe because of the statue of Our Lady of Guadalupe in Estremadura, Spain?

It is believed that the name “Guadalupe” came about because of the translation from Nahuatl to Spanish of the words used by the Virgin during the Apparition to Juan Bernardino, the ailing uncle of Juan Diego. It is believed that Our Lady used the Aztec Nahuatl word of coatlaxopeuh which is pronounced “quatlasupe” and which sounds remarkably like the Spanish word Guadalupe.Coa meaning serpent, tla being the noun ending which can be interpreted as “the”, while xopeuh means to crush or stamp out. So Our Lady must have called Herself the one “who crushes the serpent.”

We must remember that the Aztecs offered annually at least 20,000 men, women, and children in human sacrifice to their gods. The early Mexican historian Ixtlilxochitl estimated that one out of every five children in Mexico was sacrificed. The climax of these ritual killings came in 1487 for the dedication of the new, and richly decorated with serpents, temple of Huitzilopochtli, in Tenochtitlan (now Mexico City), when in a single ceremony that lasted for four days and four nights, with the constant beating of giant drums made of snakeskin, the Aztec ruler and demon worshiper Tlacaellel presided over the sacrifice of more than 80,000 men.

Certainly, in this case, the Virgin Mary crushed the serpent (as it is written in the Book of Genesis, “a woman shall crush your head”) by putting an end to these barbaric human sacrifices, and a few years later, millions of the natives were converted to Christianity.

Today, the ancient serpent is certainly achieving big hits in its attack upon human life. Millions of unborn children are killed every year around the globe, in procedures that in some countries are not only legal but are also officially supported and financed. This is why Our Lady of Guadalupe has been chosen by the Church as the Protectress of the Unborn, to put an end to abortions.

The present Basilica of Guadalupe was constructed on the site of an earlier 16th-century church that was finished in 1709, the Old Basilica. When this basilica became dangerous, due to the sinking of its foundations, a modern structure called the New Basilica was built nearby, between 1974 and 1976; the original image of the Virgin of Guadalupe is now housed in this New Basilica.

An incredible list of miracles, cures, and interventions are attributed to Our Lady of Guadalupe. Yearly, an estimated 10 million visit Her Basilica, making Her Mexico City home the most popular Marian shrine in the world, and the most visited Catholic church in the world next to the Vatican.

Read more about “The Apparition of Our Lady of Guadalupe in 1531” from the article published in  2002 issue of “Michael”.

NOVENA TO OUR LADY OF GUADALUPE

Our Lady of Guadalupe, according to THY message in Mexico I venerate THEE as the Virgin Mother of the true God for whom we live, the Creator of all the world, Maker of heaven and earth. In spirit I kneel before thy most holy image which thou didst miraculously imprint upon the cloak of the Indian Juan Diego, and with the faith of the countless numbers of pilgrims who visit thy shrine, I beg thy for this favor:

Remember, O Immaculate Virgin, the words thou hast spoken to thy devout client: “I am a merciful mother to thee and to all thy people who love me and trust in me and invoke my help. I listen to their lamentations and solace all their sorrows and sufferings.” I beg thee to be a merciful mother to me, because I sincerely love thee and trust in thee and invoke thy help. I entreat thee, our Lady of Guadalupe, to grant my request, if this should be the will of God, in order that I may bear witness to thy love, thy compassion, thy help and protection. Do not forsake me in my needs.

Recite “Our Lady of Guadalupe, pray for us” and Hail Mary three times.

Say this novena nine times in a row for nine days in a row. The nine times per day do not have to be immediately in succession but can be said throughout the day, provided one keeps a continual spirit of prayer in between, that is one is not watching television, etc., but doing one’s duty while giving oneself to Our Lord and Our Lady.