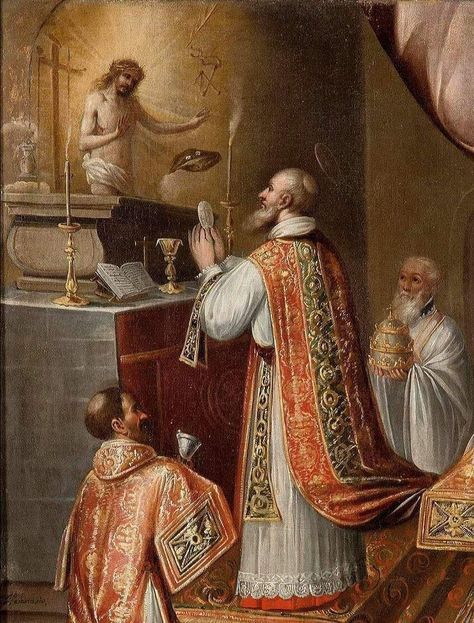 “Where there is no Mass,” writes one of the Fathers of the English Oratory, “there is also no Christianity.”

The reason is plain: Christ’s life was one of sacrifice—not merely of the figurative sacrifice of praise and prayer, but one of outward act, of suffering and of death His religion must be like Himself: it must be the continuation of the divine-human life that He led upon earth, representing and perpetuating, by some sacred rite, the sacrifice that began in the womb of Mary and ended upon the Cross of Calvary. That rite is the holy Mass. Do we always realize it as such? Does the conviction sink deep into us, when offering, or assisting, at the adorable Sacrifice, that Jesus is re enacting, in our presence, the mysteries of His life and death?

The altar of the Mass is the holy house of Nazareth, the crib of Bethlehem, the Egyptian place of exile, the hill of Calvary, the garden-tomb in which Our Saviour’s corpse reposed, and the Mount of Olives from which He ascended. The Passion, it is true, is that which is primarily represented and continued in the holy Mass; yet the prayers and rites of the Sacrifice refer, at times, to other mysteries. Thus the dropping of a part of the sacred Host into the Chalice, before the Agnus Dei, represents the reunion of Christ’s soul with His body and blood on the morning of the Resurrection. For a description of the many and beautiful analogies between the eucharistic life of Our Lord and His sacred Infancy, we refer the reader to Father Faber’s Treatise on the Blessed Sacrament.

The Mass is truly a “hidden treasure,” and, alas, our cold, dead faith allows it to remain so. If we valued it as we ought, we would hurry every morning to the church, careless of the snows of winter and the heats of summer, in order to get a share of the riches of this treasure.

The saints knew the value of one Mass: that was a dark day in their calendar on which they were deprived of the happy privilege of saying or hearing Mass. Although St. Francis de Sales was overburdened with apostolic work on the Mission of the Chablais, he made it a point never to miss his daily Mass. In order to keep his holy resolution, he had frequently to cross the river Drance, to the village of Marin, in which there was a Catholic church. It happened, in the winter of 1596, that a great freshet carried away a portion of the bridge over the stream, and the passengers were, in consequence, compelled to cross on a plank laid over those arches of the broken structure that had withstood the waters. Heavy falls of snow, followed by severe frosts, made this board very slippery, so that it became dangerous to attempt passing on it; but St. Francis was not to be deterred, for, despite the remonstrances of his friends, he made the perilous journey every morning, creeping over the icy plank on his hands and feet, thus daily risking his life rather than lose Mass.

Dear Christian reader! beg this glorious Saint to obtain for you and me some portion of his burning love for the most holy and adorable Sacrifice of the altar.

Pious Reflections of the Holy Sacrifice of the Mass

“The Holy Mass is a prayer itself, even the highest prayer that exists. It is the Sacrifice, dedicated by our Redeemer at the Cross, and repeated every day on the Altar. If you wish to hear Mass as it should be heard, you must follow with the eye, heart and mouth all that happens at the Altar. Further you must pray with the Priest the holy words said by him in the Name of Christ and which Christ says by him. You have to associate your heart with the holy feelings which are contained in these words and in this manner you ought to follow all that happens at the Altar. When acting in this way you have prayed Holy Mass.” ~ Pope Saint Pius X.