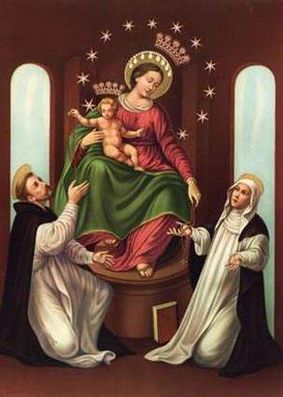 For the Feast of THE MOST HOLY ROSARY – [October 7]

It is customary with men of the world to balance their accounts at the end of the year, and ascertain their profits. The Church is now preparing to do the same. We shall soon see her solemnly numbering her elect, taking an inventory of her holy relics, visiting the tombs of those who sleep in the Lord, and counting the sanctuaries, both new and old, that have been consecrated to her divine Spouse. But today’s reckoning is a more solemn one, the profits more considerable: she opens her balance-sheet with the gain accruing to our Lady from the mysteries which compose the cycle. Christmas, the cross, the triumph of Jesus, these produce the holiness of us all; but before and above all, the holiness of Mary. The diadem which the Church thus offers first to the August Sovereign of the world, is rightly composed of the triple crown of these sanctifying mysteries, the causes of her joy, of her sorrow, and of her glory. The joyful mysteries recall the Annunciation, the Visitation, the Birth of. Jesus, Mary’s Purification, and the Finding of our Lord in the temple. The sorrowful mysteries bring before us the Agony of our blessed Lord, His being scourged, and crowned with thorns, the carrying of the cross, and the Crucifixion. While, in the glorious mysteries, we contemplate the Resurrection and Ascension of our Saviour, Pentecost, and the Assumption and Coronation of the Mother of God. Such is Mary’s rosary; a new and fruitful vine, which began to blossom at Gabriel’s salutation, and whose fragrant garland. form a link between earth and heaven.

In its present form, the rosary was made known to the world by St. Dominic at the time of the struggles with the Albigensians, that social war of such ill-omen for the Church. The rosary was then of more avail than armed forces against the power of satan; it is now the Church’s last resource. It would seem that, the ancient forms of social prayer being no longer relished by the people, the Holy Spirit has willed by this easy and ready summary of the liturgy to maintain, in the isolated devotion of these unhappy times, the essential of that life of prayer, faith, and Christian virtue, which the public celebration of the Divine Office formerly kept up among the nations. Before the thirteenth century, popular piety was already familiar with what was called the Psalter of the laity, that is, the angelical salutation repeated one hundred and fifty times; it was the distribution of these Hail Marys into decades, each devoted to the consideration of a particular mystery, that constituted the rosary. Such was the divine expedient, simple as the eternal Wisdom that conceived it, and far-reaching in its effects; for while it led wandering man to the Queen of Mercy, it obviated ignorance which is the food of heresy, and taught him to find once more ‘the paths consecrated by the Blood of the Man-God, and by the tears of His Mother.’

Thus speaks the great Pontiff who, in the universal sorrow of these days, has again pointed out the means of salvation more than once experienced by our fathers. Leo XIII, in his encyclicals, has consecrated the present month to this devotion so dear to heaven; he has honoured our Lady in her litanies with a new title, Queen of the most holy rosary; and he has given the final development to the solemnity of this day, by raising it to the rank of a second-class feast, and by enriching it with a proper Office explaining its permanent object. Besides all this, the feast is a memorial of glorious victories, which do honour to the Christian name. Soliman II, the greatest of the Sultans, taking advantage of the confusion caused in the west by Luther, had filled the sixteenth century with terror by his exploits. He left to his son, Selim II, the prospect of being able at length to carry out the ambition of his race: to subjugate Rome and Vienna, the Pope and the emperor, to the power of the crescent. The Turkish fleet had already mastered the greater part of the Mediterranean, and was threatening Italy, when, on October 7, 1571, it came into action, in the Gulf of Lepanto, with the pontifical galleys supported by the fleets of Spain and Venice. It was Sunday; throughout the world the confraternities of the rosary were engaged in their work of intercession. Supernaturally enlightened, St. Pius V watched from the Vatican the battle undertaken by the leader he had chosen, Don John of Austria, against the three hundred vessels of Islam. The illustrious Pontiff, whose life’s work was now completed, did not survive to celebrate the anniversary of the triumph; but he perpetuated the memory of it by an annual commemoration of our Lady of Victory. His successor, Gregory XIII, altered this title to our Lady of the rosary, and appointed the first Sunday of October for the new feast, authorizing its celebration in those churches which possessed an altar under that invocation.

A century and a half later, this limited concession was made general. As Innocent XI, in memory of the deliverance of Vienna by Sobieski, had extended the feast of the most holy name of Mary to the whole Church; so, in 1716, Clement XI inscribed the feast of the rosary on the universal calendar, in gratitude for the victory gained by Prince Eugene at Peterwardein, on August 5, under the auspices of Our Lady of the Snow. This victory was followed by the raising of the siege of Corfu, and completed a year later by the taking of Belgrade. [In 1913, Pope Pius X moved the feast of The Most Holy Rosary to October 7]