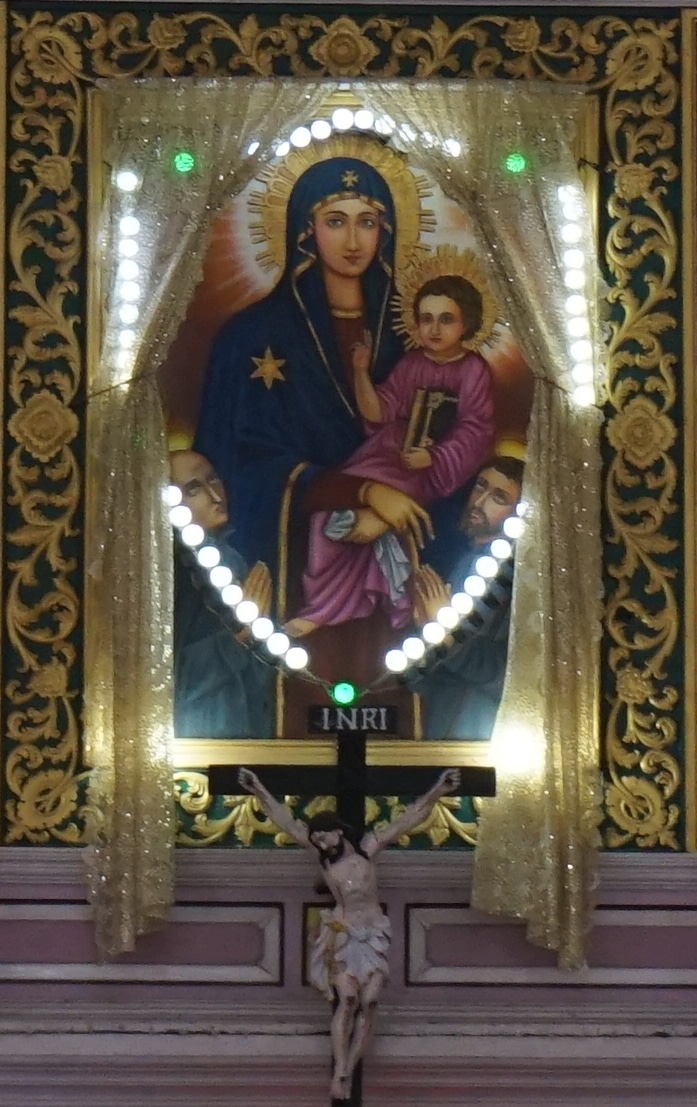 Prayer : Our Lady of the Snows, Immaculate Queen of the Universe, from this privileged sanctuary, Thou has bestowed so many countless graces and pledges of love upon the hearts and souls of millions. O Mother, from this cradle of Christianity, this Mother Church of all churches, deign to shower forth the graces of thine Immaculate Heart upon the remnant Faithful throughout the world, wherever they may be, and grant them the graces of a childlike love and unwavering fidelity to the holy truths of our Faith. Grant, good Mother, to the faithful Bishops of the Church the grace to defend Her Sacred Teachings, and to persevere courageously against all the enemies of the Holy Church. Amen.

The Catholic Church celebrates today the annual feast of the dedication of a very remarkable church at Rome, called St. Mary Ad Nives–” St. Mary of the Snow,” or ” St. Mary Major.” The origin of this church is as follows: In the middle of the fourth century, at the time of Pope Liberius, there resided at Rome a nobleman named John. Although rich in temporal goods, he was still wealthier in those which are not of this world, and his wife was his equal in birth, riches and virtue. They had been married many years without having been blessed with children, although they had often prayed to God for them. At last, they resigned themselves to the will of Providence, and resolved to employ all their wealth in honor of the Blessed Virgin, and make her heir to it, as they had always entertained great devotion for her. They were, as yet, uncertain as to the manner in which they should carry out their intention. They both sought refuge in prayer and alms, begging the Blessed Virgin to teach them how they might best appropriate their possessions to her honor.

Mary, the Divine Mother, deigned to make her wishes known to them. Appearing to them both in the night, she told them to go, on the following day, which was the fifth of this month, to the Aesquiline mount, in Rome, and to build a church in her honor on the spot which they would find covered with snow. This, she added, would be more agreeable to her than anything else they could do. When they awoke next morning and told each other their dream or rather their vision, they were filled with inexpressible joy, and immediately repaired to Pope Liberius to hear his opinion on the subject. As the Pope had had the same vision the same night, there was no longer reason to doubt the truth of the revelation. Assembling the clergy and people without delay, the Pontiff formed a procession to go to the appointed spot.

When they arrived there, they saw, in truth, a place large enough for a church, covered with snow. All were greatly surprised at this, which they could not but consider a miracle, since it was in the midst of summer, on the fifth of August, when neither in Rome nor within many miles of it, any snow could naturally have fallen. The pious couple drew from this fact the greatest comfort, as it was an indication that the Almighty and the Blessed Virgin were pleased with their intention. Therefore, hesitating no longer, they forthwith made all the necessary preparations for building a magnificent temple. The building was begun and very soon completed. All that was needed for its erection, as well as for its maintenance, was joyfully furnished. Pope Liberius most solemnly consecrated the new temple; and all the faithful went to it to venerate the Queen of Heaven. At first, this church was called the Basilica, signifying a palace, or the Liberian Basilica, on account of its royal magnificence. It was also called St. Mary ad Nives, for the reason mentioned above. Today it is known as the St. Mary Major, or the Great, as it is the greatest of all the churches of Rome built in honor of the Blessed Virgin, on account of its origin, magnificence and rich endowment. It is also called St. Mary ad Praesepe–St. Mary of the Manger–because in one of its chapels, the crib or manger, in which the new-born Saviour was placed by His virgin mother, is kept.

Pope Gregory the Great, in 509, formed and led the great procession, celebrated in the annals of the church, to implore God, through the intercession of Mary, to avert the dreadful pestilence which ravaged Rome. Its fury somewhat abated, but as it was still in the city, the Pope, in the following year, formed a second procession, headed by the picture of the Blessed Virgin painted by St. Luke, which is kept in the church of St. Mary ad Nives. During the procession, the pestilence left all those houses by which the picture passed, until, at last, when the faithful dispersed, the whole city was free from the terrible scourge. Another miraculous event occurred during the procession, which must not be omitted. Angels were heard singing: “Rejoice, O Queen of Heaven, Alleluia. He whom thou didst deserve to bear, Alleluia! is risen as He said, Alleluia!” The holy Pope, prostrating himself with all the people, finished the angels’ hymn of praise with the words: “Pray for us to God, Alleluia!” When the procession had reached the Mausoleum, or tomb of the Emperor Adrian, the Pope saw upon its summit an angel sheathing his sword, as a sign that the wrath of the Almighty was appeased by the intercession of Mary, and that the pestilence which had so long ravaged the city, would disappear. The rejoicing of the people, and the devotion which was from that time shown to the miraculous picture of the Blessed Virgin, cannot be worthily described.

Those who are not Catholics and who blame us for our veneration of the Queen of Heaven and for the churches built in her honor, may see by the origin of the church of St. Mary ad Nives, how ancient this pious practice is, and how agreeable to God. The building of this celebrated church took place in the fourth century, at a time when Protestants themselves say that the Catholic Church was still the true Church of God. Even at that remote period, Mary was venerated and churches were built in her honor. The church approved of it, and God confirmed it by special miracles. Who dares say that the Church of Christ erred, and that God Himself confirmed that error by a miracle? Even in countries where the population has ceased to be Catholics, we find ancient churches which were built in honor of the Blessed Virgin. Surely, if all Catholics were silent on the subject, the very stones of these sacred edifices would prove the devotion of the early ages to the Divine Mother. Would any one dare to accuse the pious Christians, who built these churches, of having erred? This would be no less foolish than arrogant. Why then do they oppose the church of ancient date? My Catholic reader, take my advice. Let no one disconcert you in your devotion to the Queen of Heaven, and never become cold in her service.