The Secret of the Rosary

Send Inquiry for The Secret of the Rosary

The Secret of the Rosary eBook can be downloaded free of charge from Virgo Sacrata library: The Secret Of The Rosary download PDF file.

The author of The Secret of the Rosary and the originator of total consecration to Mary, St. Louis-Marie Grignion De Montfort (1673-1716) remains one of the greatest apostles of Marian devotion the world has ever known. As a young priest, De Montfort dedicated himself to preaching to the people. This highly gifted orator’s language was simple but full of divine love, much as you will find in True Devotion to Mary. De Montfort’s whole life was marked by constant prayer, love for the poor and holy joy in humiliations and persecutions. De Montfort was canonized by Pius XII in 1947.

The Rosary is made up of two things: mental prayer and vocal prayer. In the Rosary mental prayer is none other than meditation of the chief mysteries of the life, death and glory of Jesus Christ and of his blessed Mother. Vocal prayer consists in saying fifteen decades of the Hail Mary, each decade headed by an Our Father, while at the same time meditating on and contemplating the fifteen principal virtues which Jesus and Mary practiced in the fifteen mysteries of the Rosary.

“I beg of you to beware of thinking of the Rosary as something of little importance – as do ignorant people, and even several great but proud scholars. Far from being insignificant, the Rosary is a priceless treasure which is inspired by God.

Almighty God has given it to you because he wants you to use it as a means to convert the most hardened sinners and the most obstinate heretics. He has attached to it grace in this life and glory in the next. The saints have said it faithfully and the Popes have endorsed it.”

When Saint Dominic was preaching the Rosary near Carcassone, an Albigensian was brought to him who was possessed by the devil. Saint Dominic exorcised him in the presence of a great crowd of people; it appears that over twelve thousand had come to hear him preach.

During the exorcism, the demon was forced to speak the following about devotion to the Mother of God: “Listen well, you Christians: the Mother of Jesus Christ is all-powerful, and She can save Her servants from falling into hell. She is the Sun which destroys the darkness of our wiles. It is She who uncovers our hidden plots, breaks our snares, and makes our temptations useless and ineffectual.

“We have to say, however reluctantly, that not a single soul who has really persevered in Her service has ever been damned with us; one single sigh that She offers to the Blessed Trinity is worth far more than all the prayers, desires, and aspirations of all the saints.

“We fear Her more than all the other saints in Heaven together, and we have no success with Her faithful servants. Many Christians who call upon Her when they are in the hour of death, and who really ought to be damned according to our ordinary standards, are saved by Her intercession.

“Oh, if only that Mary (it is thus in their fury that they called Her) had not pitted Her strength against ours and had not upset our plans, we should have conquered the Church and should have destroyed it long before this, and we would have seen to it that all of the Orders in the Church fell into error and disorder.

“Now that we are forced to speak, we must also tell you this: nobody who perseveres in saying the Rosary will be damned, because She obtains for Her servants the grace of true contrition for their sins, and by means of this they obtain God’s forgiveness and mercy.” 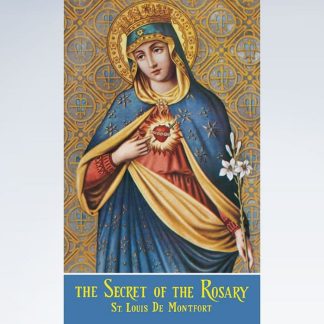 You're viewing: The Secret of the Rosary €0
Now available in flexcover binding, more durable!