Pastor Out in the Cold

This is the story of the Canadian priest Fr. Normandin, who fought for the traditional Latin Mass in Canada during the years closely following Vatican II. Softcover, 131pages.

Send Inquiry for Pastor Out in the Cold

“Pastor Out in the Cold” is the story of the Canadian priest Fr. Normandin, who fought for the traditional Latin Mass in Canada during the years closely following Vatican II. He  was unfairly removed from his office and thrown out on the street (in the extreme January cold) by the Archbishop of Montreal. His narration is invaluable as it stands, to this day, as an undismissable historical testimony. His eye-witness account of what life was like for a priest in the 1970’s attempting to remain faithful to Eternal Rome and the Mass of All Time is a reminder to us all what it was actually like in the time immediately following Vatican II.

What we enjoy today in the preservation of the Holy Sacrifice of the Mass is due to the heroic efforts of those unwavering fighters who came before us. We owe them a great debt and should be inspired by what they did and what they were able to achieve. Fr. Normandin’s is interesting to all those who value the Holy Sacrifice of the Mass because he explains how we, the next generation of Catholics, almost lost it.

”Stories like that of Father Normandin mean that this time of persecution (against Tradition) has already happened. A persecution more painful and distressing since it is controlled by the very people who have no other mission than to defend the Catholic Tradition. (…) (His) case calls for reflection on the attitude that priests must take, if they happen to be persecuted for the traditional faith. The case of Sainte-Yvette is probably not finished (he wrote this on March 25, 1976). This story will have a sequel. Whatever the future adventures, if Father Normandin and his priestly team persevere to the end in the struggle they have undertaken to defend the Catholic understanding of the Holy Sacrifice of the Mass and of the priesthood, it will be for the glory of God and the salvation of many souls.”  ~ Archbishop Marcel Lefebvre, 1975 Preface, Pastor Out in the Cold.

“To remain silent, or to withdraw into solitude would be to misunderstand their mission and, for want of courage, to shun their sacred duty. But in the event of grave canonical penalties being incurred for refusing to obey unlawful authority, such penalties, resulting from loyalty to the Traditional Roman Mass, would without question be null and void. It follows that priests are bound to ignore such sanctions, and continue with even greater courage the good fight for the faith.”
~ Archbishop Marcel Lefebvre, 1975 Preface, Pastor Out in the Cold.

“I am very pleased to recommend Father Yves Normandin’s account to all who seek an understanding of what is happening within the Catholic Church”
~ Archbishop Marcel Lefebvre, Preface, Pastor Out in the Cold. 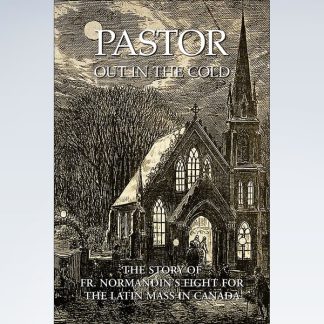